IS THE MINISTER OF DEFENCE THE SUPREME COMMANDER OF THE ARMED FORCES?

In an earlier posting I commented on the military presence during this by-election at Permatang Pasir HERE. Admiral Tojo posted this comment in my comment box:

Zorro,
what Ahmad Zahid Hamidi is doing is WRONG and tantamount to abuse of power and abuse of the Fed Constitution. The ONLY entity that can order such mobilisation is the YD Agong NOT a Minister. Did the Agong give the command?? I think you should blow this up for all to see.

Admiral, what I can only do is present what I researched, as follows.....


The Supreme Commander is the highest ranking office in the command structure of the Malaysian military. The office dates to the 1957 creation of the Malay federation. Its current role, duties and powers are regulated by the Constitution of Malaysia and the Federal Armed Forces Act. The Malaysian Constitution establishes that the office of Supreme Commander is attached to the person of the Federal Head of State.

Federal Constitution, Article 41- The Yang di-Pertuan Agong shall be the Supreme Commander of the Armed Forces

The Federal Armed Forces Act was passed by the Federal Parliament in order to consolidate in one law all the regulations governing the three services ( Army, Navy and Air Force ), it establishes the function and duties of the Federal Head of State in his capacity as Supreme Commander. 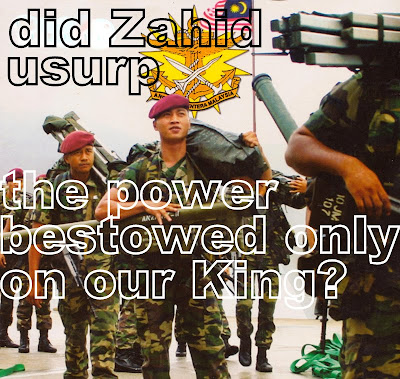 As Supreme Commander of the Armed Forces, I can presume that power to mobilise can only be the King's prerogative. This will be best answered by military personnel, past and present. Please sirs, your comments.

Ai yah,
the Army,
the Police,
the MACC,
the Judiciary,

are all branches of UMNO.

I said Monarchy is also a branch of UMNO because it has proven itself so at the Perak fiasco.

UMNO says, "Get stuff with the Federal Constitution. The will of UMNO is the law of the land"

The people say, "we will see."

Let the people of Malaysia rise up against an evil regime before it is too late.

WTF.Abusing the MAF during peace time? this will really piss all us veterans off.

"I said Monarchy is also a branch of UMNO because it has proven itself so at the Perak fiasco."

FROM POWER TO POWDER

Bro,
The use of the Forces Medical Corps in Pmg.Pasir does not need the Agong's authorization. The Minister spoke to the Chief of Defence Staff who then gave instruction to the Army Commander who will instruct the Commander of the Medical Corp to deploy a team, ostensibly misusing medications, personnel, equipment and logistics under "Hearts & Minds". If the BN is honest the priority shud have gone to Kampung Medan.
If you need a job on your retirement with LTAT or Affin Banking Gp or you wish to be a Tan Sri and get promoted, suck up to the Minister. Few army generals have moral courage. These school cert holders think of their periok nasi first.

they are still carrying this - Us vs Them mentality.

this is a cause to be concerned as this is the mentality that is leading them astray - such as killing Teoh, playing endlessly with demagogeury ...

people with such mentality are basically psychopath - unable to reason etc.

That is the problem when we have idiots around.
Typical UMNO leaders who will at any opportunity will abuse their power and too many generals that are kaki ampu and which they are very very good at.

I thought only our other BN YBs have no courage,now you tell me even the army commanders also no courage,if there's a war how?.Out of 26 million people,no one dares stand up and say NO to UMNO enough is enough.We cannot have generations after generations of pondans.

When the top executive aka the PM abuses his power as seen in the Perak fiasco, that just gives the wrong signal to all the others to follow his example.

Who was the moron who came up with the slogan: kepimpinan melalui teladan? Mamak set a very rotten example. Now Najib is following it. Who is Hamidi but another slimeball ampu bodek of the worst kind.

Well UMNO is doing everything to commit harakiri. Why not help them? That would be euthanasia. Is that a crime in Bolehland?

Dont you understand? it really is US against YOU.
You see, we know what you are all about so dont try to pull the old "gain confidence & popularity by social activism" stunts here and try to impress us.

Listen, Many of US have worked with Chinese companies in the past. Have you? I can give you many examples of how they scheme and get back at the malay staff even if they were in the same team/dept/organisation. There are many examples , too many to spell out here. We know you have been secretly hating us, because we own the land and the government. And you secretly plot to one day dominate this land, far away from your native land.

Look at Singapore. Once a Johore Sultanate. Now its like an ugly implant that was extracted from east asia. Completely different values and culture and the natives are sweeped to a corner.
just like what you did in singapore and the indians did in fiji, you want to do it here in malaysia.
You want that dont you? you are getting itchy, looking at the resources and wealth this nation has. Drolling at the thought of steering your tax dollars that you keep bitching you contribute most of.
Getting a bigger piece of the pie. Thats what you want. And you are not happy by just dominating economically, you want to do it politically too. There are alot more funds at stake there, along with resources to make more. Such as opening up our doors to the israel-USA wealth. Selling your strategic location to super powers for more funds and security.
And security you know you need, just like singapore. Surrounded by angry nusantara natives. Seeing their land annexed by foreign slit eyed weird looking beings.

been to petaling street lately? how about chow kit? bukit bintang?
seen what happens when greed is allowed to reign? seen what was behind the cosmetic front?

Why are we always fighting as though it is YOU against US , you ask. Simple, it really IS You against US.

GENERALS ALL LOST THEIR MARBLES ALREADY


PLEASE GO CHECK IN THEIR PANTS

glad i alone can take on a bunch of "cowards."

cowards that hide behind race and religion doing their murders, racism and bigotry.

Feeq,
your US do not include me and people like me and I am a Malay, well not quite, but I am a Bugis, Javanese, chinese hybrid. What about you? From your name I think there is blood from India there.

So, you keep to your us and I will keep to my me.

Yes, The DYMM YDP Agong is The Supreme Commander of the Armed Forces.But please note the Agong post is elected(changed) by the Conference of Rulers every 5 years.

As the Supreme Commander, he does NOT get involved in the daily routines of the Armed Forces, such as the deployment of the Army personnel in the above incident.

Also, All Military personnel are bounded by Regulations NOT to be involved in Politics.

BTW, the term "Mobilisation " is incorrectly used here...check out the meaning.

The above case, at best, can be classified as an Abuse. Perhaps, complaints can be made to the EC to prevent such abuses (misuse of Govt.machinery for election purposes) eg. Any govt approved projects for the benefit of the Rakyat is NOT to be announced or promised during ANY election to fish for votes (as is the current trend).

Hope the short comment above is of benefit to readers.

the "i" I alluded to you just simply doesnt want to know.

It ll blow your mind off.

UMNO power is higher than Supreme power, lest you forget, senor Zorro..