WHAT DOES A DROWNING MAN CLUTCH AT? 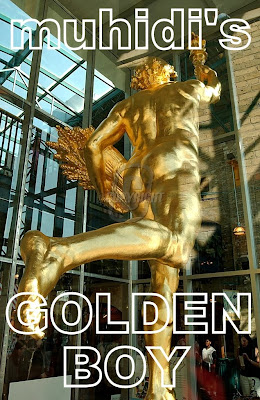 THEY clutch at any straw, the last straw hopefully! The faltering Minister of Communication has already said that PAS majority will be reduced. GAME OVER? NO says the frustrated DPM. He clutched at his last straw and promised the people of Permatang Pasir that if BN wins he will transform PP into a GOLDEN BOY. Whatever that means, nobody, not even in the UMNO camp has volunteered to fathom.

"For some 50 years BN ruled this Penang State" cited Pak Sulong at one of the warongs in Kampong Pelet, "there were no golden opportunities. We dont want anything else, except opportunities to improve our yield." He continued, " The first Cheif Minister Wong Pow Nee did a lot for us. After he was replaced, nothing much has been done except the ones in a while token fertilisers, and that only around some elections."

They don't need no Golden Boy, just a more conducive environment for them to cultivate their land, minus the disruptive floods.

Pak Sulong reads Mandarin after all !!!

Where are the creativity of the be end camp?

When Love is gone ,Silver thread and golden needle cant mend the broken heart of mine..

No more GOLDEN promises and no more swear by the Bulan and the Bintang ,All I need is the air that I breath and BREAD.

I learned how to console myself cos
Just the other night , I dreamt an impossible dream.

OMG, What? Rohi-the-cheat a golden boy. No wonder the UMNO goons have so many in their midst. One Toyo is a Indon lanun who has managed to put up his Bali istana. Another one is a dead ZD. One more to meet his maker is the Pak Uban from Sarawak who has a palace in Ottawa. Now another worm has come out with his istana kampung at Telok Gong, Klang. Many more would be exposed soon.

With so many such GOLDEN BOYS, UMNO/BN is bound to lose each and every bye-election.

The mother of all elections would be the 13th GE where UMNO/BN would be finally put to rest. RIP UMNO/BN.

We, the rakyat don't need you anymore.