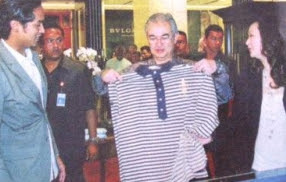 Hantu had just polished off Gyuniku Domburi, Gyoza Demplings, White Cream Korokke, Okonomiyaki, Sashimi, 5 pieces of Nigiri sushi and a plate of soba noodles.....all in one sitting at his famous Japanese haunt at the Pavillion. He was distracted by the heavy security and always a busybody he chanced upon the PM at the opening of his daughter and SIL's new boutique THE EMPEROR'S NEW CLOTHES. Hantu says that the new branded PM was presented with was the newly baptized NORSIL sports wear ideal for golf or just slouching around. 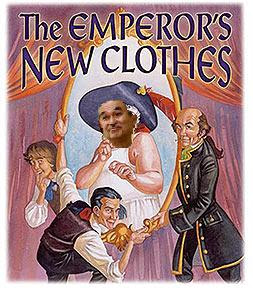 I am just wondering why the outlet has that NAME, I remember Sinead O'Connor singing this song. I couldn't download this youtube because embedding was disabled as requested. Anyway here are the lyrics of that song: SINEAD O'CONNOR
THE EMPEROR'S NEW CLOTHES
(Sinead O'Connor)

It seems like years since you held the baby
While I wrecked the bedroom
You said it was dangerous after Sunday
And I knew you loved me
He thinks I just became famous
And that's what messed me up
But he's wrong
How could I possibly know what I want
When I was only twenty-one?
And there's millions of people
To offer advice and say how I should be
But they're twisted
And they will never be any influence on me
But you will always be
You will always be
If I treated you mean
I really didn't mean to
But you know how it is
And how a pregnancy can change you
I see plenty of clothes that I like
But I won't go anywhere nice for a while
All I want to do is just sit here
And write it all down and rest for a while
I can't bear to be in another city
One where you are not
I would return to nothing without you
If I'm your girlfriend or not
Maybe I was mean
But I really don't think so
You asked if I'm scared
And I said so
Everyone can see what's going on
They laugh `cause they know they're untouchable
Not because what I said was wrong
Whatever it may bring
I will live by my own policies
I will sleep with a clear conscience
I will sleep in peace
Maybe it sounds mean
But I really don't think so
You asked for the truth and I told you
Through their own words
They will be exposed
They've got a severe case of
The emperor's new clothes
The emperor's new clothes
The emperor's new clothes

and here is the tale of the emperor's new clothes.......have a good few hours left of the weekend and Happy Chinese New Year. Be Safe People.

All in one sitting ??

the emperor's new clothes means no clothes at all, so is he telling us he (and wifey) has no clothes to sell?

the emperor's new clothes also highlighted the 2 swindlers, so is he telling us the 2 owners are swindlers?

what a name to choose! don't blame us for all the speculation!