“In the first three days of the period under monitor - Feb 25 to 27 - BN was projected to have spent a cumulative total of RM1.049 million,” said TI president Ramon V Navaratnam.

“TI also urges the Election Commission to closely scrutinise the candidates' expenses report and be prepared to lodge police reports for any under-reporting found.”

“TI urges all (political) parties to declare all their advertisement expenses and to require their candidates to report their respective share of such expenses,” said Ramon. 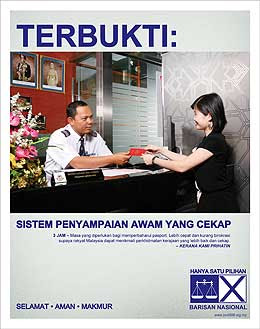 The game begins and after all these years the BN still think that they can hoodwink us. It is OK to go an a spinning spree if you have the money and the donors/sponsors, but accountability should play a role. Why feature the new alacrity of renewing a passport. This is election time and caring Malaysians usually dont travel during this time.

Why not a picture of the still missing Ninnie with an assuring caption: WHILST WE ARE SPINNING AND CONNING ( read: CAMPAIGNING) FOR YOUR VOTES OUR POLICE FORCE ARE STILL SEARCHING FOR NINNIE AND NURINE'S MURDERERS. 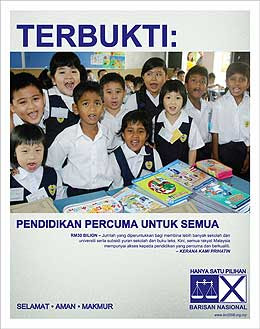 Free Education it seems! No school fees! Parents are up in arms because schools made a kill with extra fees. Some parents pay as much as RM300 per child. If you lip-read those kids (no they were not hired to pose unlike the two above) you might conclude that they are shouting: BLUFFFFFFF! 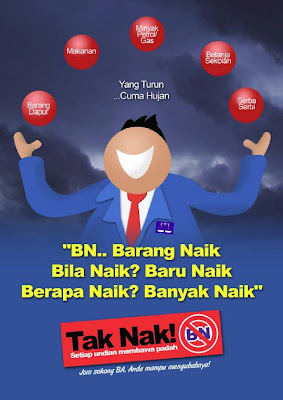 BARISAN RAKYAT PAYS NO "LIES FOR MONEY" AGENCY FOR OUR POSTERS.
IN THE SPIRIT OF BARISAN RAKYAT,
WE CREATE,
WE SHARE. 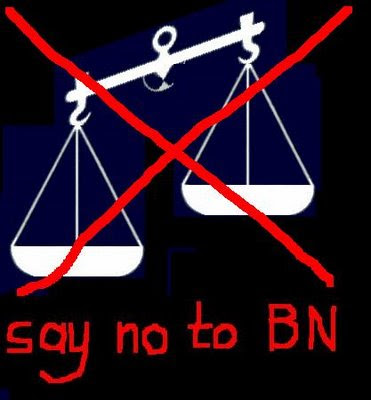 NOTHING FANCIFUL, BUT OUR VOICE IS STRIDENT, OUR MESSAGE IS CLEAR!