STAR NEEDS TO APOLOGISE TO THESE THREE MAIDENS. 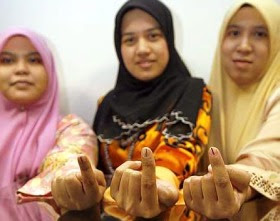 I have been shown the finger on various occasions, some in anger, some in disbelief, but mostly when I change gear from seriousness to crudeness. But I have never had a lady do that to me. So it was just disbelief when I was greeted with these three young ladies doing this into my face as I lifted my early fix of ice-nescafe in my appointed brunch outlet......and showing me emphatically at that.....and disrespectfully with the left hand. HANTU read more into this though. He says STAR is telling the SUN, "Gotcha!" or maybe they are beckoning Nades, Terrence and Jackie Surin, "come over"! DON'T. You three are made of better stuff! The Malays Mail would be the lesser of two evils. However, lets see what course the new owners of MM will take. For sure I won't read the Sun no more.Who was it who said: NO BUY NO LIES?

Care to tell us what happened? Hmmm ... pretty

vincent can afford the losses. sun is only a small part of his empire, afterall.

I believe the ladies were only showing the voting day indelible ink marks on their finger nails..

Capt Sir, I know. but I thought there could be another way to show the marked nails....like placing them on a table....or showing all the fingers instead of the index fingers.

Zorro Sir,
I would like to join you for a single malt one of these days. Let me know when.

Whats wrong with index finger? I will tell you whats wrong. It's you that 's all wrong.
Everything in this country that the Govt do, all wrong.
Show you how indelible ink looks like also wrong.
Its the middle finger that's rude or have senility gotten the best of you?
If the index finger wants to be rude, it can join the middle and have the two finger combo, that's rude
But it's all good. It's good to know that what you write here is mostly anger addled.
anyway you have said before your writing does not have to hold up to journalistic standards so this should fit right in like a glove.
take care...

Chief Clerk. Whichever finger you
use the message is universal. Anyway to each his own. However I tried the rude sign you described but couldn't...nearly developed cramped fingers. And thanks for your advise...it shall be in the KIV bank.

Godfather....1st day of CNY would be a good time at the Fisherman's Wharf, Taman Desa....after 9pm.

tell you whats wrong. the changes under this EC crony are all money consuming. millions are being spent on indleible ink and transparent boxes. asked the plastic injection experts how much does it cost for these boxes and whats the total procurement cost incurred by the EC. By the way, was there any tender?
those more important but non-monetary such as fixing the election date, more media time for the opposition and prohibited election "gifts" are left to BN. hello, EC crony you dont even have the galls to uphold your responsibility to fix the election date as spelled out in the constitution. well, guess it dovetails into your believe and plan that only BN can rule. WTF.

The ladies are saying "Its been up there."

Wonder if this indelible ink which is to be marked on the nail of the voter on election day is really fool-proof?
i am sure it can scrapped off with a blade ;-)

Mike, spot on. I have used the shaving blade to scrape off all types of ink.....especially on the nail. My contention is tht the indelible ink should be on the finger itself and not on the nail. touche Mike....at least somebody thinks like me....instead of telling me about crude signs....which i am oblivious about. again, thanks.

Uncle, you the one who was shocked to see the ladies show their fingers at you, if you not well versed why you so shocked?

It's Ok if you know a few rude signs or words, it doesn't qualify you as a dirty old man.

I will venture one suggestion why the ink is put on the fingernail and not on the skin but do remember I am not party to the deliberations of the EC, this is just my thought.

If the ink is put on the skin, it may raise concerns among Muslims who feel that it may affect their ablutions, if it is on the nails then you can scrape it off much easier. Of course this defeats the whole purpose.

Like I said before this is just my thought, of course I do not know the composition of the ink and do not know how it adheres to the skin and whether it would actually constitute a barrier before the skin that would affect Muslim ablutions

This ease of disappearance is the cause for concern not the (allegedly rude) fingers being shown by the ladies.

Mike got it on the nail, you didn't uncle, you were ranting...
You just sang in chorus after someone else thought of a better argument..

By the way the index finger is next to the middle finger right?
Just how you can get cramps raising both in unison is beyond me...surely you are not that unfit

thanks everybody, including ketua kerani, for your comments and insights. To me all this safeguards are unnecessary if the EC from the beginning stayed independent as they should have. everybody have a good vacation and stay safe.I take this opportunity to wish all Chinese commentators Happy New Year and to all non-Chinese commentators, peace and unity in this our beautiful country.