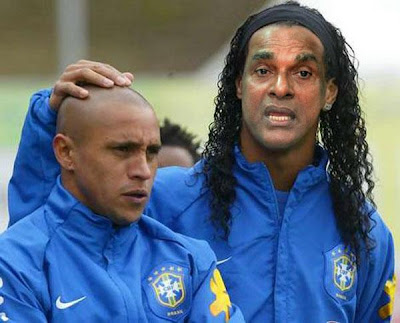 SAMY. according to Hantu, almost got bashed up by Hindraf supporters at a groundbreaking ceremony in Kampong Lindungan, off Old Klang road. If not for the cops who whisked him away, samy would have been pulp product. No matter how he brands himself these days, people see thru him . sam, take a bow and go ....... but of course you do not want to go....so don't blame us if.....
Posted by zorro at 1:50 AM

Samy can be hounded and all. At the end of the day, after this GE, BN will be returned to power with another healthy majority. This is Malaysia here la. We are not US, Australia or Taiwan.

Malaysians in general will moan and rant but just before the GE, they will take the usual goodies like donations to chinese schools, better drainage and paved roads, new street lights etc etc. Come voting day, they will vote BN again.

No point fighting a losing battle. This is Malaysia la. Wake up. Much better to do things which are more realistic like earning a living.

if this idiot can betray his people so openly

what is the chances of those in umno, mca and

if those poor indians can wake up to the fact

that they have to revolt against this scum,

what is the chances of the rest doing the same?

are they gonna mire themselves in

the GLORY OF CRAP - courtesy of bn

and get themselves a real good

anon10:16....thanks. However people like me prefer to be perceived as fighting a losing battle than to give up the fight even before the battle has been declared. better we be losers trying than not trying at all....it is negative people like you who pull down everything. take off your blinkers and maybe you may improve your periphery....I hope you dont need me to elucidate this much further so that you get a least a gist of what we are trying to do.

Zorro, my brother, I am sorry the battle was already lost decades ago.

I am not negative, just realistic. To continue fighting a battle when it was already lost ages ago is a waste of effort.

This is Malaysia, please be realistic. Take a stroll to 1Utama or Midvalley today and you will see many happy Malaysians happily shopping away. So, what battle are we talking about here???

And even if there are unhappy Malaysians now, the pre-election goodies by Ong Ka Ting i.e. donations to chinese schools and chinese chamber of commerce will swing the votes back.

This is Malaysia Boleh la.

We have another La Sallian taking up the fight.

All La Sallians in Klang, your brother will be in Klang soon to serve you. Lets cote him in.

The La Sallian spirit - against all odds.....

Yes, we keep fighting to the last drop....

Anon11:45
Brother, you still haven't got my drift. Anyway, to each is own; let's just do what we think is right, our own way. But do it for a better Malaysia. Peace and Unity brother.

anon11:55....all thru our classes the voice will resound Charles Santiago...yes I have been alerted but did not know that charles was a Lasallian. I have asked for his, edward lee's and MTUC president's campaign schedule for me to post on my blog....we need decent people to represent Malaysians. Huddle and Rally for a better Malaysia.Tks for the info and feedback.

The old priest lay dying in the hospital.
For years He had faithfully served the people of the nation's capital. He motioned for his nurse to come near.

"I would really like to see Khairy and Samy Velu before I die", whispered the priest.

"I'll see what I can do, Father" replied the nurse.

The nurse sent the request to them and waited for a response. Soon the word arrived. Khairy and Samy would be delighted to visit the priest.

As they went to the hospital, Khairy commented to Samy "I don't know why the old priest wants to see us, but it will certainly help our images."

Finally Samy spoke. "Father, of all the people you could have chosen, why did you choose us to be with you as you near the end?"

The old priest slowly replied "I have always tried to pattern my life after our Lord and Savior Jesus Christ."

The old priest continued..."He died between two lying thieves. I would like to do the same."

at a gathering in penang, a group of students gave this samy guy a hard time too, which made him walked out.
http://anilnetto.com/2008/02/13/samy-vellu-walks-out-in-a-huff-as-students-fail-to-humour-him/

remember when he was in PISA penang to officiate some dance event, the audience boo him or something like that.

it's so clear that people are so angry with him now and don't want him!! he ought to resign!!

and anyone else with the same mentality.

The main issue right now is not whether we are fighting a losing war or whether there's a battle going since everyone is still enjoying their shopping and current life as it is.

The main matter is
"What is WRONG will ALWAYS be WRONG"

"NOTHING RIGHT will EVER emerge from something which is so WRONG"

"EVEN if everything seems alright now, it will DEFINITELY be NOT in the FUTURE if nothing RIGHT is done NOW"

Therefore, we have no choice but to do the RIGHT thing and fight for our rights. If not for ourselves then for our future generations.

Of course, you may opt to migrate and leave which would require another kind of struggle financially, mentally, emotionally and other concerns which are not trivial and definitely not less than fighting the injustices in our own birth country.

The moral of the story is, if you don't stand up for what is RIGHT, then be prepared to bullied by evil greedy men WHENEVER and WHEREVER you are.

There are some who feel that, since the battle is already lost, there is no point in trying anymore.

History is full of events where those determined to bring about change fought against formidable odds. Sometimes, the victory may have looked small, may even have looked like a loss. But all that is required is one pivotal change that opens the floodgates.

Without change, things cannot become better. If you want things to become better, then you must work for change.

For now, our goal should be to deny the 2/3 majority in parliament.