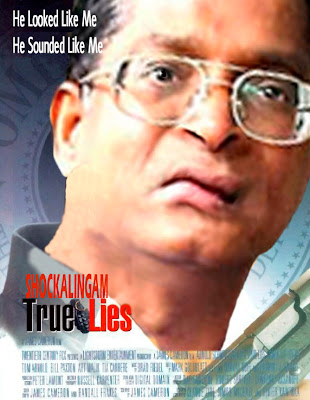 Samy, if you cannot read the writings on the wall then read these, both written on paper:

This first is from a reader who visits regularly and has his own blog. He prefers to be known as Old Fart.

Samy: Indians can count on MIC

Well, that is what Samy says. But why repeat this and others so frequently these days? Three days ago he was quoted as saying that Indians need to be politically represented in the corridors of power.

Well Samy, fact is we have been for 50 years and see where we are today.

The Indian diaspora that went elsewhere are not politically represented. They have done well for themselves including in some countries like and some African countries, literally controlling the economy.

Samy, just leave the Indians alone. Abandon them. Let them rise up above themselves and fend for themselves. They will and they can. V.K. Lingam has shown us the way. Despite you and the MIC, by staying out of MIC, he, a Malaysian Indian ruled the Malaysian judiciary for over a decade. 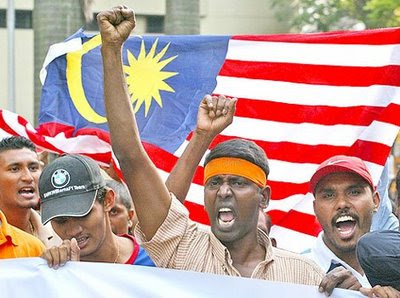 This second is an open letter to soon-to-be-out Minister of Works:

I hope this letter reaches you either in form or in message.
The purpose of me writing to you is to give you an advice from a Malaysian who spent a lot of time on the ground talking to people. Over the past month and past few functions you or your son attended, reports indicate that the crowd jeered and booed. If there is any strong signs of dislike this is probably the crudest way of saying goodbye.
Dato Seri, over the last 20 odd years your contributions to the Indian community is a lot. The problem is that people have short memory. It is easier to remember something bad than something good about a person. For this simple reason, all the good deeds that you have done are now being eaten up by hatred and anger. People seem to remember more about you helping yourself then the community. Some people say, that you are worth billions. I don't know and I reserve my judgment until I see concrete evidence to the fact.
This is rather sad. I believe if people were to sit down and think hard and find one good thing that you have done, they probably could find it. I for one remember you to bring a sense of order in the MIC. I remember MIC members use to throw chairs at meetings. Even the nation foremost cartoonist, drew a cartoon about this, some years ago. It is not easy to bring people of different believes to sit together and agree on common things. Nonetheless, through your strong arm tactics, you managed to do it. I suppose the need for unity was much more important that this means was considered necessary. Wherever I go, people keep saying that Samy has got a large group of gangsters under his pay roll. I don't know whether it is true or otherwise. I prefer to judge a person until I see the evidence. Right now there is no evidence to that effect. Some people would have used love and care to bring unity among people but this is probably an unsuitable method. I assume you must have
done a proper study to determine the best method to unite people.
Considering your role in this forthcoming 2008 General Election, the sentiment of the people in the recent past has not been felt or seen to be favourable. There seems to be a lot of anger being projected towards you. The time has come Dato Seri, to make a tough decision in life. You see the Indians command 7% of the votes in the country. Assuming 3.5% were to vote the other side, it would affect the performance of Barisan Nasional. So much so that it can cause UMNO or MCA to lose a stronghold. Well some people may argue that this might not happen but it is all about risk and the need to take it.
While you could probably win the Sg Siput seat, it is not guaranteed to be the same for others. In fact your winning can be translated into a loss for many others in the Barisan Nasional. You need to ask yourself a simple question i.e. is, if you are a party man? If you are indeed a party man, you will place the party higher than yourself. You would be willing to make sacrifices for the sake of the party.
I believe a wise move would be is, not to contest in the Polls due on and also decline nomination at the next MIC election. If you don't do that, you risk being blamed for the other BN component party losses because the Indian are obviously voting the opposition candidates. This is glaringly evident, in and through their expressions of their anger directed at you and not the other members of the Barisan Nasional component parties. If that were to happen, then you will lose face and people will remember Samy as the man who was kicked out of MIC rather than a man who united its members
So, Dato Seri Samy, I humbly request, on behalf of the BN members and that of the rest of the Malaysians that you DO NOT contest the next election. Do the right thing. As I said earlier, you can win your seat (by many means) but the same cannot be said about the other seats contested by the other BN component parties. The 7% Indians may just vote the other way.
I wish you all the best in any decision that you make. Thank you. (Nandri)
"Nambikai yodu"

OUR HINDRAF 5 REMAINS INCARCERATED AT THE PLEASURE OF THE PRIME MINISTER.

this is a small sacrifice


It is definitely worth it.

a bad sami is a reflection of a bad bn.

a bad bn is due to bad policies.


bad policies are common courtesy and denomination of bn.

the very pride of unmo

Wanted to say hi to you at SFX but you left right after it ended.

You made me laugh out loud!
"Please learn to listen!"

Hope to meet you another time soon :)

Khairy Jamaluddin DO NOT BULLSHIT, here is a real case for you and if you are a real OXFORD UNIVERSITY GRADUATE then you will know that Judge Zainon binti Mohd. Ali needs to be prosecuted for committing criminal offences.

I refer readers to my post on this fellow Khairy Jamaluddin, son in law of the Prime Minister and play-boy with a fleet of very expensive cars, please go to http://yap.chongyee.blogspot.com.

Dear Khairy Jamaluddin is all hot air, lots of empty talk before election and nothing but promises after the election. He has been put into the deputy leadership of UMNO Youth. Where else can his father in law “fast track” him into the front ranks of UMNO and eventually to succeed Ahmad Bedawi as Prime Minister ? I have observed many times that Malaysia is an oligarchy in the IRON GRIP of UMNO elite. The promises he has made so far can only exist in his mind alone and in fact cannot be realized. They are mere empty promises and are not to be taken seriously.

Let me draw this Khairy Jamaluddin’s attention to the ongoing ROYAL COMMISSION INTO JUDICIAL CORRUPTION ! What is Khairy Jamaluddin going to do to ADDRESS JUDICIAL CORRUPTION ? This is what solid and down to earth ISSUES that need to be addressed; and has he said anything about it ? Let me cite my wife’s CASE : ORIGINATING PETITION No.: D2-26-41 of 2001 in the HIGH COURT IN KL was struck out by the PRESIDING JUDGE ZAINON BINTI MOHD. ALI, who is now promoted to the court of Appeal. It is hilariously funny that judge Zainon binti Mohd. Ali was so IGNORANT OF THE LAW THAT SHE AWARDED TO THE RESPONDENTS WONG KEM CHEN, STEPHEN LIM CHENG BAN AND KWONG SEA YOON 2 directly OPPOSING ORDERS (a) for security for costs, which my wife paid in the sum of RM.60,000; therefore by this payment by my wife there is nothing else to be done except to go to court; but instead judge Zainon binti Mohd. Ali went on to ILLEGALLY AWARD TO THE NAMED RESPONDENTS A SECOND AND OPPOSING ORDER TO STRIKE OUT PETITION.

The ignorance of this judge Zainon binti Mohd. Ali is so comically profound THAT ALL HER ACTIONS ON THE BENCH IN HER ADJUDICATION OF MY WIFE’S PETITION WERE CRIMINAL. She committed the following criminal OFFENCES :

I had written countless letters to the Malaysian A.-G, Chief Judge of High Court of Malaya, copies to President & Secretary of Malaysian Bar Council and to this day I have not received any response. Here is a Judge of the Highest Court of Malaysia who does not KNOW THAT SHE WAS IN FACT COMMITTING SEVERAL CRIMINAL OFFENCES WHILE PERFORMING HER JUDICIAL DUTIES. I have invited the Malaysian A,G, and all those mentioned above to come to Australia to obtain my EXTRADITION FOR SEDITION so why have they failed to clear the name of Judge Zainon binti Mohd. Ali ? Why bother for the Malaysian Government to spend several millions of Ringgit to hold a bullshit Royal commission when criminal behaviour of Judge Zainon Binti Mohd. Ali is all there to READY FOR PROSECUTION.

What is this fellow Khairy Jamaluddin going to do about a REAL CASE and not one that is hot air. I invite the Malaysian Government to come to Australia to get my EXTRADITION.

What good did it do for them? What good could they do for us?

BN MP can only vote for UMNO not for Rakyat!

For those who wants the Makkal Sakti GE 2008 vids in the VCD format can download the image file and burn it. It can be found here gomenbolehland.blogspot.com

Make sure everyone you know watches it before 8 March!!