LEADERSHIP BY EXAMPLE? COMMON,BASIC COURTESY SAYS YOU BOTH NEED TO LET THE CHILD KNOW! 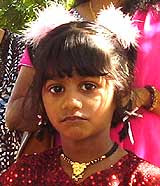 Five year old VWAISHHNNAVI, will be among some 200 children who want to make this years Valentine Day very special. She and her friends will be bearing red and yellow roses to give to the Prime Minister at Parliament on February 16. On January 22 she sent this letter (below) to the Prime Minister. 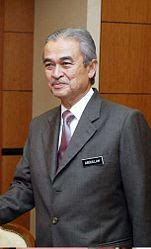 "Please wait for me at Parliament House to take my roses."

According to Malaysiakini the Prime (work with me, not for me; I have big ears) Minister has yet to reply:

Abdullah has yet to reply to a handwritten invitation from five-year-old Vwaishhnnavi, the only daughter of Hindraf chairperson P Waythamoorthy, who had submitted it at the PM’s Department on Jan 22. He is in self-imposed exile in to build support for Hindraf’s cause.

Yet another appeal has been sent to the premier to keep a Valentine’s date with children on Saturday....but will the response be yet more silence? Supporters of the Hindu Rights Action Force (Hindraf) hope not.

Why is it that important that the children want the Prime Minister to receive them?

“Please protect me and others coming to Parliament from the brutal attack of police who may use tear gas and chemical (-laced) water. Mr PM, I am coming because I want to give you beautiful flowers... You must wait for me at Parliament to take my roses.”

"He is our leader. He should meet us to listen to what we have to say, as he is serving us (citizens). The dialogue should be directly between us and him, (with) no middlemen (involved)."

Teacher K Krishnan, 58, said with a smile: "This is a peaceful gesture shown by courageous children and we do hope that (Abdullah) will attend. 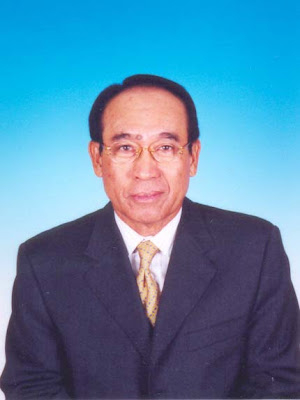 On Feb 6, Vwaishhnnavi submitted another letter at the Human Rights Commission of , asking its chairperson Abu Talib Othman to attend the event as ‘insurance’ to protect the group from possible police action and to uphold their human rights.

Two postings earlier I challenged all the commissioners to lead the group of children because Vwaishhnnavi appealed for their protection.

Has the all-important POLICE been informed. No wrong question! HAS THE POLICE GIVEN PERMIT FOR THIS GATHERING OF CHILDREN BEARING ROSES FOR THE PRIME MINISTER?

Asked what they had in mind if denied a police permit to assemble outside Parliament, a representative said the peaceful gathering would go on even if a permit is not issued. An application will be submitted to the police.

“We will apply for the permit, (so) grant us the permit. We will abide by all the laws and regulations. We’ll never break any laws. We’re only worried that they (the police) will set a bad example."

To a suggestion that the group would be using children to further its goals, he said the gathering on Feb 16 is to educate the younger generation and impress on them the need to struggle for their rights.

“We are taking them (along) with the consent of their parents. We are doing this for their future,” he said.

PEOPLE, IF THE COMMISSIONERS WILL NOT ACCOMPANY THE CHILDREN, I WILL....I MAY NOT BE THE BEST PROTECTOR THE CHILDREN WILL HAVE UNLESS YOU PEOPLE JOIN US. OK? LETS DO IT. LETS TELL THE CHILDREN THAT WE CARE.

THE KIDS DON'T CARE WHO WE ARE,

OR HOW MUCH WE KNOW

HOW MUCH WE CARE!

Zorro, you and your other blogger friends certainly are not listening. Or you are just plain dumb and stupid. Which is it?

Has the Prime Minister not told you guys loud and clear that if you want his attention, you need to have at least 30,000 people demonstrate first, not scatter when his FRU guys shoot chemical water at you and throw back tear gas cannisters which the FRU guys shoot at you? Also you got to say some blatant lies which has to incur his wrath only because he gets very angry.

Now all that this 5 year old girl has done so far is sent a letter....and you are expecting him to respond!!

Well, I will tell you how he is going to respond. He is going to have his FRU fellas line the road and they are going to show this 5 year old girl how strong they are. They may even show her their shields and batons and their water trucks and their tear gas guns!

They expect the 5 year old is going to run!

The big question is, how they are going to now demonise this attempt of this 5 year old together with another 200 kids attempting to hand roses to the Prime Minister.

I think he is going to be "Leaving on His Jet Plane" before that as as I write this, for no reason at all, I have Glen Campbell humming in my head!

Old Fart....sure he may be jetting somewhere....but are we allowed to make a stand. You think little Vwaishhnnavi will run at the sight of the FRU? You might....(but you wont be there I guess, we wont and not even the girl, I am sure.

I dont get you....that part :"how they are going to now demonise this attempt of this 5 year old together with another 200 kids attempting to hand roses to the Prime Minister."

call us plain dumb or stupid...it doesn't bother us one bit what you think.

Let me share something with you...your fart used to have more substance before...what happened?
Carry on farting....healthy to break wind, from the rear than from the front. cheers maaaaannnnnnn.

Hi ya Zorro...I was hoping you will see the cynicism in what I wrote la...when I said you bloggers..that also includes me ...because, obviously, ranting on about hoping for a certain response is becoming all so tired. So you see, I too must be dumb and stupid...yet we go on.

On the demonising...well you see so far Hindraf and the blogging community has painted this valentine rose attempt to be nothing but....al so innocent and nice.

The Hindraf 5 according to MSM and the PM are terrorists, hence their incarceration.

Palestinian intifida used children. Soweto uprising used children as well. But Malaysian government will make sure, and they have to, that this children and roses thing is demonised as something organised by terrorits maybe or what ever...But surely they got to make it look bad!

Alternatively they could use this to make it look like as if it is a racial thing...so as to get the Malays to rally around UMNO. But, demonise, they surely will and they surely have to.

Old fart, I beg forgiveness for missing the "cynicism" behind your post. Honestly I did. Tell me I am forgiven, please!

Hey zorro,
Yes, we'll huddle it out this sat!!
Cheers, will see ya there, the FRU, Water Cannons and all..
Will be funny, cause in US, UK they will be allowed to proceed.
However in KL, it will be a different story lah...

Zorro, you're forgiven when you let me buy you a pint of beer!