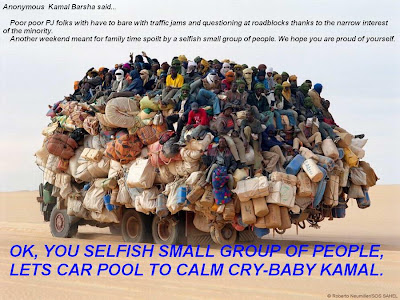 KAMAL, CLICK TO ENLARGE PIC FOR YOUR VIEWING PLEASURE.

PEOPLE I DO NOT HAVE A PIC OF KAMAL.
EITHER HE IS FACELESS
OR HE LIKES TO SHOOT
AND HIDE.

DANG, I AM HAVING FUN.
LETS PARTY AT CIVIC CENTRE.
Posted by zorro at 5:14 PM

azzholes are everywhere. and sometimes, they are more disgusting than the FRU...

Just returned home from candlelight vigil. It's like the previous assembly minus our 'police friends' but the assembly was rather 'mild', might be considered anti-climax for those who expected exciting actions like last week!.

No untoward incidents and the gathering dispersed after singing the Negara ku.

What do the rakyat really want? Is it just to abolish the ISA?

I think what the rakyat want is a true democracy in Bolehland, ie. separation of powers and check and balances, the tenure of pm is limited to two terms and local government must be elected by local rakyat!

Now that rpk has been freed, the goals now should not confine to the releasing of Hindraf 5 but must also include the other agenda.

It's the other ultimate agendas that the rakyat must also focus on!

Just like this New Era principal Dr. Kua Kia Song (Kua literally means dead in Cantonese) aka pj traitor who wittingly filled his nomination form wrongly so that he was disqualified from contesting the Parliamentary seat in Petaling Jaya.

Wow! This pj traitor had really got the guts selling the backsides of his pj voters to the MCA dogs.

How dare this pj traitor has the guts in selling the pj voters' backsides to the MCA dogs considering this is the homes of Zorro, his personal party Dap headquarter and many learned scholars?

This pj traitor is just a stupid nincompoop in carrying out such a suicidal decision in making such a foolish deal.

The MCA dogs closed down the Chinese Damansara Primary School and the pj voters really paid big times for the crime this pj traitor committed.

Paradoxically, this pj traitor has no shame or feeling remorse for this greed in resulting the closure of the Damansara school in Petaling Jaya and now has the cheek mimicking the sos damansara school and applying to New Era college.

Wow! This pj traitor just doesn't know hoe high is the sky or how deep is the sea?

Dose he fear god? What kind of devil is he?

Are the pj voters incompetent or just oblivious to the crime he committed without taking the necessary reaction?

Dey! pj traitor, you picked the wrong constituency for your evil machination la.

Now this pj traitor wants to do a deja vu in New Era college in Kajang.

The endemic Chinese has had enough with you. Stop your evil machination for we know what you are up to.

Now we have dictatorial rule of Bolehland by the Bn dictators in all departments of Bolehland- laterally and vertically.

Do we want a system in New Era college similar to the dictatorial system in Bolehland?

Where is the check and balances and separation of powers in Bolehland?

This pj traitor is just a nuisance to mankind! Ditto the Bn putras.

The Bn putras and pj traitor must be booted out the sooner the better for the betterment of all rakyat in Bolehland and New Era College.

Yes! We want to abolish ISA, the release of Hindraf 5 unconditionary and we want the restoration of democracy in Bolehland by bringing back the systems of check and balnces, separation of powers, election of local councilors and the tenure of pm being limited to two terms.

Then it's only worth living on this wonderful planet of ours.

I salute you, Zorro unmasked! You are an inspiring and upright pillar.

Who's the SELLFISH one when:
you're only thinking about yourself going to midvalley having a nice dinner

and yet at the same time, this "minority group" are fighthing for the innocent people being ISA-ed and deterred from being with their family?

Look into the mirror. (and into the dictionary too for the meaning of "sellfish")

P.S. Any idea who this "Camel Basher" really is?

I was there there too with my family members at the vigil last nite ! We were there to make a point that we want the ISA to be abolished...

Great to see all the great Malaysians who are at the forefront of democracy movement !! Promotion of democracy may not be all the time sexy or exciting work..

pJ voter.. what are you ranting about Kua Kia Soong being a traitor ??

Dr Kua was disqualified by the UMNO/MCA forces who controlled the election machinery...

As for new Era College, Dr Kua has the backing of the parents, the students and the teaching staff to continue as the principal of New Era College. Dr Kua represents the progressive forces in Chinese education movement !

Whereas, Yap Sin Tian the chairman of DongZhong. who sacked Dr Kua... has a fake PhD degree he bought from some god knows where place ... What kind of integrity has he got to lead the Chinese education movement ??

Yap is backed by the conservative boards of directors of Chinese schools many of them are either; dye in the wool MCA agents or representatives of feudal forces.

For the record… Dr Kua was out campaigning for Pakatan candidates during the March 8 General Election… I was there watching Dr Kua pitching for Eli Wong at Sri Damansara….

Whereas the fake Dr Yap and Dong Zhong decided to take a neutral stand for the GE … How can any decent person or organisation sits on the fence when the country is being raped by these BN goons !! ??

Please find out a bit more before you shoot from the hip... suggest your read the Chinese version of Malaysiakini or Merdeka Review online to get a better picture of things.

Zorro.. sorry for digressing... but I just have to put the record straight... Thanks... great to see you from a distance... you're an old tough nut alright !! Cheers from your fellow hometown mate...

This Kamal Barsha aka the Killer in some other blogs is another sucker who kneels before the mamak and semi value for his daily drink and meals.

The day he opens his eyes and sees their true colours and speaks about it, he would be either C4ed or put in Kamunting by the polis raja di Malaysia.

He is another of the mutts you see wherever UMNOputras congregate so as to pick up the scraps from their table.

a toong sir, you from Taiping too !?

I was back in Taiping over the Hari Raya period and tried visiting RPK at Kamunting with my friends but was denied entry. Nevertheless we left 3 cards for RPK with the police .. I wonder if RPK received our cards..

So you from Taiping too ? Reveal lah you name ! For all you know we may have fought outside KEVII school gate before !! He he !! But of course we only fight BN goons now !!!

me, a georgie of 1964 la! NO, never fought with KE fler but fren with many of them to maxwell, camped at austin,niteclub, lakesgarden, casual market : char koay tew, leong-char herb ....oh,sweet memories but now in ipoh !! (chin)