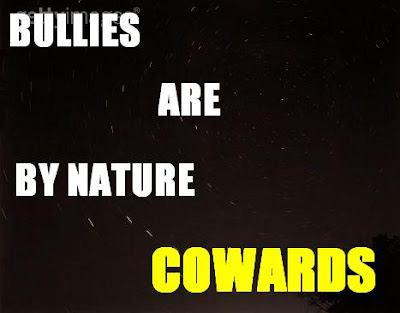 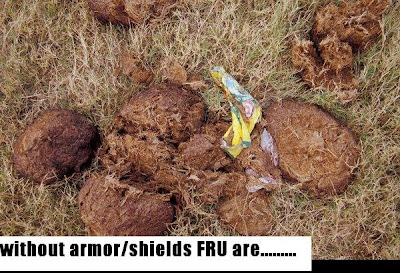 These minions who without their professional gear are nothing but cowards, yellow bellies who hide behind officialdom of the kind being evolved by the infamous botak.

He and his henchmen in the police farce is only good for harassing, intimidating and arresting people at peaceful rallies organized to open the eyes of the rakyat to the corruption and abuse of power prevalent in the BN government.

Until and unless the high ranking police officers give up their subservient and slave mentality to the corrupted powers of the day, the future of the country is to say the least, BLEAK.

Dedicated police officers who yearn for the force to be respected and held in high esteem should promote and fecilitate the peaceful rallies by doing their duty in providing unfettered access to the rakyat.

The thuggish mentality of the blueboys and their officers is a disgrace to the force.

They are quick to attack innocent unarmed citizens with batons, water-cannons and brutish behaviour.

They lack the moral courage to stand and act along with the rakyat who want justice to be done and seen to be upheld.

Stop prostituting to the higherups who are power crazy as the botak.

Be counted as men/women of intergrity and as the impartial guardians of law and order.

how many of you guys were arrested last night el zorro ?

The only way to handle FRU is to be confrontational. They are just another human behind the shield and coward like you say.

So, dId you gUys have a fun time last night mr.zorro ? i really envy you lah mr.zorro !

THE POLICE & THEIR BRUTALITY AGAINST PEACEFUL CITIZENS IN A NEW ERA OF UMNO BOTAK & NAJIS FIT FOR THE SEWERS ONLY.

WHY Razak Baginda, the fall guy, with no further obstacles or hindrances in sight for Najis in his ascending to the Top Power, has now been released??? The real murderers whose identities are obvious but are still at large, with RPK detained under ISA but just released and PI Balasundram exiled overseas there are no other major obstacles and hindrances to Najis’ ascendancy to the pinnacle of his power come March 2009. This is only obvious that UMNO has now the final say in justice with their man Zaki as the Chief Justice. This is the obvious Justice of Malaysia, the laughing stock of the whole world, Malaysia should be boycotted by the world communities for their greatest injustices towards human rights and common normal justices. THIS IS MALAYSIA’S MALAY SUPREMACY AT ALL COSTS BUT GOING DOWN THE SEWERS WITH NARJIS, THE NEW PRIME MINISTER IN WAITING AFTER THE 51ST YEAR OF INDEPENDENCE.

The 14 Characteristics of Fascism:
How many of the 14 points below do you recognise in the current BN government?
http://iwfrpk.blogspot.com/2008/11/fascism-in-malaysia.html

The Police, BN Government, Nashit and Shit Hamid are all good for nothing pieces of shit.

They should burn in hell.... the stupid fucks.

Does anyone knows what happened to that Malay guy who was not out on bail? I heard he has a criminal record and that why the cop retained him. He was one of those helpers who directed us to MPPJ from Amcorp 'cause we were late. He is wearing the Bersih T-shirt and was very helpful in guiding us. I feel there is more to it. I heard the cops are afraid of the Bersih group and wanting to clampdown on their activity.

Anon11:02am, according to lawyer Ashok who took his case, this guy was on police records for some offence. That is as much as I am told by Ashok yesterday noon at the PJ Sessions court.

Yes Yes..they are all yellow bellied pieces of shit..etc,etc,etc. I have been reading alot of blogs particularly the comments here, MT and every where. Lots of ranting, cursing and exclamations of enough is enough. I fully agree enough is enough. But what then??? It is so glaring that the other side doesn't care two hoots and are blatant in their action and attitude. All we can do is rant??
I think this is a foregone conclusion. We can only curse and swear and rant and hold candles and get chased. Nothing is going to change. For the next 4 years, the country will be plundered and they are not going to care what's left nor bothered if they get re-elected or not. They will have in their control all the wealth to enjoy till eternity while all we can do is rant and continue to slave for them. You think we can really wait till the next GE for the change?