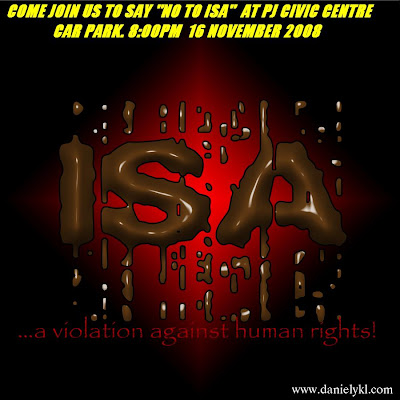 Thanks so much for your support and hearts of compassion at this very challenging moment in my life.

The smses, calls and messages coming me gave me the strength to go on when I thought I would not make it.

But because of you guys, I made it.

When we are weak, then only do we know the strength that lies within, that soars to lift us awy from the fears and dogma that beset us and hold us down.

Thanks again and blessings to you both and other friends/blogreaders....

Thanks for all the help you gave me even from way down south...for the phone calls to Haris and Jeff Ooi...and for calling up to see if I am ok...

By the way :), we did meet at the PJ vigil....I came up to you and spoke to ou briefly and I still remember you were wearing a black T-shirt and beige colored pants :).

Thanks again and God bless you and yours!

Only a truly beautiful soul whiose conscience has been fully awakened could write that there's no time for IF's at this point in M'sia's political scene.

I wish I could have been ther to offer moral and physical support.

Zorro, if she needs monetary support to fight this bullying and fascist state, let's chip in. Individually and Collectively, it will not burden us!!
http://donplaypuks.blogspot.com

I am shocked to hear that Paula aka masterwordsmith has been arrested by the police. She's just a conscientious objector to the ISA and, if you read her blog posts, you wouldn't be able to find anyone more reasonable than her. This episode of police action is a wrong, wrong move.

paula was released at about 1.00am. many of us (the organisers and a few others non organisers) were at the police station waiting for her from the time she was arrested (9.30). we do know of her arrest when she was bundled in the police car. we called liew chin toong and he was there with paula until her release. paula called rhina bhar, the lawyer.

we are meeting tonight to have a post-mortem.

Paula, we love you. Paula, we will fight for you. Paula, we will stand up for you. Paula, thanks for pricking our conscience. Paula, thanks for reminding apathetic Malaysians that democracy is under threat. That we are living under a fascist state. Heinrich Himmler, the dreaded Gestapo chief in Nazi Germany, died in the smouldering ruins of a shamed nation 60 years ago. But today, we have another Himmler in the form of a botak called Heinrich Syed Hamid, the most despicable character in Malaysian history.

Using section 143 against " A Song of Freedom" ? Legally unsound !

'Love, Hope & Solidarity ' is the spirit and message expressed peacefully.

I am with you all in Spirit as I pray.

Let's continue to Fast and Pray for Wisdom, Peace and Tranquility to prevail.

Let's continue to sing ' A Song of Freedom' and to 'candlelight vigil' to " RELEASE all ISA detainees & ABOLISH ISA NOW!".

Paula was out at about 1.00am just now, welcomed by her husand and a hord of supporters and media. She thanks everyone for support while recounted her encounter with the Investigation Officer. She looks alright and could still joke around-not bad for a 1st timer.

She was charged under section 143-for illegal assembly and associating with illegal organisation. She was given police bail and required to return to Police station on Nov 28th.

Let's keep our spirit high-the gathering by about 400-500 people proved that Penang people had not been cowed by the PJ mass arrests and police brutality! Only the police had to arrest a women to prove their `garang' nature!

Bernard, thanks for your support & help. I truly admire Paula for going ahead despite her earlier anxieties. I think it's worse to be arrested on your own than as part of a large group! All those trapped in their own reptilian mind (might is right politics) are so afraid they will be left far behind now that the tsunami of higher consciousness is upon us... well, all fears are self-fulfilling. The moment those in fear replace that emotion with something positive like LOVE FOR HUMANITY, LOVE FOR PEACE, LOVE FOR ALL LIFE... then the fear begins to lose its deadly grip... and therein lies the key to our FREEDOM!

A pox upon all would-be dictators!

Poor poor PJ folks with have to bare with traffic jams and questioning at roadblocks thanks to the narrow interest of the minority.
Another weekend meant for family time spoilt by a selfish small group of people. We hope you are proud of yourself. F

ight for Malaysia konon..how come I dont see the majority ethnic race that dominates the electoriate at this vigils? where the malays?

Dont keep pushing the silent majority to the corner. Once cornered, the mild mannered folks who have been tolerating you all may not take this crap much longer

Paula dear, be strong ! though we are strangers, i 've prayed to my lord JESUS to help u & BLESS u & family ! be STRONG bcos you got a FRIEND !!

zorro, her blog is being blocked la !!

Anon2:29pm....I just went into her blog. Don't be an alarmist. If you cant get in the first time, try and try again. We call that perseverance.

Kamal, I continued to post your comments although I have the where-with-all to reject your comments. I allowed your comments because I wanted my readers to know that there exists people like him. You would have realised that not a single reader agreed with your ideas.

I am replying to you today because you have brought in the racial card. I detest this. When you cannot win any more, typical of your type, you throw in race. Dont question why the majority race dont turn up for the vigils. We never force people to come to these vigils. We welcome anyone and we never lament about racial composition of the vigils. Kamal, this may be the last time I will entertain your comments. Kamal, I know three Kamal Barsha....they are genuine people...much loved by me and their friends. I know that you are not one of them, unless you go by a this name to usurp the genuine Kamal Barshas.

You say that the poor PJ folk will have to bear with the traffic jams. For 4 sundays, there never was any jams until they blocked all the roads to the venue. Oh i forgot, Basha, WE put up all the road blocks. And where were you? In the stray dogs pound? No jams there I bet....have fun in the pound smell each others u-know-what. Sorry for being rude. You brought this on yourself.