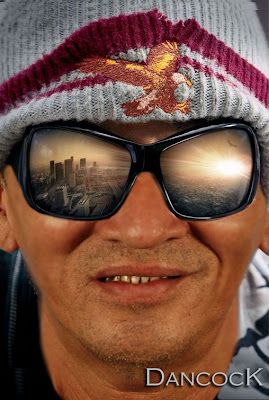 I am featuring DanielYKL because of his tireless campaign to Abolish the ISA. He wites once in a while but his posters are impactful, it hits you between the eyes and you sit up and think about his creation. Let's read what Dan has to say about himself, but allow me to just say this: He epitomises what Napoleon Bonaparte said: The word IMPOSSIBLE can only be found in the dictionary of fools.

HOW AND WHY I STARTED BLOGGING

When I was in the hospital right after my laryngectomy surgery (I had cancer of the throat), a good friend, Teh suggested that I should start a blog as a mean of communication since I am not able to talk due to the surgery. He said he will set up the blog for me and asked me to suggest a name for blog. The first name that came to my mind was DYKL but then the name has been taken. So I settled for DanielYKL, it sounds pretty cool anyway. So with that www.danielykl.com was born.

I have no idea how and what blogging is all about. I don’t even know how to post up my articles. So for the first couple of weeks I have to depend on my friend to do the posting. He was very patient with me, taught step by step on how to blog and manage my blog. I was never a computer savvy. I just know how to do the simple stuff on my notebook but of the blog I have to force myself to learn and experience through trials and errors about blogging. Now after 14 months I think I am getting the feel of it.

I started writing about myself and about the progress of the post-surgery. And I have plenty of time to do that, as I spent about a month at home recovering from that 10-hour surgery.Then I realized that after a while, people or friends are not interested to read about you. They get tired reading the same old thing about how I have recovered and my progressed. And not only that, I ran out of topics to write, hehe!!!

So I started to learn from other bloggers on how to pick up topics and make the blog interesting and informative - (I hope I have achieved that, but if I have not, be patient with me.) I then started to add photos and pictures along with the articles. Now the blog looks more colourful and attractive. Then I saw the Mob’s Crib’s blog. In the blog he did a lot of photoshop stuff from movie titles and others - I said to myself, ”that I should do.” So I got a book on Photoshop and started learning the tricks. Well, not that I have mastered it but then there has been some improvement and it gets the work done.

But the real motivation and challenge came just a few months before the 12th General Elections. As I read through the press and blogs, especially from Malaysia Today, Susan Loone, Malaysiakini, etc… just to name a few, I find that there are inconsistency and flaws in some of the issues made by the politicians and the government. So I thought, hmmm!!!, political blogging could be interesting and it will never run out of issues. So that started blogging about political issues. Not from someone who studied Political Science or with any politcal skill but from a view of ’an ordinary man on the street.’

And of course I write other stuff too, whatever that I think is worth writing. Anyway, I realized that blogging is very ‘addictive’ - once you start you can’t stop. Now since I am unable to talk, my blog has been my voice. It’s a place for me to voice my thoughts, opinion, views, expressions, inspiration, and belief. And sometimes my frustration, exasperation, and disappointments. I hope this blog has and will serve it’s purpose. 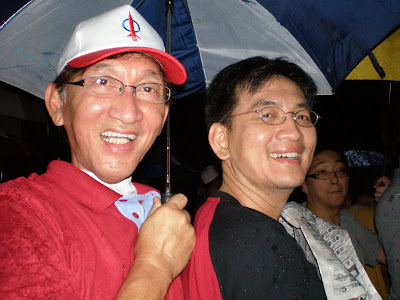 Daniel & Sifu Teh
I recently asked Daniel to design a logo for our bloggers' efforts against the ISA.
Below is the result.
If you believe in this effort, please put this up on your sidebar. 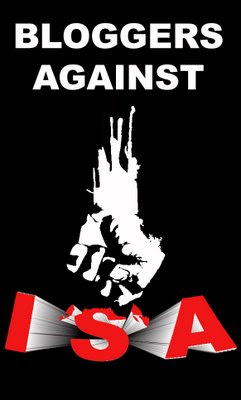 Daniel is on my blogroll as Daniel Dares.
Visit him HERE to see his Anti-ISA campaign.
Blogroll him....it is worth it.
Posted by zorro at 4:10 PM

Dan, what a touching story. I cried after reading your piece. I admire you. Your determination, fortitude in the face of personal tragedy is an inspiration to us all. Keep up the struggle against Umno lies, treachery, racism, bigotry.

There are five blogs which appear on my browser each time I log on: MT, Zorro, Daniel, MagickRiver and Lim KS. I have a lot of respect for your guts, your passion, your wit and your love for his nation. Daniel and I are also exchanging emails and sometimes photos for our work. Just a small correction, the Bloggers Against ISA logo was my creation.

Thanks for putting me in your Friday Guest Blogger. It's truly an honour. I am humbled.

Anyway, I just wish to clarify that you have mistaken me as the designer for that poster. It was done by someone else. Can't take the credit for a beautiful piece of graphic work by someone else.

Thanks again for featuring me.

BE ON COURSE FOR CAUSE

JACKSON MINUS ONE
And They Called it PUPPY LOVE, so BEAT IT !!!


LONDON: Pop singer Michael Jackson has converted to Islam and changed his name to Mikaeel.

The 50-year-old star, pledged his allegiance to the Koran in a ceremony at a friend's mansion in Los Angeles, the Sun reported.

Jackson sat on the floor wearing a tiny hat after an Imam was summoned to officiate -- days before the singer is due to appear at London's High Court where he is being sued by an Arab Sheik, the paper said.

The star decided to adopt the new religion while he was recording a song at the home of his friend where a Jehovah's witness was brought up to help him through the ceremony.

Apparently the star of hits like 'the Way You Make Me Feel-was convinced by his producer and songwriter friends David Wharnsby and Phillip Bubal.

"They began talking to him about their beliefs, and how they thought they had become better people after they converted. Michael soon began warming to the idea.

"An Imam was summoned from the mosque and Michael went through the shahada, which is the Muslim declaration of belief," the source revealed.

Mikaeel is the name of one of Allah's angels. "Jacko rejected an alternative name, Mustafa meaning "the chosen one", the source added.

The singer, who rarely ventures out without a mask, is due to give evidence on Monday in a 4.7 million pound lawsuit brought by Prince Abdulla Al-Khalif of Bahrain for defaulting on an exclusive recording contract.

Thank you for sharing a wonderful Malaysian with the readers of your blog.

He is truly deserving of a standing ovation!

Ayoo, samseng....yes it was you of course....I asked you to do it and at that time you had some other assignment but promised that you would deliver....and you did asap. Thanks samseng.
People it was Bodohland that created that BLOGGERS AGAINST ISA logo that if you believe in its message you need to put it on your sidebar.

Sam, how do I redeem myself for such carelessness.

I have known Daniel from the 1980s when we used to jam together at a cafe in Beach Street :).

Then by a twist of fate, I taught his Leon who recently got married.

Suffice to say that Daniel is a man with a big heart, multiple talents and sincerity that can be seen not just in his words but also through his eyes.

Those of us who know him are indeed blessed.

Thanks for featuring him, Uncle Bernard.