IPOH, WE ARE COMING! 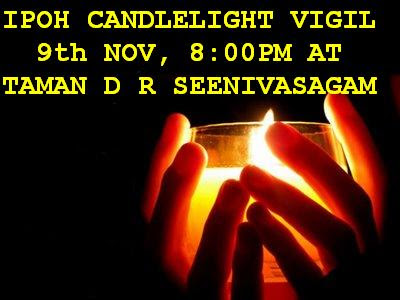 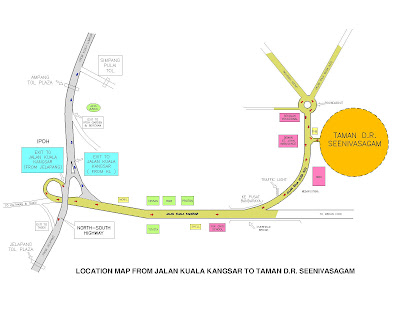 The time and venue has been confirmed as shown in the blog and there will be no changes on it.

wish i could be there!

In spirit, sir, in spirit.

Zorro, kindly reconfirmed the dates because in Malaysia today its announcement is 7th Fri, thats tomorrow? or is it on the 9th?.
Pls look into it ASAP.

Eva....we will accept your spirit amongst us. Good to hear from u.

Hi Mr Zorro
Wish to be there but me in dubai
http://1426.blogspot.com/2008/11/kalau-obama-itu-bapaknya-melayu.html

Wow, someone just sms from Ozzie land, supporter will be with us in spirit! That's most encouraging indeed. Ipohites/Perakians let's fill up Taman DR!
We will try to break our Ipoh's previous record.

Candlelight Vigil for Teresa Kok in Sept, an imprompto decision at lunchtime, via sms and within 6 hours attracted 900! See you there folks rain or no rain. Do please bring along an umbrella though.

TAKE a walk around Ipoh old town and you will see that the place has retained much of its colonial charm in the many old buildings. There is architectural evidence that the British and the Japanese once occupied old Malaya and this part of the State capital of Perak. The influences of the Malays, Indians and Chinese who helped develop the city, are also obvious.

Ipoh was said to have been founded by a Malay chief, Tok Keluang, son of Tok Sabang, the chief of Upper Perak who was killed for going against Sultan Mudzaffar Shah, the first Sultan of Perak.

When his father died, Tok Keluang fled downstream along the Perak River and founded a new settlement in 1528, which was to become old Ipoh.

A walk down memory lane should start at the Railway Station, nicknamed Ipoh Taj Mahal for its intricate Moorish design, not unlike India’s famous monument of love.

Built 93 years ago in 1915, the station was the second concrete building in the town. The rail tracks were laid at the height of the tin boom when the only means of transport was by boat and it took three days to travel from Ipoh to Kuala Kangsar, a distance of 54.5km.

Many heritage buildings in Ipoh are Victorian in style and can be found in many parts of the old town, especially on the west bank of Sungai Kinta. The shade they provide makes walking along the narrow streets a cool and pleasant experience.

Stop a while at Jalan Tun Sambanthan, also known as the Street of Lawyers as once, lawyers were always going in and out of their offices here to go to the High and Lower Courts nearby.

Today, many offices have been turned into kopitiams and cafes. Fatt Kee Coffee Shop at No 7, for instance, used to be the legal office of S.P. Seenivasagam, the first municipal president of Ipoh in 1962, and his younger brother D.R. Seenivasagam (a lawyer, MP and founder and president of the People’s Progressive Party).

Across the street is Ipoh Padang, with old casuarina trees planted in 1898 and the Royal Ipoh Club (1895), where the British used to come to relax and drink in the colonial days.

Jalan Tun Sambanthan is divided into two sections — Jalan Sultan Yussuff and Hak Chan Kai (Cantonese for Street of Hotels). There used to be eight cheap hotels in this area catering to early traders but today, Kam Kong Hotel stands alone as the last “heritage hotel” while the others have been vacated or turned into other businesses.

Next stop is the Birch Clock Tower, after the Town Hall. It was built in memory of J.W.W. Birch, the first British resident of Perak who was killed by local chieftain Datuk Maharaja Lela. Murals on the four walls depict the various facets of civilisation in the old days.

Another impressive building worth a visit is the St Michael's Institution (SMI), built in 1912. During World War II, the Japanese kempeitai or secret police turned it into a torture den for prisoners, including the British.

Local heroine Sybil Karthigesu, who supplied medicine to the Malayan guerillas, was caught and tortured for two years here. She later received the George Medal from King George VI and had to undergo 10 operations to heal her broken bones.

Next to the school is the beautiful Indian Muslim Sheik Adam Mosque, built because of differences in opinion between Sheik Adam and the then Malay chieftain Datuk Panglima who built another mosque on the other side of the river.s

Nearby is the FMS Bar and Restaurant (1906) which houses antiques like old metal advertisement boards, gramophones and records. FMS stands for Federated Malay States.

The seedy side of old Ipoh is reflected in Hale Lane, Panglima Lane and Market Lane — known previously as First, Second and Third Concubine Lanes respectively.

Before the Japanese Occupation, the three lanes housed brothels, gaming houses and opium dens. It is believed that when an opium addict died, his corpse was simply thrown out the window into the road for municipality workers to cart away!

Today, the lanes are a quiet residential area, sometimes used by filmmakers to reconstruct historical scenes. Clothes are still washed and hung on wooden stilts seen across the lanes. It is an old “practice” still adopted by residents living near the lanes.

End your walkabout at the St. John’s Church (1910). During the colonial years, the first three pews were reserved for the British.

During the Occupation, the church was converted into a noodle-making factory and the original pews were chopped up for firewood. These were later replaced with pews of solid teak. The only original item left is a cross that was saved by a man who presented it to the British regiment.

Aha… It has been awhile since I last wrote about our Malaysian urban legends, isn’t it? :-)

All right folks, today I have something new for you. Today’s Malaysian urban legend has been around for years and it is quite well known among Malaysians especially to those who have spent their studying years in Malaysia.

As the nearest residential neighborhood to Polytechnic Ungku Omar, the neighborhood is obviously the most convenient place of stay for students who were not given the opportunity to stay in hostels. Yes, they had to rent rooms but most of the time they would rather rent the whole house and then share the accommodation with friends and colleagues. Residents of Taman Cempaka were quite happy with that in the first few years since it would give them the opportunity to make some easy money. Many moved out of their homes and then rented them out to students.

Alas as the years gone by, residents of Taman Cempaka realized that something bad has happened to their once peaceful neighborhood. PUO’s students (majority of them are Malaysian Malay (Melayu) Muslims) have brought something bad into their neighborhood. Social problems such as drugs and free-sex culture have become prevalent in their neighborhood. Some residents of Taman Cempaka just closed their eyes on such problems but many concerned Muslims who were worried about the safety and well-being of their children began to make some noises. They had raised and highlighted such problems to the administration of Polytechnic Ungku Omar with the hope that they would be able to do something about it. Unfortunately, there’s nothing much that they can do to help the residents of Taman Cempaka. :-(

To all residents of Taman Cempaka who are concerned with this prevailing problem, I would advise every one of you to contact the Perak Religious Department (Jabatan Agama Islam Perak) as soon as possible. Maybe both parties can work together and coordinate some kind of social monitoring or social policing mechanism to eradicate such social problems in the future. You folks have to do that fast before the whole problems become totally out of control!

okayyyy.....we shall be there!
take the opportunity to give Zorro a bear-hug, unmasked or otherwise.
And it's jackpot if get to hug Marina too !!
seeee y'all there!!!!

I'm an Ipohlite but currently studying in KL. Would have loved to join the vigil!

All the best ladies and gents and do remember to post pics!

would like to bear-hug RPK & wife
if they come to IPOH !!