THE BALLAD OF KENNY & ROSIE

YES, i had difficulty getting into MT even at 3.00am this morning. But the gods are kinder after my visit to Pete this afternoon at Kem Kamunting. I was fortunate to accompany Marina and her two girls, Su and Sara. Pete did not look as pale as two weeks ago. He is still wearing a back-harness but he was all smiles when he saw his three girls. I spoke to him thru the speaker-phone for less than two minutes because the three ladies had only 43 minutes between themselves. HE IS STILL STRONG despite having gone thru some three sessions of ugama-refresher courses.I told him about the on-going vigils and gave prominence to last nights first Seremban vigil. He said he hopes to join us in future vigils! Dang, how can you not like that type of attitude.

So what's this about the gods being kinder......am home now and was able to get into Malaysia Today at first click. However, I have had feedback that some are still finding it difficult to connect.
For these, I produce, from Mongolia, Mongolia.....the Ballad of Kenny & Rosie. 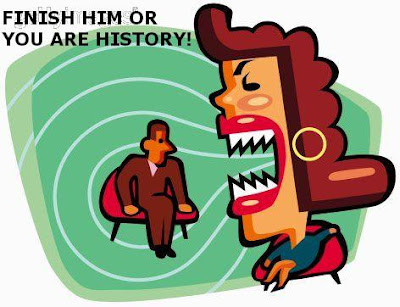 (A Sequel to Wanted Dead )

Rosie: No he cannot die yet…he dies the spell dies.

Kenny: But he knows too much!

Rosie: You too know too much..

Kenny: But you can trust me.

Rosie: Like how Clement trusted you, as his driver?

Rosie: I can be nastier….get gurujee back here in KL.

Kenny: His swami won’t allow him out of his sight.

Rosie: Do the clement on his swami.

Kenny: You are not serious?

Rosie: You think I do not know about clement. His son, where is he?

Kenny: Why bring up his son?

Rosie: He could be my ally!

Rosie: Stupid dropout you. For insurance of course.

Kenny: You don’t trust me?

Rosie: I don’t trust anybody. Not you. Not anybody.

Kenny: Hard to work with you this way.

Rosie: I am not asking you to work with me. You work for me, you shorty.

Kenny: Gurujee must be smuggled in.

Rosie: You are getting smart now.

Kenny: How dah to smuggle him in?

Rosie: I spoke too soon, bodoh.

Kenny: His swamy is watching him like a hawk.

Rosie: Do a clement on the hawk then. You want to revert back to driving?

Kenny: That is unkind.

Rosie: I am not in the business to be kind, worm.

Kenny: I will think of a way.

Rosie: Since when are you capable of thinking. Do it.

Kenny: You are insulting me.

Rosie: Which you prefer, being insulted or being C4ed?

Kenny: You hate me.

Rosie: You just realized that, dumbo.

Kenny: Now you are being personal.

Rosie: So what? You started this gurugee shit, didn’t you shithead?

Kenny: It was for your own good.

Rosie: So bring him back for your own good, cyclops.

Rosie: I am no princess. I am Queen, knave.

Kenny: I will try.

Kenny: When you finish with Gurugee, what then?

Rosie: Then as you say he knows too much, finish him.

Kenny: No I won’t. I want to remain clean.

Kenny: I can’t have anymore blood on my hands.

Rosie: What is another one?

Rosie: Then you are finished….you know too much, corpse.

Rosie: Don’t what me. And while you are at it, finish off that driver of yours too.

Kenny: I don’t know where he is.

Rosie: Remember they said: Deny the SD and we produce the proof.

Kenny: They are bluffing;

Kenny: But we cannot deny the SD.

Rosie: So finish off your driver.

Kenny: Another one to finish off?

Rosie: Yes, or you are finished. Past tense.

an MT readers says this:

Hey guys...if we put some shh and dook dook sounds to the above, we can have a new rap hit single, eh what?

Zorro,
This can't be fictitious. Seems to be so true to me.

But STOP all these fables and tales because it is not going to be a passport for a better nation.

If anyone has any substantial input with crystal clear evidence, please publish and tell the world.

If none, then stop making all these muddled quizes and street gossip. It only hurts us even more.

Having blasted a woman, a lady, a girl, mother and duaghter to bits and pieces is painful enough. Not being able to nail the murderers is worst a pain after two years.

Now stop all these rubbish, unsubstantiated 'opra' style juices fables. It only makes us all caring citizens look like suckers really.

Bring out the real truth and nail the scums. PLEASE.

Yes, anyone, RPK included, please bring out the truth to nail these blood suckers if they have concrete proof. Otherwise, let's keep low and work towards a regime change when the next GE comes around.