FREE, FREE AT LAST, AS BLOGGERS AGAINST ISA RECORDED THOSE MOMENTS. 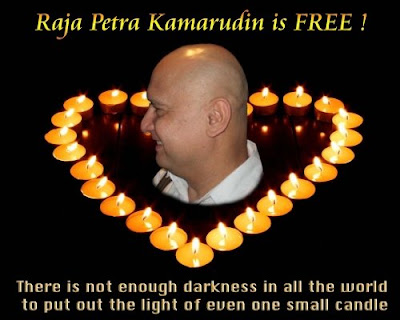 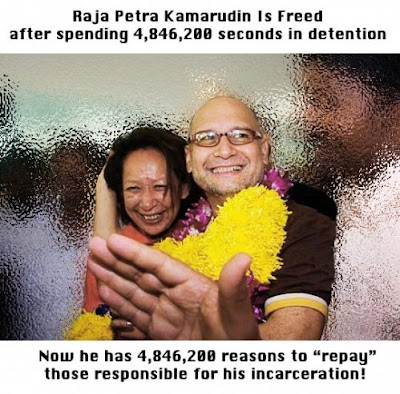 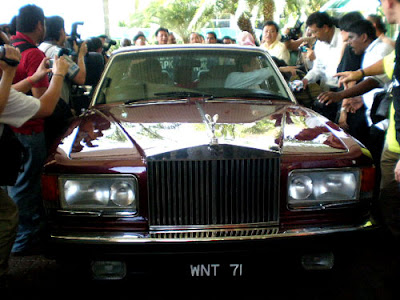 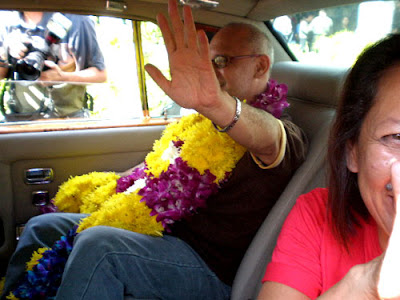 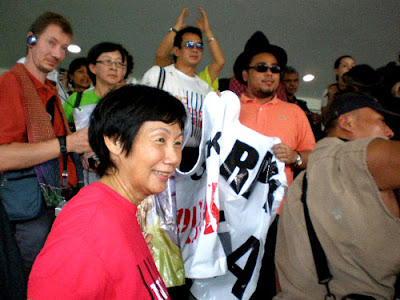 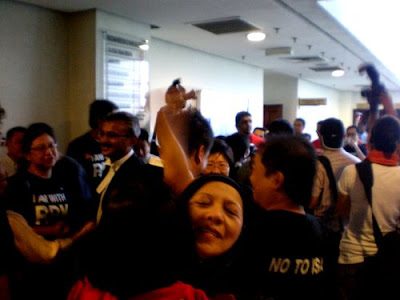 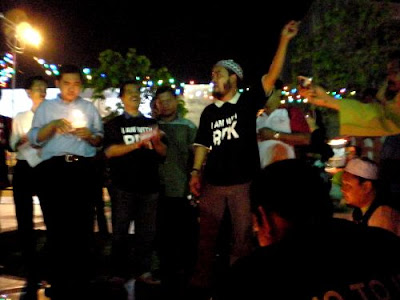 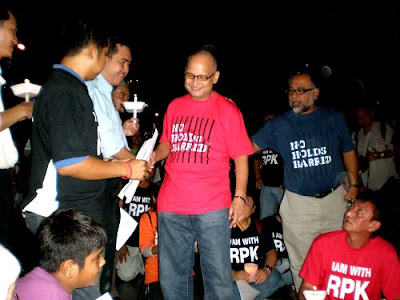 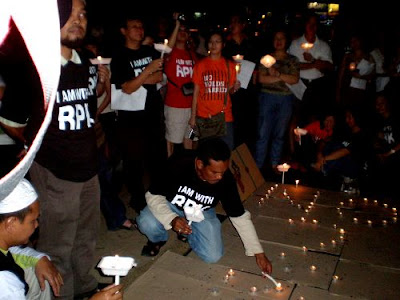 HOWEVER, BE AWARE THAT THE TEAM THAT TOOK AWAY 54 DAYS OF PETE'S LIFE IS ALIFE AND KICKING 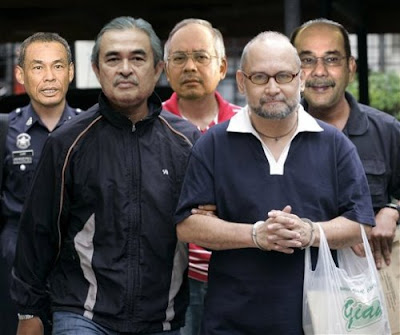 Yesterday was very tiring, but it worth it. very very happy to see him out, free finally. Will RPK go to PJ vigil? Anyway i'll be there tomorrow. see ya


THE LIGHT OF HOPE

Yes, Praise and thank God He is on our side and we hope that others will also be released...
The likelihood of sending RPK back is high...why? would the chosen one 'najib' sleep in peace with tis supposedly 'pest' out loose with the possibility of wreaking havoc to his March 09 ascension to the 'throne. see Raja Petra's Release: Justice won? www.jonathan66-my.blogspot.com

If this evil and corrupted regime
kept to clean and high moral governance, ISA will be the last resort to be enacted on the decent and innocent citizens. Obviously, it is not so, they have wrecked the victim's and his family lives, we shall not forget and have the evil doers punished.
Americans have made history, so can we. Let all races come together, form a caolition and throw this UMNO-BN regime out, once and for all!

Zor, you have done a wonderful job. God bless

It just went on to prove that all those who took part in ISA vigil was not in vain and the result is nothing but sweet.

Look at it this way. Dear Pete might still be there if not for these vigils......

Just look at the joys of those faces in the pics. It shows the dignity and esteem of the men in pursuing what they believe best for this Nation and her people. And the last pic tops em all. I thought the prominent person missing was the AG himself. Reserve 5 cells in Kamunting for these notorious personalities who had betrayed the Nation and her people. Do the readers realise -
1. one is recovering from a by-pass
2. one is counting his days as PM
3. one is linked to a murder
4. one is a jerk with his ISA
malsia1206

Bravo RPK, keep up the good work. Now we want Hindraf 5 and all ISA detainees to be released and abolished the ISA.

Rpk is our hero, but looking at this Dr. Kua Kia Song, sigh, what a contrast.

Couldn't fill a nomination form in the 1995 General Election, was booted out from New Era College, now instigating those innocent and gullible students going against the wishes of the rakyat.

This Kua Kia Song is a total disgrace to mankind when compared to our hero RPK.

i was so so happy when i heard the news of RPK releazse that i shouted out loud.PRAISE THE LORD.today sunday,i will definitely wear my yellow BERSIH t shirt.fyi,i happen to be the only one wearing the shirt which was bought by my daughter in kl last year 1011.kluangnites are still sleeping........

Jonathan said: "The likelihood of sending RPK back is high...why? would the chosen one 'najib' sleep in peace with tis supposedly 'pest' out loose with the possibility of wreaking havoc to his March 09 ascension to the 'throne."

My friend, first of all, you undermine your own authority by being so sloppy with your syntax and punctuation - clarity of thought comes with precise articulation and vice versa. And secondly, who the fuck wants a fearmonger in our midst? Fearmongers are energy parasites that feed off other people's joy and vitality and bring them down.
It's a sign of a negatively charged emotional body, a born-loser pessimist kiasi-kiasu wet blanket, one who goes up to you in the middle of a party celebrating your 1st prize lottery win and hisses: "Watch out for kidnappers!" Whether the illwill is intentional or merely due to mental indiscipline, such poisonous utterances are akin to bulk emails that warn you about HIV-infected needles embedded in cinema seats or human ghouls who spike your drink & then steal your vital organs for the Chinese transplant racket. THEY DO NOT SERVE ANY PURPOSE EXCEPT TO SPOIL OTHER PEOPLE'S JOY AND ERODE THEIR TRUST IN GOD & THE UNIVERSE!

If you must have your say, I suggest you put it these terms: "If those potatohead gestapomen in Umno attempt to put RPK back in Kamunting, we will find out where they live, drag them out of their houses in the middle of the night, tar and feather them, and chase them across Indonesia and into the cold embrace of Rosmah's twin sister, the Sea Witch of the South."

RPK and supporters should adopt this Tom Petty song as their anthem.

Hey baby, there aint no easy way out
Hey I will stand my ground
And I won't back down.

Well I know what's right, I got just one life
In a world that keeps on pushin me around
But I'll stand my ground and I won't back down

This photo is the BEST in a long time. I think it should be given better shelf life on the net. Suggest that all bloggers be able to post it on their site. If a rich, God-fearing honest towkay can sponsor it, little postcards should be printed and all citizens encouraged to flood Pos M'sia with tens of thousands of them.

RPK represents the man in the street.

The "Giant" plastic bag speaks volumes of the rakyat's cheap shopping paradise while the politicians may not even know where the next Giant is.

The handcuffs clearly tell the harsh truth of our the working rakyat's freedom of economy and politics and social justice has been taken away without grounds.

Really this is the greatest photo for a long time now. Let us not let slip between our eyes.

A lovely piece by J.D.Lovrenciear. It brings tears to the eyes looking at this picture and realising how vulnerable an ordinary rakyat can be when faced with injustice by the powers that be.

An excellent and entertaining blog, Bernard. Had a good laugh over the images!