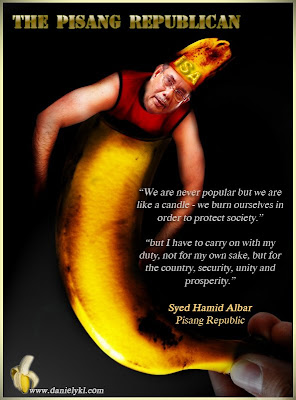 pls have one in ipoh, zor.

Zorro, have one in Subang Jaya where I stay. I can guarantee a turnout of hundreds of thousands. We will make stupid Umnoputras shiver.

Just an idea. Can we do a roll down the peninsula with these vigils. Started with Penang, then PJ. Next Seremban. JB next? Then we start all over from the North again. Any other towns that want to be in the roll call can join in. That way we could keep this thing alive and going.

any vigil in ipoh !!

Din Merican informed me that he has contacted his friends in Johor Baru
to initiate a vigil in JB.
People in JB, you can contact Suzie Yap at suzieyap@gmail.com
ok JBites....lets move.

Uncle Z, its important to have one in each major city. I am sure at the beginning only handful will turn up, but these things will take a snowballing effect. Over the course of few months, as words spread around, more and more will turn up.

And of course, every year there should one major vigil held at KL, perhaps couple of days before 31 Aug at Dataran Merdeka?

And then there is the issue of permits, sigh. Perhaps I am being too idealistic here?

Here, i would like to highlight an article by Mr. Brandan Kuppusamy, a journalist who choose to see and pen down Fair comments on 'both sides'. The electorate believe they woke up to a new Malaysia on March 8 minus race, religion and discrimination and therefore it comes as a shock that the very same people who had preached “common human” values have fallen back on old habits. Those who support Hindraf, Pakatan Rakyat, Raja Petra are misguided morons.

Hello... is that the REAL "nstman"? Do you know some pussylickin' Umno cybertrooper or SB guy left a dumb anti-Anwar comment on my blog using your nick. But why "nstman" - you work for the NST or what? I dedicated an entire blogpost to deconstructing defler's comment - at the time I wasn't aware he was a FAKE nstman, my apologies!

This is what RPK has always been encoraging us to do.

One in Penang is in the pipeline for Nov 15th. On behalf of the planning team, it is my pleasure to invite you and other bloggers from anywhere in Malaysia to be a part of this Penang Anti-ISA vigil. Some of us will be driving down for the PJ vigil. Met you two weeks ago at the PJ vigil and am looking forward to meeting you again, sir.Details later via email. Thanks.
Cheers,
Paula

I fully agree with Peter. People from Subang Jaya should come over to the Amcorp Mall Padang which is big enough to fill up thousands. Marina, Harris and Zorro cannot be everywhere on Sundays as they are already travelling to other vigils on the other days! As it is, some of us are already coming from other parts of KL and we think it is better to have a big group in one place than be fragmented.

yeah i was suppose to attend the 1st planning meeting where paula attended but due to work can't attend. anyway i had asked the leader (howie the leader, right?) to rope me in the committee, and a week ago already told him i'll be joining the 'rombongan' to PJ.

don't worry. penang will continue with the vigil or any activities to support RPK.

vigil all you guys want ,till the moon turns blue.Your mate will rot in jail.hastalavista baby!

Having the vigils every week at the same venue would very soon wear off the enthusiasm of the participants. As time passes, it can be anticipated that the crowd will get smaller.

A remark by SH Tan saying that the vigil should roll down the peninsula from North to South in major towns and then start all over again from the North is worth looking into.

Right now the various vigils are carried out all over the place by volunteer groups and although is commendable and appreciated, it lacks the critical mass to create an aura / feeling of camaraderie and excitement in the crowd.

The organizers should have a committee to plan and organize the vigils so that the efforts are concerted. If this is done, the organizers can arrange for guest speakers,local opposition MPs(?), musicians/ choirs fr local churches/ temples to perform(to give it a muhibbah feeling) etc etc. (Above are just suggestions; please check if this are allowed by the police first or whether such activities need permits!; we don't want the participants to be arrested on charges of illegal gathering! )

With a proper programme and a time-table/schedule, the date & venues of these vigils in respective towns can then be announced a month in advance so that people can mark it down in their calenders. (The mother of all the vigils can be held once a year at Kamunting).

The outcome of such planned gatherings will see an increase in crowd participation as well as a stronger sense of group dynamics.
Most important,such planning will also ensure that there will not be any burn-out effects at both ends ( ie on the part of the organizers as well as the participants). Wishing you Good Luck and God-speed.

A GOOD ATTEMPT OF IMPERSONATION INDEED.....

I AM AMUSED TO SEE HOW SOME WILLING TO GO AS LOW AS THIS TO PROVE SOMETHING...

AFTER 8 MONTHS OF BLOGGING, BY THIS ATTEMPTS I SEE THAT I AM DOING SOMETHING RIGHT.....

P/S: TO THOSE WHO HAVE NO IDEA OF WHAT I AM TALKING...

MY REAL BLOG ADD IS http://indiansmalaysia.blogspot.com

http://indiansmalaya.blogspot.com ( as used by the commentator above)