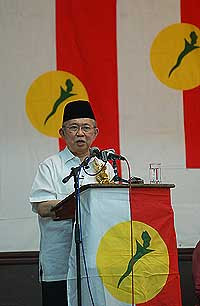 NO MONEY, NO TALK

That according to Malaysiakini cost Ku Li any chance of challenging Najib.

Tengku Razaleigh Hamzah failed to obtain enough nominations to contest as Umno president because he refused to bribe delegates in return for their votes, said a former aide today.
MCPX

According to Kamal Amir Kamal Hijaz, representatives from more than 50 Umno divisions had approached him for money prior to the division meetings.

"Some asked for RM500 while others wanted RM1,500 per head. (But) I told them that we didn't have money. Tengku (Razaleigh) does not want to give money for nominations.

"Tengku only offered himself to be evaluated and chosen by the delegates and will not give money in order to obtain nominations," he told Malaysiakini.

At the time of writing, incumbent deputy president Najib Abdul Razak had obtained 141 nominations for the top post from the 142 divisions that had held their respective annual general meetings.

Tengku Razaleigh is Najib's sole contender and has only one nomination - from his home base of Gua Musang when the division met on Saturday.

In view of this, Najib has won the post uncontested because Tengku Razaleigh can no longer secure the necessary 59 nominations since only 50 Umno divisions have yet to meet.

According to Kamal Amir, the voting method at each division had also hampered Tengku Razaleigh’s bid to receive nominations.

He said instead of having a secret ballot, many divisions had resorted to a show of hands.

"These divisions include those in Kelantan. Only the Muar division held a secret ballot. If the voting were held in the form of secret ballots, I'm confident the nominations for Tengku (Razaleigh) would be different," he said.

Kamal Amir claimed that Tengku Razaleigh was a nominee in 67 division meetings thus far. He also lamented that many of the meetings did not thoroughly discuss motions that were tabled.

Instead, he claimed that most of the delegates left the meetings right after the voting process.

AND THESE ARE THE TYPES WHO WILL DECIDE FOR US MALAYSIANS THE PREMIERSHIP OF THIS COUNTRY?

INDEED, MONEY IS THE ROOT OF ALL EVIL
AND EVIL WILL BE DELIVERED
TO RULE OVER US.

HERE ARE THE LYRICS:

TengKu Razaleigh, are you really NAIVE? Just one simple reminder to refresh your fragile memory. The Divisional Heads (or whoever they were) were not asking for money to get you nominated. They were merely expecting you to dish out the NEP to get and oil the nomination machinery in motion. So, no NEP, no talk. It's only just the NEP from your own kind of people, my dear Tengku. Nothing more, nothing less. Got it now?
malsia1206

JJ, I dont get it. It is inanimate but it can bring great joy and cause great havoc (like you get sued big time because you did not respect the value of that inanimate piece of colored paper that somebody said you still owe them. I love money earned honestly and it gives me great satisfaction that I earned it and can use it the way I want to use them. It is the inordinate use or misuse of money, that can bring about evil deeds. The coffee smells good, no?

Wah. you mean politicians are cheaper than prostitutes?

Why?
For that money
Prostitutes mesti tahan one night stand

Respect to KuLi, I might not know much about his fella but i have to say I've been growing fonder of him, there are only few decent people left in UMNO

No, no, no. Each division may have several hundred money-suckers... and each demands RM1500... To pay all such in 141 division may come to many multi-millions.

Money IS NOT the root of all evil.

The LOVE of money is the root of all evil.


1Ti 6:10 For the love of money is the root of all evil: which while some coveted after, they have erred from the faith, and pierced themselves through with many sorrows.

Money isn't real, folks, it's just a convenient symbol of wealth (e.g., RM1 = 3 bananas; RM1,500 = 1 Umno nomination; or RM1.5 million - suburban house with garden). If money isn't real how can it be "the root of all evil"? Even the LOVE of money isn't all that bad, because LOVE is always a positive value and most folks who THINK they love money soon learn, after they accumulate heaps of it, that money doesn't warm their beds on a cold night (though it can buy a couple of giggling Cambodian teenagers or an African contortionist :-). Nor can money be eaten or drunk when you're lost in the desert, though it can be burnt to keep you warm for a few minutes.

500 million commission for each arms deal. where is it going? still want to guess?
kuli, just walk out from UMNO. Zaid will follow. Do it, and you two will find lots of followers. I for one will join you in your struggle for a better of Malaysia.
Zorro, are you on?

You said "AND THESE ARE THE TYPES WHO WILL DECIDE FOR US MALAYSIANS THE PREMIERSHIP OF THIS COUNTRY?"

Not really. All that they are doing is, like the 40 thieves, selecting Ali Baba to be their chief. But that still does not make him Prime Minister as yet.

It is the scum bags in Dewan Rakyat who, if they had any rectitude at all, will withhold their support for Najib to lead them, who by their silence will allow Najib to go claim the appointment of premiership for himself from the Agong.

These scumbags you will find in MCA, Gerakan, MIC, and all the other component parties from Sabah and Sarawak as well as, of course, UMNO. By pretending to be pleased with Najib's ascent to power, they will be selling their souls to fear, greed and lust.

You say: AND THESE ARE THE TYPES WHO WILL DECIDE FOR US MALAYSIANS THE PREMIERSHIP OF THIS COUNTRY?

I think that is something we need to think about seriously.

Corruptions at the highest level of their umno food chain.
And ACA managed to nab 2 low ranking cops for a mere 200 ringgit kopi-O.

What cock is Ku Li accusing the UMNO people about..how can he simply accuse the division heads? Doesn't he as UMNO member knows that UMNO members are so f8cking "clean". He is his own kind so he should know better to accuse them of asking for cash for votes..anyway to wriggle out of these "malicious, unfounded, sour grapes balah blah blah" accusations, all they need is to swear they never asked from Ku Li.

Personal note to KuLi (coolie)?. Why continue in UMNO..just leave..no one wants you..PLEASE LAH....shut the fuck up