NOBODY SHOULD NOT READ THIS.

I made up my mind not to blog on Saturdays and to spend Saturdays reading blogs and catching up on emails and the Facebook.


Sudesh (HERE) my condo buddy and President of the Resident Association and JMC, were lunching at Kana's. I arranged the lunch to inform him that I was reliably informed by a lawyer friend that the lawyers from our developer Puncak Dana has sent out a notice to demand that both of us retract the postings where we whacked PD for robbing the residents of our lake. I have not received the letter but they will regret that the only compensation they can get from me is the ciku plant I planted under Danny http://letswheel.blogspot.com/ (Kerp's) window. The ciku plant is only about 3 feet tall but bearing fruits. I malt-water them regularly at around 3am or 4am or is it through fright that they are bearing fruits. I don't know. These pirates can have this ciku plant and if they are not satisfied they can have a pound of my flesh, but God help them if they spill one drop of blood. Just a pound of flesh, and no blood please or I will sue those mother-effers blood-suckers! Sudesh, too received no letter to date and he had to rush off for a cooking class....this lovable giant of a man is into cooking now. As we were about to leave I was pleasantly surprised when PKR's Sec. Gen Datuk Sallehuddin Hashim came by to say: "Zorro, nothing like a late lunch. WHAT'S UP?" I told him about the developer wanting to sue for defamation and he left with "WHAT'S NEW?"

So why am I blogging today. Whilst thrawling my blogroll it was "The Man from PAS" as my next read. I featured this blogger as my Friday Guest Blogger last week. His latest posting (Friday) is riveting and this has to be shared: 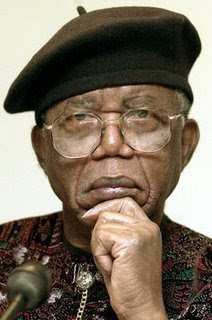 For those who read Chinua Achebe's (left) works, mainly his books on post-African independence, you must have seen that two themes run through his books: the sheer hypocrisy of the African leadership and the question of neocolonialism. Immediately after majority of the African states gained independence, Achebe warned the African people that they faced a new colonialism: the deceit and manipulation of "home-grown" leadership.


He called on Africans not to buy the "patriotism" of the local leadership since they were not patriots by any measure. He repeatedly warned them that the new "patriots" will use whatever they could to sustain themselves in power by using catchy phrases like patriotism, nationalism, independence, cultural superiority, etc, [Ketuanan Melayu] while they rob them. A lot of these "patriotic" qualities can be seen in the kind of leadership he portrays in his book: The Trouble with Nigeria. When I read that book, I immediately recalled Najib Tun Razak's bizzare Glocal concept.

In 2004, Achebe, one of Africa's leading writers has rejected a National Honours Award from his government in in protest at the state of his motherland. "'s condition today under your watch is ... too dangerous for silence. I must register my disappointment and protest by declining to accept the high honour awarded me in the 2004 Honours List", he wrote to immediate former Nigerian President Oluṣẹgun Obasanjo.

In his satirical novel, A Man of the People, 1966, Chinua Achebe exposes the sheer hypocrisy of the "patriotic, religious and nationalist" African leadership ala Umno. One area he covers is the conduct of the leadership's children. A man is his children they say. And in the African and Eastern (Islamic) tradition, a man is measured by his family. There were times when certain Muslim leaders were rejected because of their children. It was argued that one who couldn't "help" guide his children couldn't shoulder the (Muslim) community's burdens.

In one instance, Chinua talks of the main character of his novel, Chief Nanga, the powerful but corrupt Minister of Culture and his children. As you can see, Mr Nanga is supposed to protect the ideals and the culture of his people and nation but he is undoubtedly its Number One enemy. Chief Nanga always brags that's he is deeply religious and nationalist, yet he doesn't subscribe to any of his people's culture though he is the main guardian of that culture. Ironical indeed!

The Minister urges his people to be proud of their "supreme" culture and status. I guess Umno Ministers' Ketuanan Melayu must have crossed your mind by now. However, none of his children speak their local language. Although the Minister roots for local schools, he doesn't take his children to them. In , it is well known that none of Umno Ministers' children attend local schools and if they do, they are the International Schools owned by the "evil" Westerners. Yes, "evil", but they like that "evil" though they tell their people that they are protecting their children from those "evil" people. I love this!

Mr Nanga's children can't even eat the local food but their father urges the locals to eat Home Made products so that they improve the "local economy". There is an instance in which Mr Nanga's youngest child calls his grandmother unprintable names for being a local and backward. However, their father deceives his people by being populist and a purported nationalist and positions himself as the only guardian of his people's strategic interests. Yes, Umno Ministers tell the Malays to trust them alone as the rest are enemy sympathisers. Deceit and manipulation is the culture of scumbags.

Though Mr. Nanga reminds his people of his deep religiosity and commitments, his children's hang out is not the Churches but the popular entertainment spots in the trendy parts of the city. Their father is an adulterous person but always reminds his people of marriage fidelity. The evils and the shenanigans of Umno type Mr Nanga are unending and immeasurable.

There is one Umnoputra who is called Najib Tun Razak. He tells us to trust him since he alone can "protect" us. He lambastes others and talks of "culture", "Islam", "manners", "Religiosity" and of course co-existence and "integration". Well, we know what that integration means. May be it means grabbing every girl's breasts whenever we can get that. The trouble is that not all of us are filthy rich for the girls to "donate" their goods like they donate to one young Najib.

Our beloved patriotic leader Mr Najib doesn't allow any of his children in Ketuanan Melayu schools. That's why his son can't attend a local college. But he talks like a typical Chief Nanga about education and our children.

When I read NTR's "glokal" comment in the news sometime ago, I said "wait a minute, where did I first hear that word from?" Then it struck me, I read and learnt of it in the best-selling book The World is Flat by Thomas L. Friedman. So you see, again it is something NTR tried to pass off as his idea this word "glocal" when it is sheer plagiarism as only Malaysia Boleh leaders are capable of. When NTR used that word he should had given credit to the original pepetrator of "glocal" Mr Thomas L. Friedman.Shame,Shame lah PM-in waiting!

Those who live in glass houses should not throw stones.

Leaders with low morals are not fit to even run the neighbourhood provision shop, let alone pontificate to the world.

The Chinese got this right: One must first manage one's personal affair well followed by the family's then the country's. Use this yardstick on our 'leaders' and most of them will fail.

Lunch in Kanna's was good..however I would not be able to offer such a precious "gift" as a ciku tree. But I did have a good crap after Kanna's which is up for grabs. Going once..twice...