BECAUSE GOD IS EVERYWHERE, I'LL BE THERE TOO. 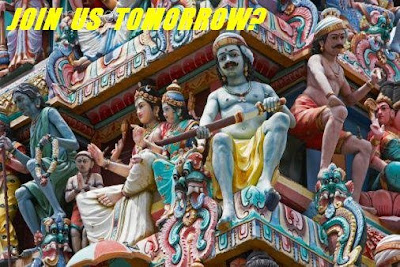 They forbade us to light candles; they say do not wear NO TO ISA tees; they harass cyclists for Change and now they frown at temple gatherings. But I dont care. I will join those who will be at Rasa tomorrow to lend solidarity to my Indian brothers and sisters and participate in the Power Prayers to rid us of the ISA. The power prayers must be working as a good number have been released from Kem Kamunting.

I produce here Haris take on events that developed.

Since the detention of the HinDRAF 5 last December, people throughout the country have been holding prayers for theIR release, not just of the Hindraf 5, but for all ISA detainees.

In Hulu Selangor, the Hindu community, too, have been saying prayers for the release of the 5 every month during the ‘Pournami Pooja’ ( which, I’m told, means ‘power prayers’ during the full moon ).

Last month, those prayers were to be held on the 12th at a temple in Batang Kali.

2 days before the scheduled prayers, one of the members of that community was summoned by Special Branch to their headquarters. This individual was told that the prayers scheduled for the 12th of November must not proceed. The officer insisted that there should not be prayers for the Hindraf 5 and that if it did proceed, devotees who participated in the same would face arrest.

Initially, the community, no doubt intimidated, were minded to cancel the prayers to avert any untoward incident. There was, thankfully, a re-think, and with the support of the temple management and devotees, the brave Hindu anak-anak Bangsa Malaysia of Hulu Selangor proceeded with their prayers on 12th November, notwithstanding efforts by ‘you know who’ to intimidate devotees with their presence and intrusive behaviour.

This month, the Pournami Pooja is scheduled for this Friday, 12th December.

Our Hindu brothers and sisters in Hulu Selangor are, understandably concerned about whether they will face any reprisal from the police authorities this Friday and in the coming months.

Last Friday, some of us accompanied the individual who had attended at the Special Branch office on 10th November, to lodge a complaint with YB Ronnie Liu, YB Teresa Kok and YB Xavier Jeyakumar, who make up the 3-man state exco committee to look into issues of temples and churches in the state.

The YBs have assured us that they will be taking this matter up with the state police authorities.

Meanwhile, I have been informed that our Hindu brothers and sisters in Hulu Selangor will be hosting a very modest Malam Mesra Rakyat at the Subramaniar temple, Kg Kandiar, Rasa, Selangor at which they will be holding their Pournami Pooja this Friday. They have asked me to extend an invitation on their behalf to any and all who would care to partake in fellowship with them.

The evening’s programme and a map appear below. 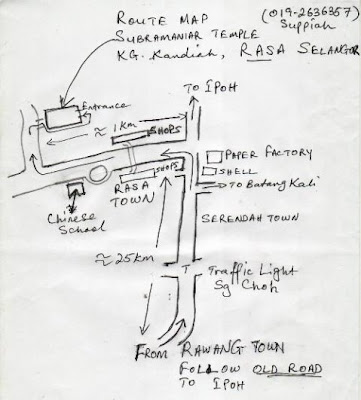 8.30pm - Mantra recitation and other rituals

Botak is loosing his b*lls, now confronted with the power of prayers.
This Indo magician man is definitely no match to the Almighty.

Great piece Zorro, im still wondering if we are living in Zimbabwe or Burma --- mind all boggled with this statement by this officer--- its like saying --do not pray for Mandela's good health because Albar does not like him --- Great UMNO logic and intimidation!! They are in vain!! If you pray you get arrested?? Great guns!!
http://sjsandteam.wordpress.com/

Let's continue to Fast and Pray for Wisdom, Revelation, Peace and Tranquility to prevail.

Let the "Candlelight in our Hearts " continue to shine forth in ' Love, Hope and Solidarity '.

Greetings Uncle B and all,

No doubt these 'Batang Khas'(SB) breed are going to be in attendance during prayers this evening, mingling amongst the crowd and devotees.

They may not be in uniform but one way of spotting a pig - look at the shoes they wear, which often gives them away.

Pray for all detainees, pray for all the oppressed but more importantly, pray for the well being of ALL, M'sians as well as other creed.

To my fellow Malaysians, do not be cowed, do not be afraid of the Special Branch threats.
The right to worship and practice your religion is enshrined in the Constitution. It is your birthright.

There is nothing the Police can do to stop you. I'd very much like to see face of the DPP who tries to frame a charge against a group of peaceful worshippers inside a temple "for engaging in illegal prayers ?"...kakakakaka...

A fair judge would throw the case out in about 5 minutes.

At the same time I find it very disturbing that Police have started interfering with acts of worship inside a temple. For religious processions on public roads, of course the police have a responsibility to regulate it for safety and public order.

But for prayers conducted inside a temple ?- the government should stay the F*ck out.

This is really getting ridiculous Uncle Zorro......now, who we pray for is also subjected to approvals by those idiots!!??

What next? Wanna go toilet also must ask for permission?

Soon we will have to hide and pray. Who knows, soon they might even tell us that you cannot eat in a group of more then 5. So wedding dinner will be limited to 5 per table. Mahathir was right. How can we ever achieve Vision 2020?

I ll be there to cleanse my sin for not being able to do enough for the people and for the betterment of this country we all called 'Home'.

I believe The Divine has Answered our Prayers with Kuala Terengganu.. At the very least, I took that as a Sign of More to Come.

Lets continue to Pray and Watch.

While my theology of God differs, I agree that this is very inclusive that people of all races can come and pray to their God for the release of people who are persecuted

According to wiki, Barisan National is a party whose membership was only possible indirectly through one of the constituent parties.
1. Has this party held their annual AGM yearly?
2. Has the party comply its constitutions and registrar rules and regulations so far?
3. If it is represent only by a party, how come in elections, it is represented by individual candidates?
4. Are those candidates in the election under the Dacing pic legal?
There must be a technical somewhere to ensure it is illegal party.

but if they still refuse to change and use violence against us, (as if they haven't) we still can't do much but gotta wait till the next election, right???

MALAYSIANNIGER HAS THIS TO SAY......

THE MOMENT THE BN GOVT OR THE POLICE START STOPING THE COMMUNITY FROM DOING THEIR PRAYER,IT MEANS THE TIME AS COME THAT THE BN GOVT LEADERS AND THE POLICE ARE LOSEING GROUND IN THIS COUNTRY MALAYSIA.

ALL THIS IS BECAUSE THERE ARE HALF BOILS EGGS LEADERS THAT WE ELECTED AS PM,DPM,MINISTERS AND OFF ALL MP WHO ARE BALL'S POLISHERS TO THE BN GOVT AND THE UMNO.......

WHAT IS THE SO CALL LEADERS WHO SAY THE INDIAN COMMUNITY WILL ONLY BE TAKEN CARE BY THE SO CALL ONE PARTY MIC DOING?//////

MESSAGE FROM MALAYSIANNIGER TO THE BN GOVT OR THE POLICE DO NOT PLAY WITH PRAYERS,IT WILL BURN YOU FOR GOOD........

MALAYSIANNIGER WITH MAKAL SAKTI SAY NO TO BN GOVT AND TO ISA.....

The BN government is doing a good job. They are actually encouraging people from all races to get together and pray. The longer they remain in power, the more their opposition will remain in unison.

The question is; Will this unison remain through thick and thin should PKR come to power?

Unison comes in many forms. When fellow Malaysians meet overseas, they instantly get along very well.

So do students overseas. They prefer to mix with their fellow countrymen.

When a country is threatened by war, everyone acts in unison to ward of the enemies.

But when there is peace, they are at loggerheads.

For the first time since the 60s, people of all races and religions came to gather in a Hindu temple to stand in solidarity against the ISA and other draconian and unjust laws.

I'm happy and proud of all of you, to see this happen.

Temenggong, I was honored to stand beside you in that Rasa temple last night.