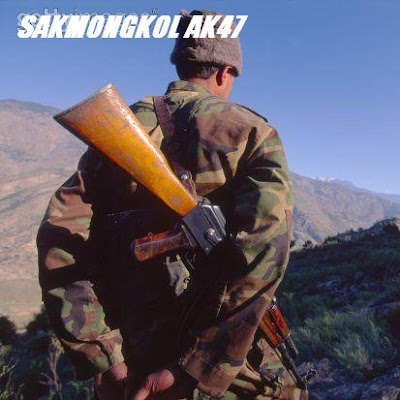 ABOUT SAKMONGKOL AK47 aka Mat Tomoi

Sakmongkol AK47 is the nom de plume of this blogger. He was ADUN of Pulau Manis, Pekan.(2004-2008) Trained as an economist at the of and the properly trained is another matter. Sakmongkol was a legendary Muay Thai fighter. AK 47 is the Russian made firearm. Sakmongkol will punch, elbow,kick, knee opponents. If these fail, he will fire his AK47.

I thoroughly enjoy reading him and he has been on my blogroll as Sakmongkol - the fastest draw.
I like his raw fervour, his care-a-damn breezy style that can floor you muay-thai fashion but above all he aims and fires unlike the subprime politicians he knees with precision, most often. He should know better because he was there. He definitely gives you a better take on my yesterday's BAD, BADDER, BADDEST. Have an enjoyable read....its an intellectual treat.

A primer on Sub-prime politicians.( thanks to analyst at large).

I remember a polemic between two intellectuals in the late 1970’s. One was the artist( Redza Piyadesa-he has passed on I think) and the other the literary critic and gadfly, Salleh ben Joned.( don’t know where he is). Cant remember what the actual quarrel was, but can remember, the metaphor used. Can the act of urinating be considered good art when captured on canvass? Some call it urinating, Malaysians call it just passing water. Passing water and urinating is the same. The same thing is viewed differently when different terms are used. Urinating is regarded as urbane, sophisticated, while passing water is regarded as crude and plebeian.

Now take the term sub-prime. Prime is tops, number one, the best. Sub means below. So when the term is used on say, mortgages, you have sub-prime mortgages, which simply mean the mortgagees are below standard. But you lend them money anyway.

How did we allow sub-prime borrowers get loans in the first place? Greedy and easily grease-palmed bank officers can be kau-teemed by borrowers. Borrowers inflate their incomes. They can do this in so many ways and the falsification scams are countenanced by bank officers. Maybe over karaoke sessions, dangdut, expensive cigars, Dom Perignom, who knows?

Lending institutions lend credibility to subprime borrowers by having the government create special purpose vehicles. Something like Dana Modal or Dana Harta. Or maybe even Khazanah Holdings. These buy up the subprime mortgages from front line banks. Banks get more money as they become more liquid. and lend some more. The institutions who mop up the sub-prime mortgages perhaps are backed by insurance/government and so they think, they have security.

Next enter the credit ratings bodies- that pool of super intelligent financial analysts, accountants, economists and so forth, who give their sage-like assessments on the mortgages bought by SPVs. They say these are AAA rated, others are EEE rated( not sure they do this or not).

The whole thing is an unsupervised scam. Borrowers bluff their way to getting loans with collusion from officers who sell loans to SPVs who take out insurance and sell to investors because their portfolio holdings are rated best in their class. Until, they run out of borrowers or until there are no more crooks around to lend money too.

That’s the same process on how you end up with sub-prime politicians. Call them by these terms, you have a more dignified, refined and sophisticated terminology. In reality, they are really- half past six politicians, nitwits, braggarts and so on.

How did they get past the branches? Because those active in kampong levels are basically layabouts, nothing better to do or are just people looking for easy rides. They make up the majority of the delegates at branch levels and crooks elect the best among them.

They move on to bahagian or division levels. Operators at branch levels move around the bahagian singing praises of this and that person. Giving endorsements and certification or accreditation. These newly anointed ketua cawangans enjoy some inflated reputation and earn some prominence. But the number of crooks receiving similar accreditation from professional apple polishers is many. So they compete to get approvals from divisional office bearers. Division office bearers too want continued support from these sub-prime ketua cawangans and so repeat the same process. Fearful for their own positions, they give high ratings to subprime ketua cawangans, giving overestimation on the worth of these goons.

The process is repeated and the inept among the subprime ketua cawangans and divisional officers get booted out. The fittest, i.e. the trickiest and worst lowlifes among them get elected to become the anointed office bearers at division levels.

In the end, the inbuilt sub-priming process, give birth to sub-prime politicians at national levels. Hence you are saddled with the Tajuddins and Bung Mokhtars of the world.

It is appropriate that you give sakmongkol AK-47 this honour. He does not pull any punches indeed and writes with a verve and panache that is quite rare in the blogosphere.

de minimis - I fully sokong that...and you might be next brother.

dear Zorro/'unker' Bernard,
my, this is indeed an honour to be featured as your friday guest blogger. we are all looking for the same thing- a sensible world founded on reasoned arguments. we all try to our part.
thank you once again. hope to meet up with the masked avenger soon.
ps. like the picture. may i use it on my blog? thanks

Hmmmm I'm ready to face my day now after that thoroughly intellectual stimulation. Thanks, darling!

Sak, go ahead with the pic.

Lita, I know you will love Sak's piece. C u at the vigil on Sunday?

Zorro, I like your Friday guest bloggers. Pse make it a permanent feature of your ever-increasing popular blog. Cheers from Tanjong Rambutan Pub.

Zorro,
This is one of your best choice for "Friday Honours". I have always visited his blog and enjoyed his take of happenings in this country!

I understand what you are saying. But if Petronas or Proton do not give Karamjit the recognition and financial support he deserves, he should look and take whatever opportunities arise overseas.

The F1 champs don't worry about being loyal to Germany or UK or Brazil. They take the best that's on offer. By performing and winning consistently, they will force the laggards (frogs in the well) to respond or be put to shame.

We will be proud of Karamjit or any other M'sian even if he races for a foreign oil co. We don't care whether Petronas, Proton or the Govt gives it's support; the shame and embarrassment is all theirs!!
http://donplaypuks.blogspot.com

But I call them mind @#$ked political zombies instead.

His analogy on the rise and rise of UMNO subprime politicians (and other bureaucrats) is spot on. Oh dear, and UMNO "dropped" him as a candidate in the last GE. No wonder UMNO is in such a sorry state of affair, and I don't see things are getting any better.

I agree with GUiKP - This is the reason why Umno is in this state! Fancy dropping someone with that kind of intellect! Or is his replacement "BETTER" than him? If so, then I can only say WOW, HEBAT!!