GIVE HER AND HER FRIENDS A CHRISTMAS THEY WILL REMEMBER 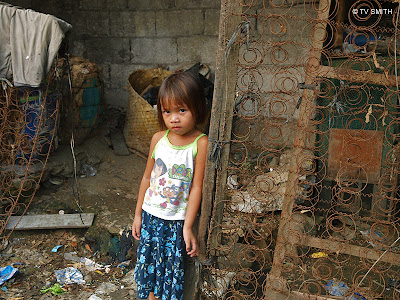 Christmas For Payatas
Posted by zorro at 2:01 PM

Beggars and street people in the Philippines, lets look at this for a min. Do any of you realize that about 80% or more of the people begging on the street are part of some sort of syndicate? This is something that I have been aware of for several years but have never been aware of the true details of the structure of the operation till lately, so based on some information that I have recently read on the internet I will try and detail the structure of the system.

Type A: An individual or often a pair of individuals c apable of earning a living some other way, but choose to make a living begging instead. Often, they will make a career out of
looking pitiful, with exaggerated limps, ragged clothes, etc. Generally, most money given to them will go directly to booze or drugs, with a small amount donated to the secondary object of food. Often they will have a child or two in their midst.

Type B: Is generally part of a larger family unit that takes turns working different avenues. Most often they send their children into the streets, as they know “rich” people have a soft spot for children. Usually money given to these types stays in the family unit, and after booze and drugs for the elders food is included in the budget for all members. There may be just a few in a family unit, or an extended family including dozens or even a hundred members. Family members will swap babies, meaning one will beg for a while, then when they are tuckered out they will loan (or rent) their baby to another member of the family in order for that person to use the child as a means of income. The elders and leaders of these groups will often do nothing, except sit back and collect the money. Many are well dressed and drive a car!

Type C: Syndicate operated. Although many foreigners have a hard time believing this, a large portion of beggars in city streets are part of a syndicate, sometimes numbering in the hundreds. The proceeds are collected generally several times daily from the beggars, who are often children or disabled people, who in return for their efforts are given a place to sleep and a meal of rice or two per day. Often people will rent babies and children to syndicates in order for them to further their collections. The operators of these syndicates are generally quite well off, as they earn money from every child and cripple who is working the streets for them.

Type D: Badjao. The Badjao are Islamic nomadic travelers, who go wherever they think the money is. They often are found in the more lucrative areas of the Philippines, dressed similarly in Muslim attire, begging. They trade babies, and generally live in makeshift cardboard or plastic (or whatever they can find) shacks along the water’s edge. They travel by boat, but seldom outside of Mindanao does a tribe have its own boat. Instead, they ply the shipping lines to get wherever they believe the money might be. They also migrate according to season and profitability. The Badjao have a long history in Asia, and are considered a large part of many Southeast Asian cultures. A Google search will turn up 36,000+ hits for the term “Badjao”.

So the next time you are tempted to give a little money to a street beggar, stop for just a min and think about what you are doing, ask yourself , will this money be used for what you believe, or is someone else sitting back raking in the rewards of your good intentions. I am not trying to say don’t help if you feel the need to, just do it in a smart way, walk across the street and buy some food for the individual you are wanting to help, take them to a restraint for lunch, get something that they can eat on the spot so you are assured that the helping hand you are extending is truly helping the individual in need.

I am a true believer in helping others when ever possible, but am always very carful about how and who is helped.

What do all of you think, am I wrong? Is there no hidden structure to all of this, and the much simpler reason is that the people you see are just victims of poverty