THIS MUST BE SHARED. 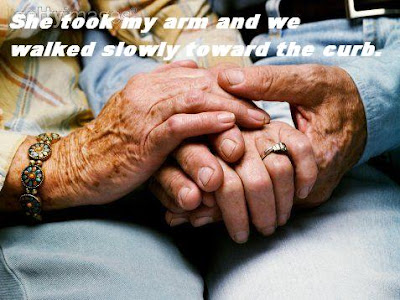 I arrived at the address where someone had requested a taxi. I honked but no one came out. I honked again, nothing. So I walked to the door and knocked. 'Just a minute', answered a frail, elderly voice. I could hear something being dragged across the floor.

After a long pause, the door opened. A small woman in her 90's stood before me. She was wearing a print dress and a pillbox hat with a veil pinned on it, like somebody out of a 1940s movie.

By her side was a small nylon suitcase. The apartment looked as if no one had lived in it for years. All the furniture was covered with sheets..

There were no clocks on the walls, no knickknacks or utensils on the counters. In the corner was a cardboard box filled with photos and glassware.

'Would you carry my bag out to the car?' she said. I took the suitcase to the cab, and then returned to assist the woman.

She took my arm and we walked slowly toward the curb.

She kept thanking me for my kindness. 'It's nothing', I told her. 'I just try to treat my passengers the way I would want my mother treated'..
'Oh, you're such a good boy', she said. When we got in the cab, she gave me an address, and then asked, 'Could you drive through downtown?'

I looked in the rear-view mirror. Her eyes were glistening. 'I don't have any family left,' she continued. 'The doctor says I don't have very long.' I quietly reached over and shut off the meter.

'What route would you like me to take?' I asked.

For the next two hours, we drove through the city. She showed me the building where she had once worked as an elevator operator.

We drove through the neighborhood where she and her husband had lived when they were newlyweds. She had me pull up in front of a furniture warehouse that had once been a ballroom where she had gone dancing as a girl.

Sometimes she'd ask me to slow in front of a particular building or corner and would sit staring into the darkness, saying nothing. 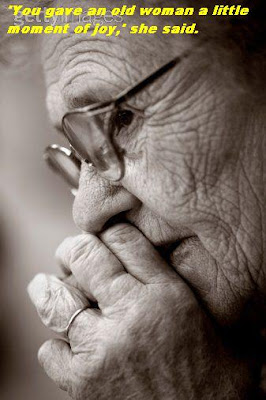 As the first hint of sun was creasing the horizon, she suddenly said, 'I'm tired. Let's go now'

We drove in silence to the address she had given me. It was a low building, like a small convalescent home, with a driveway that passed under a portico.

Two orderlies came out to the cab as soon as we pulled up. They were solicitous and intent, watching her every move. They must have been expecting her.

I opened the trunk and took the small suitcase to the door. The woman was already seated in a wheelchair.

'How much do I owe you?' she asked, reaching into her purse.
'Nothing,' I said

'You have to make a living,' she answered.

'There are other passengers,' I responded.

Almost without thinking, I bent and gave her a hug. She held onto me tightly.

'You gave an old woman a little moment of joy,' she said.

I squeezed her hand, and then walked into the dim morning light. Behind me, a door shut. It was the sound of the closing of a life.
I didn't pick up any more passengers that shift. I drove aimlessly lost in thought. For the rest of that day, I could hardly talk. What if that woman had got an angry driver, or one who was impatient to end his shift?
What if I had refused to take the run, or had honked once, then driven away?
On a quick review, I don't think that I have done anything more important in my life.


We're conditioned to think that our lives revolve around great moments.

But great moments often catch us unaware-beautifully wrapped in what others may consider a small one.

PEOPLE MAY NOT REMEMBER EXACTLY WHAT YOU DID, OR WHAT YOU SAID, BUT THEY WILL ALWAYS REMEMBER HOW YOU MADE THEM FEEL.

Believe me, I would have done the same under the circumstances.

Once, I saw a young woman with a child caught in heavy rainstorm while making a call at a phone booth near my house in Setapak. The thought of 'just in case they are struck by lightning' made me threw an umbrella to them. The next day, it was thrown into my porch when I was away at work.

I always believe that it is better to give something to someone really in need than to someone who would not appreciate it anyway.

I also believe, instead of returning a favour to the same person (who is rich and therefore would not appreciate it) it is better to help someone else in the same position as I when I needed help. This would really spread the goodwill further.

I want to cry.

a must read in all Malaysian pre,post or whatever it is they call schools

Yes it is. Life is not about all the possessions you can own.... its about the memories and the moments you spend with your loved ones and the ability to help others.

Yet another far fetched story from the utopian land huh?
another fairy tale just like your "CAUSE" that will bring tears of joy to all malaysians?

the same cause that you want us to believe in though you are the minority of malaysians?

A beautiful story indeed. Sometimes the act of giving is more rewarding than the act of receiving.

Uncle Zorro, can you imagine our infamous looters at Bukit Antarabangsa doing something like this? Most probably they would have robbed the old lady, taken her little suitcase and dumped her somewhere if they had encountered her.

Emoted tears down my cheeks.Multiply the memories and feelings of billions of people throughout the ages- unfathomable riches there

I believe This is What We are Trying to Promote by Walking Our Talk. At the very least, It is from My Heart.

One thing for sure, Our Compassion ruled over their misdeeds and We Shall Prevail at the End.

Lets Fight On by Carry On Living The Way We Preach..

Bernard, this was on the local papers, its a story from Chile and it is touching,
http://www.iltalehti.fi/nettitv/?28030071
there is the screen below watch that,play the video, it will touch even the hardest badhats amongst us,
but knowing umno, they will never learn. an example from the animal kingdom.

realster, why come here and spread your narcism, please spread your claptrap elswhere, you are what in french is called a chapeau anglais. if you don't like the articles why read moron, why come here. This is a blog for people with conscience.

Taiwan x boss is being charged 4 corruption, what about our corrupted ones ah !? immunity ah !?