As announced, yesterdays vigil was dedicated to Syukree. I don't know how to say it but the first thing I did when I got up this morning was to view again the video that Pat Lu put up. I was making my little speech and the video caught Syukree seated near my feet and I was kidding him about his mask and being a double agent.....that was the last image of Syukree alive. Then I caught the video of Sahari a/l Sunta, an Orang Asli craftsman residing in Lake Chini. I put up a post title: A Forgotten Malaysian.

At 1O:455pm, just a while ago I was going thru some business cards and a card fell on my working table: It was AINOL HISHAM MOHD YASIN's card. I KNEW (yes past tense) him as Sham, the late son of Dato Hj Mohd Yasin Hj Taib and Datin Hjh Salmiah Mohamed. Things have a way of happening. Hari Raya is always spent at the Yassins home over countless years. But I missed it this year. After Raya Sham who was already unwell was admitted to UH and slipped into a coma. When he come out of it I still did not visit him. I stubbornly held to this belief that a hospital is a place to recuperate and too many visits can tire a patient. Maybe it was to be that Sham did not want me to see him in that state. I am confused and making unforgivable and lame excuses for my negligence. 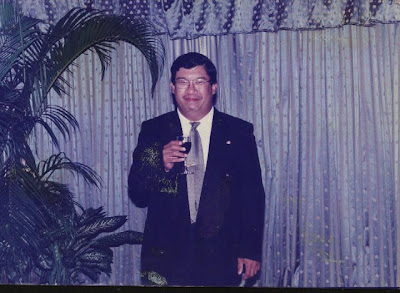 OK this is the gentle Sham, always smiling, always concerned about others - a career musician, composer remembered fondly throughout the country as an accomplished lounge pianists.

Sham first stint was at the old Merlin Hotel, (Now Concorde Hotel) where Ogy Ahmad Daud and Royston Sta Maria (of Roy & Fran) were entertainers at the same time. He

then got discovered and went on to work in the then mainstream hotels namely,

1st musician to perform there. Other resorts include Tanjung Rhu Beach Resort,

which ended up to be more than a year. He had also overlapping contracts 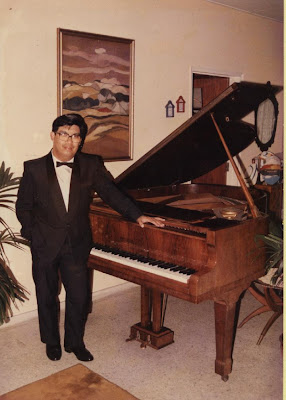 He also had performed @clubs and exclusive restaurants including Bankers Club,

The Royal and Derby Restaurant.

In between ALL his contract over the years, he had also been engaged for private

functions and festivities such as weddings, annual dinners, birthdays, Christmas,

New Year, which were countless in numbers.

Throughout his career, he had ventured into composing commercial songs,

member. Among his compositions were recorded by Ogy Ahmad Daud (Pop),

Karen did visit him and he asked Karen to sing him his favorite song: I have a dream. Karen did but emotion got the better of her and it is not possible to sing and cry.....Sham, I am deeply and regretably sorry that I did not see you duiring those difficult days. But please accept this dedication.

i dont know who the late Sham whom you have just described. your writing or should i say eulogizing is testimony of the great humanist that you are. i am indeed very touched by your dedication piece. i salute you, mr bernard khoo.
with warmest regards/sakmongkol

Datuk, I had to stifle a sob reading your comment. I already lost two young men....Syukree and Sham...is it true that whom the gods love die young?

Zorro, may you be comforted and may the dead be given the best by Allah the Almighty!

I don't know anything about the good dying young - but it sure seems to be that way here.

Both these men celebrated their lives: Syukree with his joie de vivre; and Sham with his music that touched your soul.

Yes, it is right you grieve their loss. But when you can, remember also their beautiful lives with joy - for it seems to me, that is how they lived.

I'm not much of an Abba fan (scandalous!?), but this is a wondrous song. Beautiful. Vigil material ;)

All the best and a very merry christmas to you.

Exactly from what you have described
Allahyarham's much disarming attributes, they were insuppressibly
the peculiar characteristics that I quite fondly remember him by. Nice of you, sir, to enact a special post in his remembrance. Although we, his ex schoolmates: calls him ainol but he would always be the amicable
friend and accomplished musician nonetheless. A johannian through and through.

People, I had to delete a comment by Hard-T under this tribute-posting to Sham. This was a very insensitive posting and had no bearing on the subject. However, it could be an imposter using Hard T, as I am well aware the original Hard T is incapable of such English. I doubt it is the original Hard T who as a Berita Harian journalist should know better than to post such insensitive drivel to ridicule the PR opposition.Even a retard would have decided better. Anyway I have kept the posting just in case Hard T wants to look at it to absolve himself.

Go ahead and use the following as comment on the posting on Santa:-

Zorro, thank you for the posting 'Yes Virginia, there is a Santa Klaus.' I suppose each of us celebrating Christmas strives, as we grow older, to rekindle the feelings that stirred in us as children when we waited for the day. With age those feelings wane, in part due to the skepticism the writer laments for the doubt about Santa. Reading Francis Church's stirring defense of Santa's existence, embers of those lost feelings began to re-glow. It was nice to recapture some of those long lost feelings.

Together with your reminiscences on the late Sukree and Sham, the posting on Santa is what I call your 'soft shoe shuffle'. Sometimes your blog can get strident; so these are welcome alternations of the shrill with the sublime. Let's hope for more such shuffles in 2009. After all, what the Prince of Peace taught above all was how soft power overcomes all.

Yup, the good always die young but could it be by design?

Night clubs, bars, an almost all entertainment establishments are polluted by cigarette smoke and it could contribute to bad and declining health for regular visitors. Working in these environments make it even worse.

Throw in the malt brew or Ribena and ..... voila.... the potent concoction comes to play.

Nonetheless, may music be the food of love, and his soul rest in peace.

i no afraid of huduh or whatever laws cos = better than the present CORRUPTIONS !!