DAM 21: A DISASTER WAITING TO HAPPEN. 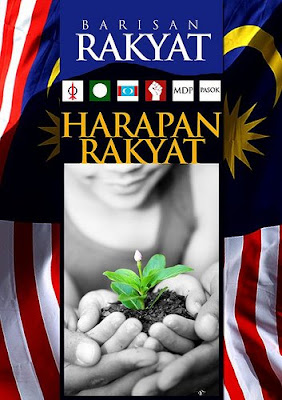 KUALA LUMPUR: The Medan Damansara Residents Association has set up a fund to raise money to support its four office bearers who are being sued by SDB Properties Sdn Bhd.

“We have filed our defence and hired a lawyer to represent us.

“I am ready for the day in court, We have been given a mandate by the residents to protect their interest,” he told reporters after attending a meeting between residents and several MPs including Deputy Federal Territories Minister Datuk M. Saravanan on Saturday.

The developer had filed a suit against the four in their personal capacity at High Court three months ago.

The association assistant secretary Randhir Singh said the association wanted the government to scrap instead of freezing the Damansara 21 hillside project.

“The authority may continue the project later. We want the government to put a stop on it.

“About 14.9% of the hillside is above 35 degree. It is not safe to the residents nearby. What is more important, the human life or developer?” he asked.

Randhir said the association appealed to all banks and financial institutions not to finance high-rise development hillside projects.

“The banks talk about the corporate social responsibility and environmental campaign but yet they still finance to these kind of developers.

“We also appeal to professionals including consultants and lawyers to not be part of such developments,” he said.

He said the residents as well as non-residents had been very supportive to the fund set up by the association three weeks ago.

“We even receive donations from those who are not staying here. We welcome donation for the fund to help the four who are being sued,” he said.

He said the association had set up a blog to highlight the plight of the residents on the website.

How low can things get?

The pinnacle of cowardice is when individual(s) in a body corporate, use funds from public institutions to launch massive punitive and intimidating lawsuits against citizens seeking protection of life and limb and property under perpetual threat of a landslide arising from shaky and ill conceived development projects. 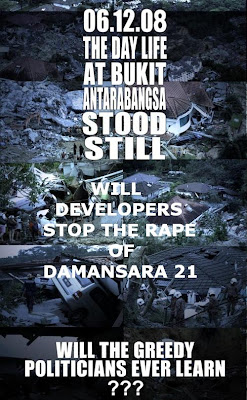 MCA deputy president Dr Chua Soi Lek has alleged that some hillside developers have abused their power to get approval from the local authorities to proceed with their projects.

These developers, he said, have 'levelled' the land to apparently make it ‘safe’ for housing development.
Posted by zorro at 5:55 PM

Big Corporations have the financial clout to bully and intimidate. Consumers should support each other in a concerted effort to boycott these bullies.

We must help ourselves.

HOW TO DECIDE BETWEEN PEOPLE & PROPERTY?

What comes first - people's lives or values of property?
When we are truly not being too selfish or greedy
We'll fully understand the meanings of human worth and liberty
Then it'll be easy to choose what's really genuinely needy

SDB Sdn Bhd has got somebody named "Lip Pink" on its BoD - hmmmmm - wonder what else we can DREDGE up about this firm...

I've been wondering why the developer responsible for Taman Bukit Mewah has NOT been named in any news report. Just found out it's a company called Intra Tegas Sdn Bhd based in Kajang - but who OWNS this company? Are there other property companies involved - who owns them? Very important questions. Anybody good at corporate sleuthing? We must name the individuals behind these corporations - only way to discourage them from behaving like bandits.

A majority of these hillside developers are owned by Chinese. Most of them have political connections. Most of them have Malays as chairmen. And these chairmen are fronts for Umno. Umno corruption plus developers' greed have ended up in landslides and loss of lives. Umno, your end is at hand. Your number is up. Umno has sold out the Malays, and the country.

Damansara Heights and the surrounding areas used to be a respectable residential address but it is all gone now to high density living and commercial ventures.

It is now as busy as the Federal Highway and yet more development is being approved?

I do not support nonsensical virgils or rallies but this is one of the rare occassions where I lend full support to ban more development at Damansara Heights.

No, I don't live there but I share the plight of the pioneer settlers.

Under the covers of Corporate structures, the individuals hide away so far behind the veil so that even the lifting the veil of incorporation might not uncover some of these people.

With SDB, maybe its about time the Blogging world put some focus into this company, its parent and its fellow subsidiaries and tear them apart. See if they have paid their taxes properly. See if they have engineered their structures in order to evade taxes. Connected persons transactions and such. And then maybe looking into the individuals behind the company too.

After all they started the ball game. Rather than the individuals suing, they use the company to sue. But their target, instead of the Resident's association, they target the individuals behind them.

I call that intimidation.

They have invited close scrutiny of themselves. Not just the company, but every other company associated with them. Every individual who is a stakeholder of this company. Every director of this company and his family too maybe.

The Managing Director of Metro Kajang Holdings Bhd is Datuk Chen Loi Lok. He was the President of the Real Estate and Housing Developers’
Association of Malaysia (REHDA) from 1998 till June 2002. He is currently a member of the Advisory Board of the
Construction Labour Exchange Berhad and the Immediate Past Chairman of the Building Industry Presidents’ Council.
He is also an EXCO Member of the Malaysia Crime Prevention Foundation, the President of ASEAN Association for
Planning and Housing and as well as the Deputy President of Eastern Regional Organization for Planning and Housing
Malaysia (EAROPH). He has more that 26 years of experience in property
development and construction related businesses.

rentals for PM residence = rm16,000.00 per DAY for 25 tahun contarct Plus berjuta2 for maintanence !! WOW !!
almost the same for dpm residence !

SDB have been around since the late 70's after diversifying into property due to the lack of demand on tin mining in malaysia. very much committed towards quality and services, their development have been mostly high ends.

they are never in the political forefront neither do they subscribe to any party. they did the politically correct thing to meet the NEP's 30% quota to include a bumi chairman out of survivor instinct than anything else and to ease approval process by authorities who are binded by the policy, although a unwritten law in itself.

the lawsuit is not politically motivated but do have some influences from within the ruling party big wigs. this action is taken so that the negative publicity of the project do not suffer which will affect the potential of it's viability and profitability.

furthermore, certain units of the development have been pre-booked by certain prominent figures.

this is one response I can think of for politicians who do evil...(just one response...what a brave journalist)...

Maybe the residents of Medan Damansara should hold their own candle light vigil every week until the development project is abandoned. This can certainly arouse the attention.

capital idea Tony....start it and Barisan Rakyat Bloggers will support.

Actually, we should now start cursing and swearing the buyers of these properties or those who might rent it. Indeed they are the cursed ones. And bigger curses to the banks who make it possible for both the buyers and the developers to see this project through.

Maybe the buyers, bankers and the developers of this project deserve s short stay in your most infamous Mexican Gas Chamber!

SDB bought this hill from MAA in 2005 With a development order (all nicely kautim). Incidentally, MAA just got a D/O last year on the hills off Ukay Heights behind Highland Towers which they wanted to develop but was delayed due to objections from neighbouring residents. Wonder if they will get to develop it or just sell it off. Perhaps their shareholders should ask MAA to stick to their insurance business!