WHY DOGS SNIFF EACH OTHER'S BUTTS. 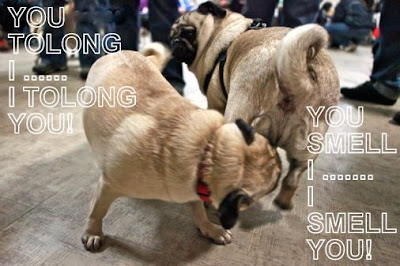 Do you ever wonder why dogs sniff each other’s butts?

Whether the dogs are new acquaintances or old ones, they meet up and immediately run to the rear. Most people believe this is their way of saying “hello.“ However, this belief is a myth. Dogs sniff each other’s butts for a much deeper reason.

The aroma emitted from a dog’s butt tells other dogs vital information about him. It tells his sex, health status and temperament. Therefore, on a first meeting, two unacquainted dogs know if they want to befriend each other or not.

So what does that mean to us?

We need to trust our dog’s instincts.

If he doesn’t like another dog, there is probably a good reason. The other dog doesn't pass the sniff test. So let nature take its course. Allow your dog to choose his own friends because in the long run he nose best.

Now I understand that the Johor Education Department chief Markom Giran and Markof Abd Mutalib's (husband to PAS candidate Normala Sudirman) Headmaster have sniffed each other deeply and their whiffs are compatible!

I pity the children in Johor. Markom was reported to have said:

In other words, when you work for BN leave your brain and common sense in toilet.

Master it is not this village idiot only,we have this same bunch of monkeys here in selangor.I thought that after 8/3 things would change sadly they are the d same

For things to change you must crack the whip,one good example would be the subang jaya ydp after this recent fuckup i bet my last dollar nothing will happen to him.I feel sad as i see people will calibre around us but so long as you are not a balls carrier these monkeys will be incharge.
.

Stupid idiot!
The government WORKS FOR YOU!
Hello!

How could anyone be 'impressed' by Markom?

In the video, he practically had to plead for a response from the 'captured' audience.

He won't last 5 seconds in front of a real crowd e.g. tell him to explain the 'virtues' of Interlok to an indian crowd without the FRUs around.

This smells like BTN making. That's Malaysian Education system for you!

The horror is still many others think like them.

Markom should resign with immediate effect from Government service upon PR winning the next GE.
How can people with such mentality be the Head of State Education Department?

Each year MOE churns out tens of thousands teachers with dickheads mentality who can't think logically!

One primary school senior assistant in Penang once told me she must support BN no matter what because this BN government pays her gaji. When you have idiots like her teaching our kids, Malaysia is sure doomed!

He didn't become the state education chief for nothing. Care to ask whether his own children are studying in Malaysia or overseas?

Another word, when BN tells him to jiak sai, he just opens his mouth.A dog has better brain stuff than him.

Dickheads like Markom are all over the country, gets promoted because of their umno political affliation. He is not alone, planted everywhere from Perlis to Johor, Sabah and Sarawak to do UMNO's dirty work, that's how evil umno is and thanks to spineless MCA, MIC & Gerakan for the state we are in.
We are doomed! Very soon we'll behind Indonesia, Thailand, Vietnam, Cambodia and Philipines, if not already!

Seriously, for our children's sake and that of their grandchildren, UMNO/BN has to GO.
We must all stay united to kick the whole lot of them out - yes "NO" to Barisan Nasional(BN)!

Another racialistic and despicable arsehole running our Bolehland Education agency. This clearly proved what type of bums we have now currently running every government agencies esp Education in Bolehland. No wonder, our quality of education has gone down the drain. Probably Bolehland is now at par with Burma, Laos...etc if not worst.
All these bums are only interested in politics and their ketuanan attitude like those similar dickheads in Perkasa. 1Malaysia or Malaysia1 my foot!!

zORROW,
What can do? This motherf@#!ing government employs this lowly uneducated dickheads from kampongs to run a state education.What is his kulification? Its sickening to see this lowlife runnng errands for those umno pukis in putrjaya.
A puki government dictated by umno pukis...to run the show...

Ask Markom, the Director of Education for Johore State...what he did and said was the behavior of a deranged low being!...a perfect example of an asshole wiper.

These bastards are paid a salary with Taxpayers' hard earned money and are supposed to be neutral. Yet they go around sniffing the butts of UMNO/BN.

A bunch of mangy curs or as they say, pariah dogs (with due apology to Interlok and MIC)!

dpp
we are all of 1 Race, the Human Race

This Markom bugger must have a smelly backside.Bugger him.

wow!
typical Kepala Otak fellas.
no wonder he is dumbno!

Markom is obviously an opportunistic ( or loyal ? ) lapdog paid to the brim to speak & act according to the UMNO script, but aren't all UMNO
members of the same animal mentality ?

...it all begins with a dickhead Education Minister followed by just as able dickhead deputies and then down the line with more dickheads like this suspiciously Indon-sounding cretin!You have to give it to the BTN for successfully churning out these robots!

sorry no interest in what all these moolayu got to say...

like the kiasu flers said... all these parasites are stupid & incompetent

This is what they called... budaya angguk & bodek.

Their pea-brain can't get them the promotion, so they must adopt these values if they want to go far or get a latukship.

what the hell is this .
goverment is not bn propety .
what f**k with this guy .
if in this case almost 80% of gov servent must be terminated

The people in Johor would not care less because they are enjoying free TV shows from Singapore's channel 5, Channel 8, Suria, Okto and Channel News Asia as their rice bowl is dependent on Singapore economy, not BN policy.

Just wondering if Nabi Mohamed had LOUDSPEAKERS fixed on the minarets of his mosque for azan.

But think again, electricity was not even available then. So, this loudspeaker stuff would be a DEVIATION from his original teachings, wouldn’t it?