Anti-dam groups said the two-billion-dollar Bakun Dam, which is scheduled to come online, would engulf a huge tract of the Borneo jungle in water. Approved by the government in 1986, the project is completed after more than two decades of controversy, opposition and financial constraints triggered by the 1997 Asian crisis.

During intermittent construction of the hydroelectric dam, thousands of indigenous people were uprooted and moved out of the construction and immediate catchment area. Large tracts of rainforests, where natives of the several tribes lived, were cleared to make way for the dam.

Bakun’s reservoir will cover 695 square kilometres and power eight turbines. But for the displaced indigenous people of Sarawak, Bakun is nothing but endless misery. Used to a life of farming, fishing and limited hunting, the tribal people have great difficulty adapting to a cash economy.

"The government must clarify the development plans for Sarawak and give all details, especially their impact on the indigenous people," said Meenakshi Raman, a senior official of Friends of the Earth Malaysia, a member of an international grassroots environmental network from which it derives its name.

"Our primary fear is that these projects involve hugely dirty industries like aluminum smelters and dams and coal power plants, which all degrade the environment in Sarawak and threaten the economy and livelihood of the indigenous people," she said.

The Bakun dam has an estimated generation capacity of 2,400 MW, considered ambitious for Sarawak’s small, agriculture-based economy, which has no use for such huge generated power.

The original Bakun plan was to ship the generated power through undersea cables across the South China Sea to Peninsular Malaysia. 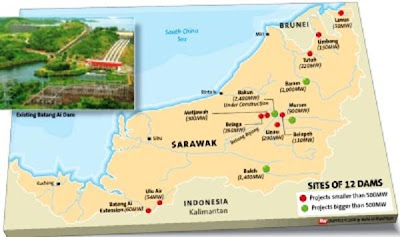 But it does not make sense because Peninsular Malaysia was already experiencing a power glut, with numerous independent crony power producers queuing up to sell power.

All these are in addition to the 2,400MW Bakun dam and will push the total generating capacity in the state to 7,000MW by 2020, an increase of more than 600% from the current capacity.

How dumb can one get?

Give me half a chance I could use this generated power to fry the asses of Joe SAI-LANG GANDUMB and likeminded Sarawak native leaders.

DANG AND NOW THIS:

Some 80% of the more than 6,000 longhouses and villages in Sarawak’s interior do not have electricity and depend on kerosene for lighting and cooking.

For in Sarawak’s interior, the cost of kerosene could go up as high as RM4.50 a litre or more because of logistical and transport cost, said Sarawak PKR chairman Baru Bian.

“It’s a heavy burden for the poor people of Sarawak, especially the rural population in the interior who pay substantially more for their petrol, cooking gas and other essential consumer items like food and clothing upriver owing to high logistics and transport costs,” he said.

Burden to the environment. Loss to the indigenous tribes. Money for the greedy. Disgusting.

I am ashamed to read that over 6000Sarawak villages and long houses do not have proper lighting and electricity supply after so many years in Malaysia.

One of the promises made for Sarawak joining Malaysia was to “eradicate poverty” and give “economic development”. Part of this development involved a lot of dam buildings.

Why are there so many dams and yet the ulu people miss out on getting cheap electricity and power etc? It seems so many still live in primitive conditions compared to the grand CM palace I saw on Sarawak river trip.

So where has all the electricity been used for?

I see a lot of new buildings in the cities and towns as shown in the internet. A lot the buildings belong to groups of rich people and companies. However all this visible wealth are not enjoyed by our ulu people. Instead I hear many have lost their land because the rich and power grab their land for timber logging and oil palm plantations.

We end up as colonial subjects under foreign Kuala Lumpur rule and our country become Malayanised and also lose our freedom and basic rights under repressive laws.

We get robbed blind of our oil and our land get stripped of its wealth while thousands suffer when the wealth would have been ours to use to pay for everything many times over.

All this wealth siphoned off to finance Malaya and fill UMNO BN cronies’ pockets.

Without the mega and white elephants projects how are the Umno morons and the cronies of shenanigan Mahathir going to make their millions and billions ?
Just look at Singapore they don't build mega projects but only projects that are in need yet they are in the first world while we are in the third world and will remain there for a long long time.
They were and are built for one purpose and that is to enrich themselves and as a form of bribe to the Umno cronies. There are so many white elephants already being built these corrupted Umno morons and cannot now stop this practices even with borrowed money !

About time for Sarawak and Sabah to free themselves from the clutches of umno.