IF UMNO DOESN'T, CIKGU MALA DOES.

On 9 January I posted

VOTING MADE EASY IN TENANG.

TO OUR CHINESE & INDIAN VOTERS IN TENANG WATCH THIS AGAIN AND THEN MAKE UP YOUR MINDS......

it has never been this easy before

UMNO says: We do not need Chinese & Indian votes!

UMNO did say this right?

UMNO did not shut him up right?

UMNO is saying that he is not wrong, right?

So if UMNO does not want the Chinese & Indian votes, give your votes to 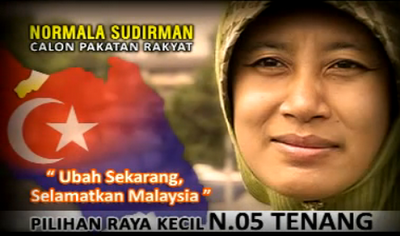 +++++
KFC has always been a friend indeed! You get it 24/7 during by-elections. After Sunday’s PC at Labis I decided on a KFC pack (to lunch whilst driving back to Segamat,) but MINUS the Pepsi that came with the order. This is my way of telling Johari, the MD of Permanis that I can live without Pepsi. After licking your fingers, you just need a TIGER!
Posted by zorro at 5:01 PM

Dont know what to say...

Its clear cut no hide in bushes, why support people dont need your support in first place?

How I wish I know the effects of the boycott which has been emailed for some time now. Anyone with a copy of annual report of the company? A significant drop in revenue and profit (maybe even a loss) would be proof (good enough to syiok sendiri) that the boycott was effective. But besides this boycott, it is generally advisable to avoid carbonated sweet drinks.

Tell the same thing to UMNO Chin and UMNO thamby...these selfish bastards, interested only to bloat their bloody wallets. All is not lost!...there are good number of non-malays willing to stick their middle finger at UMNO/BN evil and corrupted administration.

Beer is carbonated and packed with calories.The malty flavour is just irresistable.Cheers!

I was once a maintenance technician and had the opportunity of seeing how Pepsi and carbonated drinks were manufactured. I stopped drinking after what I saw. Don't get me wrong. The manufacturing process was hygienic. It was the ingredients...thick googey sweet syrup & cloudy liquid(carbonated). Too much sugar and detrimental to health. Best stick to warm water and Chinese tea.

Pick it up aready. Post it. Show no mercy.

This person whom the court found to be "CUAI" as a DO is found suitable to be a candidate.

The MB of Johor said this candidate involvement in the case is just as a "saksi". I do not know about you but I have never heard of a court found a witness in a case to be guilty.

Chua Soil Lek has no moral ground to speak about Normala's religious beliefs. Just as Christians would not like UMNO to forbid their use of the "banned word" Allah.

What is so bad about PAS form of Islam ? Look at how Tok Guru manage Kelanatan where PAS tolerate all racial and religious beliefs. You can see the longest lying Buddha in the Siamese temple in Malaysia right in the heartland of PAS Kelanatan. You don't see PAS government caning peple for drinking beer but we do see it in UMNO Pahang.

Enough of your MCA rhetorics and do not try to frighten the people in Tenang. Between PAS and MCA candidates, I will vote for PAS. What is so bad about PAS anymore. PAS, PKR and DAP leaders are more rational, tolerant, sober and more important of all not in the class of BN's corrupt, racist and divisive in their governance of the state and country. This is for sure.

Free t-shirt will come in handy to be used a rag to clean your house before Chinese New Year.

Yes, take your free (actually you have paid for it with your income tax) things but still vote for PAS!

The moon represents my heart!

UMNO has never been kind and like the Chinese and Indian in the country, they always view them as pendatang, enemies and sucker of the diminishing resources of the country.

It is the Chinese and Indian never or refuge to wake up. All goodies given are the minimum require to explore them. The mamak are the greater practitioner of art of deception and "pukai exploitasi".

Johari's statement is actually the true stand of umno.

So do not be stupid to believe in Chua Soi Lek who are no difference from Ridhuan Tee.

Zorro,
Mr. LKS had already conceeded, why all the fuss!!!
Why waste time???
Enough of Politicking...lah!!!

You should boycott KFC as well. for yuor health sake and also as a protest as it is owned by Johor Corp (umno-linked).

In that way Johor Corp will lose more money to be in further debt so that KFC can be sold to a non-bumi entity.

i no longer buy soft drinks manufactured by Permanis. i took the effort to check the label.

No, no and no junt food please ! KFC or Pemanis is just the same same. Never go near to them and that includes Pizza Hut as they are in the same group.

For that matter, we might as well boycott all companies owned by bn people. I think if we are focussed it can be done albeit slowly and surely it will gain momentum and snowball into an avalanche.

Hurt them where it matters most !