WE WILL CHOP OFF THE HANDS OF THIEVES, YAH?

STADIUM KELANA JAYA, my neighborhood stadium has always been the home of the annual COBRA SEVENS. I have never missed those annual weekends. Invariably I will bump into Nordin Manan, swig beers the whole day and end up cheering for the wrong team!

But on September 16, 2008, Stadium Kelana Jaya was MAGIC! Some 30,000 of us gathered to celebrate Malaysia Day and also to protest the illegal detention of RPK and MP Theresa Kok.

These pics by TV Smith need no further comment. 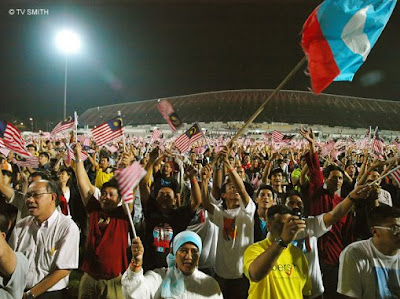 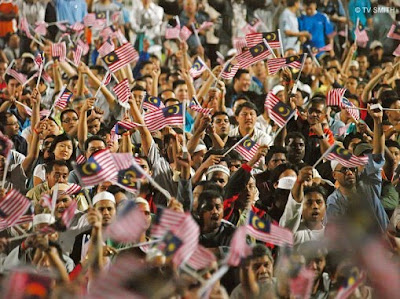 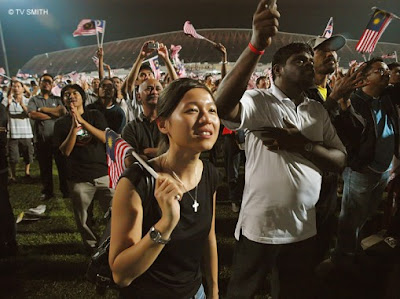 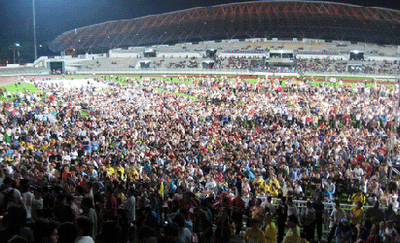 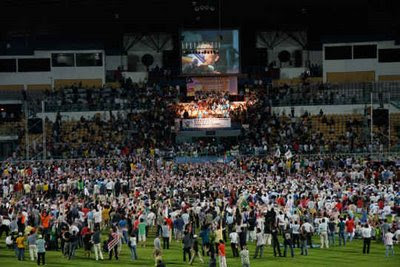 Come 23 January, at this same venue the people of Selangor will gather to protest the arbitrary appointment of a state secretary who has repeatedly and deviously exhibited his inordinate association with the BN government. This and many other BN agents are out to rob you of the Pakatan government that YOU installed on 8 March 2008. They want to take back Selangor from you.

YOU CANNOT ALLOW THIS! 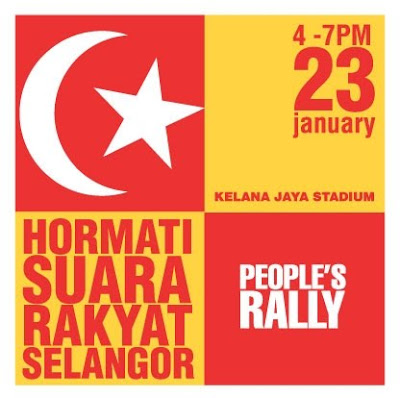 WAH! WE ARE TOP FIVE!

You title is blasphemous...be careful. It will backfire. PAS supporters will not like it...

I support chopping off hands of thieves....corruption is a art-form of thievery! Can you just imagine how many hands we can collect for prosperity.

... I'd much rather have a debate, but you see, there's no honor fighting an unarmed opponent.

Don't worry, I have many PAS friends.

A by-election in Melaka on the card?

Wihout bn,I will still dismiss pr as they are incompetant.Not delivering is one thing,but so many excuses that fianlly piss me off.I will support opposition[even indepedent,but no longer pkr and dap.

Zorro, I support you. Shall we used axe or sword?
Since there are so many of them, the executor may develop sore hand or shoulder,so, may be we can invent a hand guillotine. Clean and efficient.

Why you so sayang to the thieves, I have been robbed before, if I catch those bugger i put inside a rattan cage and drawn them to the river.

Yes, I agree that there are trojans within the local government but I think the fault should also fall on incompetent PR appointees in the local council.

Take the MPSJ new ruling, who heads that department ?

Another eg, Jalan University in front of Uni. Hospital, it has been with potholes for almost THREE YEARS and now only it is fixed because GE is looming.

What about Port Klang between West Port and North Port, there are potholes and with street lights since BN rule ? There is no difference just like what Ah Seong said,…..!

I can’t accept Ronnie Liu’s reasoning that the road is federal road. I think it is the duty of PR to highlight and make noise to JKR on behalf of the rakyat. All of sudden with the fat pay, they have forgotten who voted them in.

What about education ? Why aren’t PR taking up the issue of PPSMI (Maths & Science in English) ? This issue is an urban issue and urban votes. If PR dont give a damn just like BN, mark my word the urban voters will boycott in the next election.

So send the message to PR before it is too late.

Lets face it the Selangor Sultan is also becoming a Perak Munafik Fiasco. We will be there to show of power that Rakyat is KING and Agong!! Show power come rain hail or shine.

Don't worry .... if tiga line and Pekida come and Kacau...I will personally take them out cold with my SEAL Team! We will not allow Murderous Racist to trive in Malaysia. We will dump some nice Poo in a few of their cawangan UMNO.....

Lastly yes I agree its time for Pakatan to Parachute a few trojan into the administration NOW to disrupt the UMNO Trojans.....its as easy as ABC....suggest Restructuring, publish Vacancy in papers and appoint. Let the racist UMNO kick a stinker and the UMNO trojan whinge. One has to agree that Pakatan is weak in counter intellegience.....They are do gooders without a strategy for survival!! One cannot be in such mood when the Judiciary, Police, Media, Sultan, Law, education are under the instruction of UMNO-BN Racist.....Its still War until there is freedom of press, religion and from ISA......never forget the Destiny!!

He just quote the requirement of the QURAN, unless you do not respect and practice the QURAN.

Ridhuan Tee has been portraying Islam as a religion of intolerance, promoting hatred and inciting racial tension.
He has stepped up the nonsense to threaten the harmony of ASEAN.

He is more dangerous than Ayah Pin, yet no action has been taken against him while he is allowed to preach the wrong teaching and intolerance in the university and to write on a mainstream newspaper.

Let's vote for Pakatan so that he could be held under ISA for the safety of our nation, and also ASEAN.

The BBC on the Tunisian Revolution and People Power