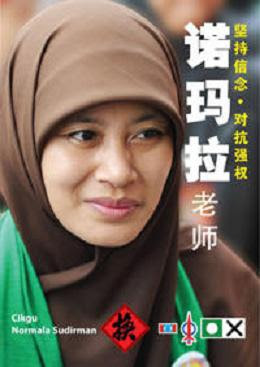 Whilst DPM can kiss his 5000 majority win goodbye, it is still a difficult task for Pakatan to win this by-elections despite Cikgu Mala winning ways swinging votes to PAS and despite DAP’s concerted efforts in the three three Chinese-majority polling districts in the Tenang constituency — Labis, LabisTengah, Labis Timur . DAP must go into top gear and improve on what PAS secured in 2008 — 50 to 67 per cent of the votes. DAP Johor chairman concedes that although they are quite sure of close to 65% there are still areas of fence-sitters.

Pakatan thus far has won the visibility campaign but the last three days must see Pakatan exert more effort and leave nothing to chance, like hoping that those young men and women across the causeway and northern states will come back to vote. The general perception is that since it is near CNY, they will return. But we forget that these young voters are working in Singapore and Singapore’s work culture is different. However, this is another perception. The reality is that they could come back on a Saturday night, vote and get back to Singapore in slightly over 2 hours on Sunday. Coming back from KL too is not an impossible effort.

Pakatan wants to win and they can if they take these must-do non insurmountable steps:

From tonight on and in their ceremahs they must tell the audience to get their absent-voters working outside Tenang thru SMS to come back. Judging from the ceremahs I have attended and their enthusiastic shouts of “Huan” (change) there is no doubt that the majority of Chinese parents are already convinced that the time for change can start at Tenang. So get them to urge their young to return to vote.

It is still not too late for Pakatan to announce a meet the voters session in Singapore….cross the cause way tomorrow night, meet the boys and girls and do their magic. It’s not been done before. There is always a first time. And this may be the time.

JUST DO IT PAKATAN!

THREE CRUCIAL DAYS THAT MIGHT JUST MAKE A DIFFERENCE!

Good idea. This is really thinking out of the box. Go. Pakatan. Go. Go to Singapore.

Dap is just making the racial line bolder and thicker.In the wrong run,the nation suffer.Dap should visit the malay voters and pas spent more time with chineses voters.The demand of chineses school should not be use as bargain for chineses votes as this is markly racial.To fight racialism,we must stop at being racist.The chinese and Indians should ask for more burial grounds.Since land is a sate matter.The pr goverment in penang and selangor must gazatte more land for burial for the non-malays community.If the majority from the malay can die in peace,the non-malays have to worry even in death.
Pr is all talk as it is in the third year and no Adun brought this out for consideration.

Bernard, a very good analysis and suggestion. A win for Pakatan would certainly be a moral booster for the general elections. Are there not enough issues for a Pakatan win? The issues have to be translated into votes!

Charlie, Read my opening para. I am tempted to come to this conclusion that you are capable of reading but have some handicap when it comes to grasping the nuance and comprehending the intended message. I can't help you here as it is an acquired ability...like figuring out this one: Foxtrot Uniform Charlie Kilo Oscar Foxtrot Foxtrot! Have fun.

Don't lah worry about my wasting time....I am having a whale of a time in Segamat and looking forward to Malacca.

Senor, mark my word. Your Mala is finish. Buried by her stupid husband's MC fiasco.
You can call it a day. Save your energy for Merlimau.

Charlie Oscar has been appearing in many blogs as a umno cybertrooper.

Do not take his view seriously. He is paid to do his disgraceful job.

Those Chinese flers will be busy shopping in Singapore for CNY and would not bother to return to Tenang on sunday to vote.