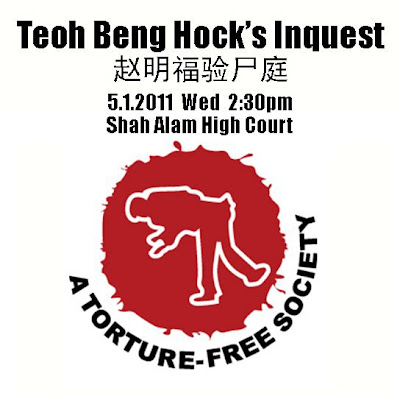 What can one expect from a kangaroo court?

I pray that TBH's spirit will haunt the killer and shadow him daily....let the killer shit in his pants and go mad!!

Then, we will know who the killer is.

I am sure TBH's soul is not at ease and in peace knowing that he died a cruel death and his son is fatherless.

Just a wild guess.. I think the coroner did have a conclusion but is waiting for the word to be approved.. its "MACCINDENTICIDE" - MACC induced accidental death.

what next?
they'll probably say 14-yr-old Aminul 'killed' himself by standing in front of the gun's barrel - just like how Anwar 'beat himself' in jail; like Kugan had an 'asthma attack' although his body was battered and bruised...etc.

“Open Verdict”, what does that mean now?

There definitely was foul play in the death of Teoh Beng Hock so what was holding up at the Inquest? Won't they all along trying to nail "suicide" as the cause?


It's obvious the Coroner failed, deliberately or otherwise to avoid upsetting the evil powers-that-be? What a bloody bunch of incompetent baboons - remember the idiot who tried to demonstrate at the Inquest how easy it was to strangle oneself!!!


Two years on, a waste of tax-payers' money and time and it comes to naught? We now have a DEAD man who is someone else's son, husband, father, brother and friend, found dead whilst in custody of MACC, and it's not murder?

What sort of f*.ing verdict was that!?...it was simply, a bloody waste of tax payers' money to allow incompetent dickheads to conclude the hearing as expected.
Rakyat of Malaysia, if you do not rise up and throw those shit from putrajaya, you will have many more black days to come!

Not suicide, not homicide, not genocide, it's wrongcide - killing because of standing in the wrong side of the political divide.

Wikileaks:-
The Opposition Leader is a manipulated victim of the Cowardice UMNO/BN Leader, who is an implicated Murderer, as he wanted the Opposition Leader to be jailed so that he can win the coming General Election without a stronger opponent thereafter will only continue to oppress the Rakyats with his selfish evil agenda of GST and then to be more corrupted with more projects' announcements so that he will award those projects to his proxies & cronies or try to get more kickbacks from non-proxies if the projects were so awarded say in the same way as the French Submarine's purchase, very soon the Federal Government Coffer will be depleted so that they will have a good reason raise the prices of Diesel and Petrol in order to cheat more money and then Sell more Government Bonds to raise more money to cheat and plunder, don't buy those bonds because they have no money to repay as they have depleted all the Funds contributed from Petronas in the 53 years of UMNO's uninterrupted Corruptions.

Actually, this is what i expected from our highly tainted and immoral jury. The general rakyat must help Teoh's family to fight justice for TBH to the end. We must fight.
Go all out to garner support PKR in the coming bye election/s and GE13.
Only PKR will get to the bottom of this episode including the mongolian woman murder, Kunan death etc.....to name a few.

What the coroner was saying was 'I don't know..' All these at the expense of rakyat's time and money.

best legal minds in the country?

guess the kiasu flers down south are damn right about all the leaders here...

Nope, it's not genocide.

The correct term is:
"MACC-HAS-SOMETHING-TO-HIDE"

I bet 1Malaysian did it!

why do we have to pay so much to the useless so called coroner to sit on his arse for years & years then say not this nor that?

are Malaysians idiots? Perhaps we are

Just admit it, we are a fucking 3rd world country

you no regrets for BN bidding? A young chinese life is just collateral damage? Fornicator Chua, you agree?

IT IS NOT SUICIDE.
IT IS NOT HOMICIDE.
NOT EVEN BACKSIDE.
COULD IT THEN BE FAMICIDE after GENOCIDE
COMMITTED BY PARASITES?
YOU DECIDE !!!

You really have to wonder why the Cabinet itself is trying so darn hard to avoid investigation. Anyone who actually does mostly honest work will tell you that in cases such as this, better to just find the culprit or the truth and let the chips fall. The only reason not to pursue this is because the guilt/implications goes all the way up to the highest level.

TBH death just like PKFZ is politics in this country and the very core of how this country is run – the corruption, the waste, the abuse at the highest level. Its no just a murder case anymore.

Most of us who have been following the political developments in our country closely have hoped for some development to rekindle a 308 like tsunami.

Of particular interests is this: "... democracy index ranks Malaysia 71st out of 167 countries. This represents a slight deterioration compared with the 2008 index, in which Malaysia was ranked 68th."

Are there no honest,right-thinking people in MACC?What about that senior officer who was fond of torture during interrogations?Remember that anonymous letter early on that pointed to him carrying out this criminal deed?Expose him!MACC might just regain a small measure of respect then.

Yeah right...Third World Country with FUCKING Third World Mentality. After all these years, nothing has changed much except on the slippery slide...........! What to expect from all these UMNO goons???

MACCSOCHISM =
1. the tendency to find pleasure in self-denial, submissiveness
2. the act of turning one's destructive tendencies outward towards others
3. graft-ication gained from pain, deprivation, degradation, inflicted or imposed on others

If a RCI is set up and those responsible for the death of THB are punished, then in future nobody will dare to do the dirty jobs for UMNOB because their safety is not guaranteed. This will not benefit UMNOB. Besides, Najib himself has RCI-phobia. Remember the pretty Mongolian lass?

Dear PM Najib, the whole world knows that Teoh Beng Hock was taken to MACC by its officers from Teoh's office. He later died under MACC's custody. MACC is therefore responsible for Teoh's death. It cannot run away from its responsibility. You must punish MACC, or else, you shall be held responsible.

A Big Thank You to KhunYing Pornthip Rojanasunand and to the Thailand govt for their kind help extended in this Teoh Beng Hock case.

Without her help , this case would have closed without knowing the pre fall neck injuries / lacerations suffered by the victim.