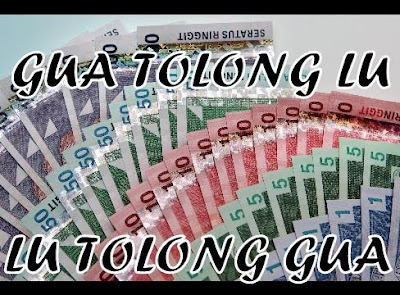 THIS time around the singer is the MCA. They decided that Najib made a mess in Sibu with this infamous one-liner. As such the father, son and some mysterious donor-spirit team want to prove to UMNO that it is more effective if the Chinese sweet-talk the Chinese.

Cloth, milo, cash were generously distributed by recruited locals who lined up for free 1Malaysia tees and some cash. Who donated these goodies? MCA says it is not them. It must have dropped from heaven, looks that way! Dang! I couldn’t make it in time to Labis and an elderly ah soh told me that I missed it by minutes. As I approached another ah soh who had a goody bag in each had and asked for one bag she made a face and said, “boh liau” (no more!). I protested that she had two but she just walked away with her treasures.

Whilst walking towards my car, a group of Chinese ladies were animatedly examining their goody bags. Knowing what those white envelops contained I asked them where they got their “peh kim” from? I knew I embarrassed them as they immediately split, some throwing empty white envelops on the pavement. When Chinese visit a bereaved family they put their donation in a white envelop. This is “peh kim”. OF COURSE I WAS BEING NASTY. NASTINESS BEGETS NASTINESS.

Malaysiakini has the story HERE.

Met up with some Segamat friends over dinner and learnt that the owner of that plot of land on which sits the BN operation complex is richer by RM130,000, Some enterprising people in Merlimau will jostle to close their car-park lots and offer their space to BN.

Obviously, these UMNO bastards think the non-malays are cheapskates...easily bought! It is really amazing 53 years of deceiving by the low down, corrupted UMNO/BN administration, the electorate still fall for such cheap tactics... It is about time, the voters realize Mongolian C4 is a bloody fraud aided by MCA chief, a immoralist sex maniac....

A very disgraceful act of father and son. They are telling the voters that extra-marital affairs is OK and the son accepts his father's folly.

Adultery is a grave sin. It injuries the soul. Beware folks.