WE WANT A ROYAL NOT LOYAL COMMISSION. 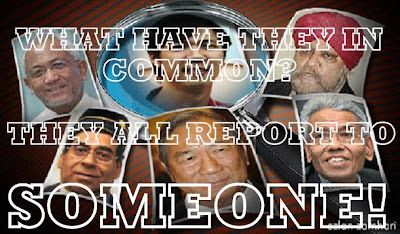 WE HAVE NOT FORGOTTEN THE “ROYAL” COMEDY THAT WAS

THE IPCMC & THE LINGAM TAPES.

some orang cina have problem rolling their tongues for the 'R' ... so it still sound the same same. truth can only reveal when there's change in gomen ... not a letter.

Bro,
We only have and will have "Loyal Commission".

Under the regime rule just to make inteligent rakyat laugh at them.

Is not even the MOOOO DPM is a civil servent also, as long as he hold the post?And how come he can campaign for his party puposes during his office hours.Did he and other ministers take leave to campaign.Who will probe them?

Perhaps the series of Royal comedies can finally bring about some laughter and joy to all those that have been given short shrift with a big push for change in government!

Malai Vengal, an MC is given by a doctor. Professional etiquette does not allow him to divulge the reason (sickness) of his client ailment. A patient does not demand number of days he wants. The doctor decides on that. BN is clutching at the proverbial straw, as they go witch-hunting. Small matter that will not affect the voters.

Charlie boy, we call this being persistent. Perseverance might be milder. After two failed commissions handled by kangaroos, it would be stupid to accept whatever is dished out. That would be crass stupidity,complacency, indifference,ooopppssss I did not mean to insult you...or did I....well if the cap fits, smell it....and
FOXTROT UNIFORM CHARLIE KILO, OSCAR FOXTROT FOXTROT. From your handle I figured you had military background,thus my use of military alphabets above.
Meanwhile, it is free to bising and mintak unless there is a law against it, no? Tunisia is real son!Egypt can be scarry, no? So lets have some semblance of an attempt at good governance if that makes any difference to you!

The outcome will be the same no matter how you call it.

Yesterday the Selangor MB's politically secretary replied to Muhyiddin Yassin's statement asking the MB to step down by saying, "It was a statement not guided by fact or law, and shows shallow intellect. Too bad it was uttered by one who bears the title of deputy prime minister and senior federal minister."

But today Home Minister Hishammuddin outdid his boss and proved that his intellect was even shallower when he said that he had issued an order for the police to investigate PKR de facto leader Anwar's alleged links with international terrorists based on a CNN report which he had not read.

On reading the report one finds that the report had in fact cleared Anwar against a false allegation made against him by Najib and it did not say anything about Anwar being linked with any terrorist group. Since Mahathir Mohamad's time the very top Umno leaders have become pathological liars and will use any crooked method to discredit and eliminate the opposition.

Hi zorro, You choice of words to rebut or chastise guys like Charlie is quite remarkable.

It is election time whether buy/bye election or gearing for the mother of all elections (13th GE) the DUMBNO racists have decided on another Loyal Commission and have appointed some easily malleable and servile sods to the Royal Commission.

It would indeed be a surprise if this commission also DOES NOT go the same was as the Lingam and SPCMC commissions. So long as Najis does not want to be responsible and accountable for the wayward ways of the UMNOputras and bring to book the corrupted culprits, there is no salvation for him as well as his racist government.

The way DPM the cowhead moooheedin has decided to retain Interlok with a few deletions (another whitewash sandiwara) despite the insensitive and malignant writings in the said book only reveals further his ketuanan orang kuala or is it the orang ulu mentality.

This is the same idiotic minister who can't and doesn't have the guts to take action against racist school principals because he is another like them and also does not want to rock his vote bank among the ultra UMNOputra Malays.

When the ordinary Malays wake up from their long slumber and realize how they have been cheated all along by characters like this cowhead and the slimy, dirty, evil father of all racists who does not even recognize his own father's roots, they will dump UMNO and BN to the garbage bin where they belong.

Voting PAS in the Tenang bye-election is better than the munafiqs one finds in UMNO.

It is not PAS is any better with their Islamic and hudud agenda for the country but at least they can't simply bulldoze their somewhat taliban ways in a multi-racial and multi-religious country.

Hope the pariah MIC Indians (as they have been labeled in Interlok) do realize they are not only marginalized in the country but they have been told umpteen times that UMNOputra Malays DO NOT NEED their votes.