SOME MALAYSIANS ARE CHEAPSKATES? 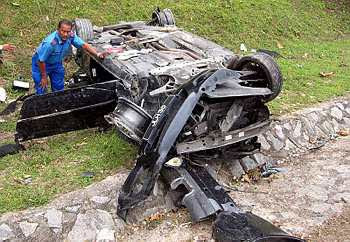 REMBAU, Tuesday: Road-users risked life and limb as they scampered all over to collect loose change strewn along the expressway after a four-wheel-drive vehicle, which was transporting about RM70,000 in coins, overturned near here today.

The incident occurred around 3pm at KM244 of the North-South Expressway and it was learnt that the money, all in coins, was in a large metal container in the vehicle.

Road-users, including women, totally ignored the police and other officials as they ran all over the expressway to pick up the coins.

They were seen frantically picking 50, 20 and 10-sen coins and putting them into plastic bags, pockets and even their helmets.

Some were also seen sitting along the roadside and picking the coins, oblivious of the crash victim who had escaped with light injuries and was just metres away. 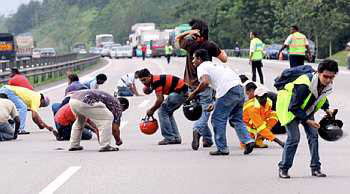 Except for some responsible PLUS employees, it was grab, grab and grab whatever you can! 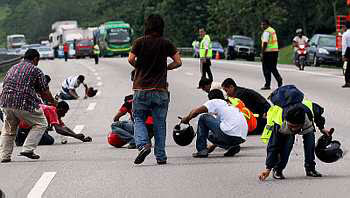 Such was their behavior and throwing caution to the wind.

Can we blame them for taking what is not theirs? 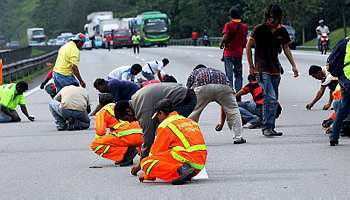 They were merely doing what comes naturally? Monkeys see, monkeys do. 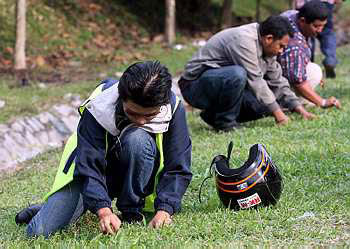 If the BN can grab, why can’t the common man?

If the leaders can bail out their cronies with the rakyat’s money, what’s some coins on the road for the taking?

If the leaders can get away with a bagful of cardinal misdeeds like daylight corruption, what is wrong with collecting those coins?

If the Chief Education Officer in Johor can encourage students to skip classes to campaign in Tenang, it is ok to risk life and limb for a few dollars more.

If land belonging to the people in Sarawak can be taken away to fill Taib’s over-bloated coffers, these collectors were merely doing what their leaders have been doing for some 5 decades…..enriching themselves and their brood with what is not theirs.

Do not our religions say we should not steal?

Should not covet our neighbors goods!

From our teachers, head teachers, and Chief Education Offiers?

Are Malaysians APING their leaders?

ABOUT TIME WE OUST THESE LEADERS!

Tenang may be a good starting point!

Very well said, hope the cyber-troopers report it back to the veto power crazy pm.

There is no law and order as regards to the crime committed as long as you side with them.

Really sick and tired with the EC, PDRM, Judiciary and MACC what a load of crap.

These is the way our leaders lead by example.

Malaysians are surely cheapskates. Just give them a lousy 1malaysia t-shirt and they will vote for BN.

Who are these people and who do they look like ?

Despicable. Mentality tahi kuching. How pariah can one get? And yet you are so right, monkey see, monkey do. Just that the rakyat biase have to make do with dua puloh sen. Or have things really gone so bad back home that an extra 10 ringgit (assuming they can get that much)is worth all this? SIGH.

PS: for a country that likes to criticise Jews and Israel, we sure are hypocritical when it comes to living up ...to stereotypes. :)

This the reflection of our education and values after more than 50 years of independence . Aku malu!

If BN stays in power, a day will come when Malaysians will come out of the vehicles on both sides of the highway to pick up the coins, they will fight each other for that little 5 sen coin that is wedge in the drain-cover .. all this out of the need to survive, not greed!!! You see, Malaysia will be sent back to the pre-historic days when they are too poor to afford anything. The women-folk have to seek work overseas as domestic helpers, etc. while the men or more precisely, the Barisan Nasional and Perkasa men continue to scream ketuanan!!!

This day may come if BN stays in power and we will all weep!

barang naik gomen. everything expensive. what to do. every sen helps..

PM's days are numbered...he has initial stage leukemia...very soon willl go to stage 3 & then 4 and then mampuslah!

such evil PM aka Najis will be hounded by Altantuya and let him mampus soon..

That is precisely what the government of Racist UMNO-BN wants....enrich themselves so that they can be seen as Gods of Gifts and charity to poor rakyat. Look at North Korea.....each time the Comrade Kim Leader visit and give money gifts to the poor.....the whole village thinks they are great Gods. The poorer Malaysian gets the more powerful UMNO racist can use the tools against the rakyat......now you know why continuous Mat Kilau disruption is needed on their infrastructure and tools!!!

Malaysia also in the same boat....apart for the lucky few who still have a life to oppose this regime. Fight we must UMNO-BN racist NARCISSISTIC leaders..

Do you little Mat Kilau anywhere anytime ...the target Cawangan UMNO, EC, Utusan, Balai Police, Judiciary, RTM, MACC.......and show no respect to Sultan. Wonder How many of these Sultans wakes up at 5 am to do Azan.....so called Guardian of Islam...think about it......Munafik!!

To the Hindu happy Thaipusam!!

From the postings I read here, I can see many are passing judgement. I just wonder how many of you ever the done following:

The tone of the whole nation had been set by the ruling party. When there is lack of integrity, sincerity and honesty in the leaders, what do you expect of the followers. Grab.

This is a new and modern-day version of 'Intelock':

Ahmad pays NO TAX, gets a TAX REFUND of RM1,195 [Ah Chong & Muthu contributes towards this lah] and is deem a dutiful tax payers?? and honours his religious obligation.

Are the above calculations correct???

This bring to my mind, how the poor will react when the rich UMNO throw scraps from their table...an act of endearment, no?

Calling Malaysians 'cheapskate' in this instant is not the appropriate choice of word to use, Uncle Z.

What 'actually' will you do if you were there? Taking on the role of directing the traffic so that these people can help themselves to the spill SAFELY?

It is an impulse human nature to react in this situation. Can't blame them, if I am there I will definitely help myself.

Anyway do you know who own these money? CIMB, Bank Rakyat, MB, etc? Peanuts to these bankers, early CNY treat to these finders.

Did I call Malaysians cheapskates?
Or did I ask: SOME MALAYSIANS ARE CHEAPSKATES?

I cannot make it simpler for you, can I.

I RISKED & picked up 9.70, enough for children's ONE week-pocket money !

photos like those Haitians lah, except that they are not black as Haitians black....

true or not that fellar gor lao-kee-mia, waiting time sei-zhore?

why so slow one leh!