I thought my last posting on the Chuas would allow me to go into other issues in the Tenang by-election. I was nasty to that group of ladies in the car park when I referred to the “money” they received in the white envelops as “peh kim”. I took it for granted that the envelops contained money - a widely perceived BN modus operandi. As an after-thought the envelops could have contained a RM50 or RM100 gift voucher. At 11:15pm I was proven wrong!

I sat next to a table of some 8 Chinese customers at Kumpung Café just off Jalan Segamat. I heard this remark: “His tee-shirt is better than ours”. I was wearing our Barisan Rakyat/MCLM tees. I asked them why was my tees better. I then noticed that each had a tee beside their drinks. One of them showed me their white tees. It was the familiar 1Malaysia tees which they were told to wear for a few hours and RM100 was theirs. They were spending their reward after fulfilling the condition and was now in their regular attire. I also elicited from them that none of them were voting in Tenang.

Dang! The Chuas are desperate. Labis is their fortress and they will not lose if without a fight, fair or otherwise. I was just wondering where the money for the thousands of tees came from? Real “chua” this father and son combo! The father will press on about voting PAS means agreeing to an Islamic state and the son has backtracked about the sale of alcohol.

What next from the Chuas? 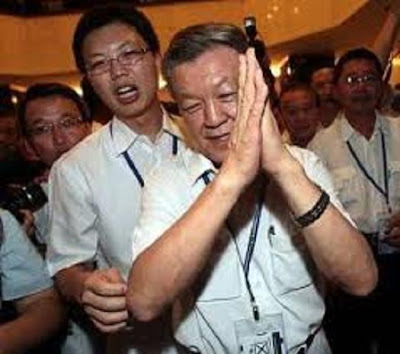 Will they quizzically look to their Masters and ask, “…yes what next….quick.”

Will the Chinese in Tenang slither their way to the polling booth on the 30Jan. to support the BN candidate or will they give two tight slaps to the Chuas and vote for Mala?

No telling really...but one thing for sure..the Chinese in the PR crowd on Nomination Day were locals who wore ordinary, everyday dress and comfortable with the PAS supporters whereas the Chinese in the BN crowd were imported, wear fancy uniforms with branded accessories and did not mingle with the UMNO supporters.

Great effort,but bn will still win this one.We cannot win by selling hate alone.By reduculing mca supporters[who are also voters]we alienate them.
Dap should not be too loud with their poster as Pas is fielding the candidate and the passive malays may construed this as Dap arrogance and a display to dominate.More malays will turn to bn for that.

Someday you will understand ?

only slave dogs would want an immoral man who screwe his whore in some sleazy hotels to be their pariahsident.

A great father and son team doing a "69"....licking each others a*** for a shiok sendiri session.

bloody philanderer. go bonk her but dont you ever say you represent chinese. I dont need a freaking immoral fucker representing me. heard your son is following your footsteps. Go ahead with your bonking.

PR & MCLM please campaign door to door highlight more issues not just price rise. Try to understand why these chinese/Indian still want to suck up with racist UMNO. Tell them don't complain anymore if they are happy and continue to support this corrupt regime!!

But none goes to the rakyat!!!

Trusting the father & son to represent the chinese is like asking the fox to guard the chicken coop.

Likewise the little chua is guarding the MCA's strongroom of over 2 billion and the main actor acts as director too.

What a good tagteam indeed. If anyone believes what they said, please trust that all grandmothers out there are still a virgin, ya.

The Chuas know from first hand experience that MONEY comes first to the MCA Chinese, UMNOputras and the MIC Indians classified as paraiah.

But make sure to wear it inside out!

Can you post the hotel videoclip of CSL taking off his pants?

Those Tenang aunties are dying to see.

Dr Chua Soi Lek should disclose which state has the highest water rates in the country if not Johor and take full responsibility for the failure of the MCA state executive councillor in-charge of water services, Tan Kok Hong to protect the interest of Johoreans

In a Bernama report, Dr Chua Soi Lek denied the fact that the water tariffs in Johor were the highest in the country.