Two Saturday ago, on 23January I spent a most rewarding afternoon at the Kuala Lumpur-Selangor Chinese Assembly Hall participating at our ANAK BANGSA MALAYSIA, Klang Valley Roadshow. 200 registered but it attracted another 100 odd participants. I was particularly thrilled by the good age-mix of the participants but remarked that the ethnic-mix could be better. The speakers were awesome and did captivate the attention of the audience. The program was well orchestrated such that in between speakers the participants were suitably entertained. But most of all it DID NOT involve any politicians. A dang good show I tell you. To maintain the tempo the Anak Bangsa Malaysia team will head north to IPOH this Saturday 6February.

February 6 2009 was the day the BN Government usurped, of course, unconstitutionally, the State of Perak. It was a take-over most foul. But the above ABM roadshow was not organised as a protest. It is purely co-incidental. However, the participation of Perakians will give an indication as to what they want next. I have blogged extensively about the 2009 debacle. Most Perakians registered their disgust at the takeover and mostly all say that they will show the usurpers at the next GE. I say to these: Just don't talk about what you can do! DO IT, attend the roadshow and get your friends there. The number of participants will be a good indicator to gauge if Perakians seriously want back their state or just talk about it! 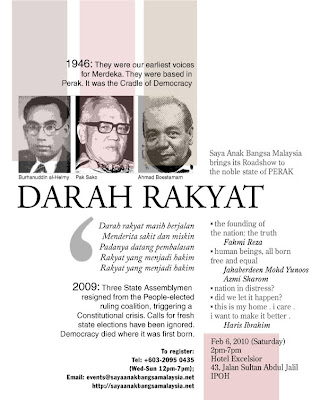 PLS CLICK ON IMAGE FOR PREFERRED VISIBILITY
Posted by zorro at 8:07 PM

sorry, may i know the venue and time?thanks!

Dear Zorro,
Politiking again!!!
When the Bota YB crossed over to PR (Pembangkang Rakyat), he was a HERO!!!
When the "3 Kataks" chose to be Independent, they are traitors!!!
Which side has the Majority in the State Assembly???
The NUMBERS are there to be COUNTED!!!
Perakians are more interested in moving on than Sandiwara/Politiking!!!
It is a good thing that you used the words, Most & Mostly Perakians in your blog!!!
The MAJORITY of Perakians can only be guaged in GE13!!!
We Must support whichever Gomen is doing Good for the Rakyat of Perak!!!

Wonderful focus and commitment to positive change. So proud of Haris and all who are helping the SABM movement!

a) Most - 1.greatest in quantity, extent or degree 2.the majority of (most people)
b) Mostly - for the greatest part (synonymous to - mainly)

Which part of most and/or mostly did you not understand?

And why wait for GE13 when a Perak state snap election will settle the score once and for all (Perakians - pun intended) sans interference from irrelevant quarters?

That dickhead mamak the "ZOMBIE" talks like a coward again. Why should only Pakatan representatives quit? All assemblypersons, including Barisan representatives and those greedy no shame frogs who left their parties, should quit. Do what Mohammad Nizar Jamaluddin had dared, and wanted, to do but was denied by the Sultan at the prodding of BN. Mamak the "ZOMBIE"only knows how to talk big and hide behind his UMNO master Mr. C4. The rakyat from Perak is sick of you esp your golliwog cunning look. Just piss off Perak for good before they kick your big fat black arse out come GE13.