WAS on my way to land some fish after some excellent lamb shanks, last night. But it was not to be as I was alerted that our biggest carpark (The Federal Highway) was choc-a-blok. So the saner bet was to head for Sid's. After a scandalous amount of flavored guiness the consensus was yes......shitty days are here again. But I insisted that shit is not that bad, being the most FUNCTIONAL word in English....unlike the more common man's  smutty Fly Uncle Charlie's Kite.

Consider:
You can get shit-faced, be shit-out-of-luck, Or have shit for brains.

With a little effort, you can get your shit together, find a place for your shit, or be asked to shit or get off the pot.

Some people know their shit, while others can't tell the difference
between shit and cineole.

There are lucky shits, dumb shits, and crazy shits. There is bull shit, horse shit, and chicken shit.

You can throw shit, sling shit, catch shit, shoot the shit, or duck when the shit hits the fan.

You can give a shit or serve shit on a shingle.

You can find yourself in deep shit or be happier than a pig in shit.

You can have too much shit, not enough shit, the right shit, the wrong shit or a lot of weird shit.

You can carry shit, have a mountain of shit, or find yourself up shit creek without a paddle.

Sometimes everything you touch turns to shit and other times you fall in a bucket of shit and come out smelling like a rose.


When you stop to consider all the facts, it's the basic building block of the English language.

And remember, once you know your shit, you don't need to know anything else!!

You could pass this along, if you give a shit; or not do so if you don't give a shit! 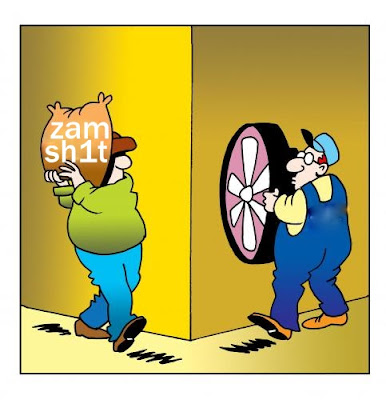 DANG! I AM RUNNING LATE FOR BAK KUT TEH DATE WITH TERRENCE N.

Yoh.....it is shitty indeed as Terrence N asserts in his piece:


‘It's the kind of reasoning that makes you think that the law is an ass.’
HERE
Posted by zorro at 9:48 AM

khoo, you are one moron full of shit! more you talk, more shits out from your scull.

Uncle Zorro, we all know what an impact against democracy the Fed court's decision will have on Malaysia. The game now is whoever can buy over delegates will have the upper hand to run the states or nation. Those undated letters of resignation by party delegates are of no effect anymore.

This will open the floodgate of crossover as the ruling regime is bent on buying more to pass laws to their whims and fancy. It will create a chaotic scene and no FDI will ever come near again. So people, be very wise with your savings as tough times are ahead as this nation continues to spiral down hill with " No Brakes On."

some can hold d shit for a couple of days.

Not forgetting that there is also "Your lordshits" who preside over the court.

I hope Nazrin will continue with a holiday in the Alps and stopping talking cock to his subjects from on!!!

It is the court that decides and not the law.So who are the shits that learn to trust the law,when at all times the court decide[ie shitheads sitting on the bench]

On susan`s blog a notoriously obnoxious character is shat on:

OI!!!!! IDIOT DON`T TRY TO TAKE THE CREDIT
I TOLD YOU THAT FIRST, FISHFOOD
NOW YOU KNOW YOU ARE

Scoundrels, crooks, cheats and all similiar assorted species have a common characteristic too: offended by a descriptive word that describe their acts:
S-H-I-T.

What is the basic difference?

One is offended by the act that is inherently unjust.

The other is offended by the 'rude' word that describes the unjust act.

Thus demonstrating the age-old paradox: strain a tick and swallow an elephant.

All will be laced with legalistic jargons to justify behaviours and decisions that are condemned by all who want a decent human life for themselves and their children.

Decent human beings know what is right and what is wrong. They do not need crooks to lecture to them. Worse to impose ridiculous standards on them!

Shame on the those who do not want to promote decency for the nation!

Anonymous @ 7.30pm, Monsterball, the hideous specimen is rabidly jealous of Zorro because the later is far more capable than himself.

malaysia is beautiful country, the people are warm friendly and common sense prevail at every corner of the country. just because some fellas can hold shits for couple days without shitting, now the whole country population have to suffer. now the country indeed in deep shit!

sadly everyone in the country who these shitty people are and cant do nothing, but smell shit.