GET WELL SOON YAH, BOTH OF YOU. 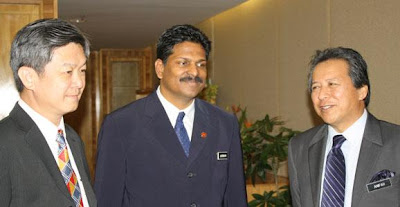 Deputies Lee Chee Leong, Kohilan Pillay and Anifah Hj Aman
Last night the Foreign Affairs Minister, met up with the Ambassador of the European Union. This morning he was admittedly admited into IJN. What the EU guy said to Anifah is not known yet as the MSM is mum about this. But our sources at IJN says that he is resting comfortably. Get well soon as you need to find out what happened in Washington DC over the "off-the-record" CSIS closed door seminar.

Our sources revealed that Saiful too is indisposed. A bout of loose bowels has floored him after intensive coaching by his minders in preparation for his impending duel with the Lion of Jelutong. When that starts, we are told that a mobile jamban will be made available as the unrecusable judge will not allow any more postponement. But why he is put in the same room withe Minister remains quite a mystery. 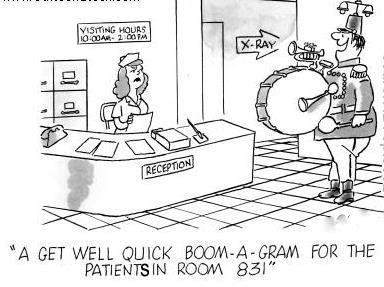 Uncle Bernard, you really floored me with this posting...lol...sorry I need to go and loosen up myself....

Zorro, who was that fellow from India, a journalist who came to Malaysia and spoke (about Washington circus, 3 clowns, freemalaysiatoday.com but can't find the post now, extremely funny) and said, what it to really hurt, makes it funny. I think you are almost his equal.

Dear Patriot,
You can find the gem you're looking for here:
http://www.malaysia-today.net/index.php?option=com_content&view=article&id=30354:three-blind-mice-to-washington-went-&catid=17:guest-columnists&Itemid=100130

Dear Zorro,
GOD must have told Anifah and the Malaysian wonder of a Rafflesia about where it would hurt most for their crimes.
Cheers to you Zorro for that apt comic!!

I think it is time's up for that Anifart.

God is calling home one by one these wicked human-looking animals in the BN/UMNO animal farm!

Commercial note: A new version of this premium item is currently being tested on a secret location on the baddest lab test animal available - an UMNO Baru politician.

b) A complete psychiatric evaluation for schizophrenic tendencies on the testee over 5 years or by the next general election or, in the event of death occuring within these stipulated period, a) will apply.

c) Testor's death (which may occur due to a blow-back condition) will however be considered as a failed experiment whereby the entire process will be repeated after a Royal Commission of Inquiry has found the facts through a triple-correction formulae unique to Malaysia.

Business proposal: The sole proprietor of SaifulButtMagic@ is prepared to sell the entire company and its products for the sum of ONE EURO which includes the purchaser assuming full responsibility on RM500 million in liabilities. Interested parties, irrespective of gender, race and/or religious affiliations, are encouraged to apply. And quickly please.

Malaysia is infamous for a lot of things of late. But this shit by the name of Sai trumps them all. Holy Shit. Fucking Shit. Sai ka liow (which means shit all over).

NEVER TOO SOON FOR HIGH NOON

When the bad karma of bad people ripens, bad things happen to them. All the money in the world will not be able to save them. Those who have done ill unto others must pay for their sins.

This country has the wealth to satisfy the needs of all citizens and the 'pendatangs', but does not have enough to satisfy the greed of one citizen who has been empowered by the people.Ramalx

This bugger refused to accept a deputy ministers post and BN worried about the effect on Sabah finally relented and gave him a full minister post. He will sell his mother to be a minister..so what kind of shit you think he is.

I am one of the many victims of Ooi Boon Leong, the former director of MEMS TECHNOLOGY BERHAD who was convicted with his CFO, both who were convicted at the Sessions Court on 25th February.

The funny thing is that there was a Star Online article on the conviction, the same article NEVER made in to the Star proper !

There is a pattern here. In April 2009, the same 2 directors were reported be charged and reported
in the Star Online and amazing enough, it also was not published in the Star proper.

One wonders whether the editors at the Star were persuaded not to do so with an incentive. BTW, I had alerted Datuk Wong Chun Wai via his New Malaysia Blog but he chose not to publish this alert of mine. Wong Chun Wai is a Penang Lang and so is OBL... Is there a connection ? I think OTK must know about this abomination.

Ooi Boon Leong, 49, was a director and an audit committee member of MEMS Technology Bhd while Tan Yeow Teck, 49, was its chief financial officer and an executive director.

In sentencing, Sessions Court judge Asmadi Hussin ordered each accused to pay his fine or serve two years in jail.

The two were said to have knowingly authorised the furnishing of a misleading statement to Bursa Malaysia Securities Bhd in Bukit Kewangan on Sept 27, 2007.

Upon hearing their verdict, the two, who had resigned from their posts, were composed.

Pleading for leniency, their lawyer Francis Ng Aik Guan asked the court to consider that his clients had already been publicly reprimanded and fined by Bursa Malaysia for overlapping breaches pertaining to the same unaudited accounts for that financial year.

He said both would be disqualified from holding directors’ positions upon their conviction, which would also affect their livelihood.

He said his clients were remorseful over their actions and had sincerely recorded their plea of guilt.

He asked the court to consider that his clients had contributed for the growth of the nation and to transfer of technology through their roles in the company.

In pressing for a deterrent sentence, prosecuting officer Shanti Geoffrey asked the court to consider public interest and the seriousness of the offence.

“Investors were misled with a statement issued to Bursa Malaysia on Sept 27, 2007, which was approved by both accused.

“In the false statement, out of RM73,416mil recorded for revenue, RM30,169mil worth of sales did not take place. The false sales comprised 41% of the overall revenue,” she said.

Geoffrey said investors were misled and suffered losses due to the false information, while both accused enjoyed revenue from their wrongful actions.

She said that Ooi was a substantial shareholder in MEMS Technology with over 38 million shares while Tan held 270,800 shares.

She said it was a planned crime where both accused had took about a year to generate and insert false sales in the accounts of its subsidiary company.

“Both are qualified accountants, they knew very well what they were doing,”she said, adding that elements of forgery and cheating were involved in committing the offence.

She said both accused had also failed to carry out their duty to shareholders and that their actions had affected the confidence of investors in the company.