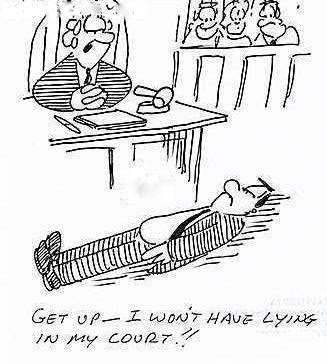 really?
CAN LIE STORY HERE
Posted by zorro at 8:59 PM

karpal should focus on grilling the saiful instead of the judge. It's trivial and very weak argument.

Perhaps karpal is more fearful of backfire while grilling saiful, which is the core of the matter.
People are waiting, karpal!!! Don't change the subject

Recusing the judge is not going to make anwar appear more innocent.

It's too obvious anwar is buying time to spin a new lie over the previous lies. Karpal has nothing to break saiful.

Karpal can always defer cross examining Saiful until the prosecution has tendered more witnesses and evidence.

So, Karpal doesn't HAVE to "buy" any time by going after the judge to recuse himself!

Dpp,
your point is as weak as karpal's affidavit on the judge.

You're delaying justice for anwar. The sooner saiful is broken down, the sooner anwar gets his acquital, the sooner PR can strengthen the coalition.

Public is not interested to hear trivial matters on the judge.
Public wants to disect this saiful.

We want this Sodomy II to be done, finito!

But I do know something for sure. The international front is watching Malaysia. Will they still wanna dump their $$$ here????

"Public is not interested to hear trivial matters on the judge."

An "unfair" or "lying" judge is a trivial matter?
Then we might as well shut down all the courts in the country, and appoint BN appointees to dispense "BN" justice.

No one trust the judiciary and that is the real issue.
If a judge can lie so what is the point of having the trial.....
Wow.. gila meh ini Malaysia!!!.

"Public wants to disect this saiful."


Dissect him until the world ends, but under DNA Law that was rushed in Parliament by najib before the case began, the Judge has NO option but to pronounce Anwar guilty.

THIS IS BOLEHLAND...MONKEY JUDGES PERFORMING THEIR BEST ACT..."JUDGE IS NOT TELLING THE TRUTH...HOW TO JUDGE A JUDGE"

Umno Information Chief Datuk Ahmad Maslan says would just turn a deaf ear to the accusations.cos we are the law in Malaysia

We have no malicious intent toward anyone, at least not to those who support our support for the beloved UMNO government. The malice might be present, but we have no intent to be malicious, we are instructed to do so, only.
http://malaysiaonlinetoday.wordpress.com/2010/02/10/umno-information-chief-datuk-ahmad-maslan-says-would-just-turn-a-deaf-ear-to-the-accusations-cos-we-are-the-law-in-malaysia-ketuanan-melayu/

Karpal Singh is right, he has to settle that part to disqualify the biased and corrupt before continuing with the case proper.

Of course everyone is fedup, I am fedup too with with this re-make of "Sodomy I". With the judiciary not independent; it may not make much difference by disqualifying the biased judge but what needs to be done must be done to expose the wrong-doers and stop them at their evil tracks.

The Judge just sleeping - frm your cartoon.( I assume only)
The defence lawyer as usual will find a way to protect his client.

rajraman666.Mind boggling for me-Since when the prosecuting attorney can defence the "JUDGE"? ( I think the judge will like this guy ).
CASED CLOSED - Human race are racial but don't be racist.
bye2 and thank u.

If a judge LIES, do you think he is doing JUSTICE? MY FOOT or rather SEPOL'S ASS!

It appears that it was karpal that LIED and he need to apologize to utusan as dpp has proven in court.

Karpal should recuse himself for being a politician instead of a lawyer in court. Hahaha!

So what other technicality for karpal to think about to delay the process of justice?

He did not lie, he just didn't tell the truth!

From day one, nobody trust those clowns in the Malaysian judiciary. They are replicas of their Umno masters esp like that racialistic bum chief Ahd M. Right from the start their pea-brains have registered "guilty" irrespective.
This is justice in Bolehland.

Every one is clear we have a lot of problem and sickness and clearly no one have a decent solutuion,except harping on GE13[The very machanism the politicans puts us in fetters in the first place.] The solution for healing is within the scriptures of every single religions.I will gladly go to hell if this is not the Truth.