courtesy of APCO and

On February 24, Center for Strategic and International Studies based in will host several representatives of the UMNO ruling party for a “seminar” on Governance and the Rule of Law in Malaysia & Malaysian Legislative Initiatives. The program is as follows according to an email I received from CSIS Senior Advisor for Southeast Asia Ernie Bower (Partner at BrooksBowerAsia).
As an aside I have met Ernie and found him to be a reasonable person just trying to make a dollar in , but  I am somewhat surprised that even he would stoop so low as to share a stage with this group.  In 2004 there is a statement attributed to him “Though [Ernie] Bower and [Karen] Brooks are close to many ASEAN leaders, they said they would not act as a lobby group or as “agents” for Southeast Asian governments in . That’s obviously not true.
Here is a copy of the email: 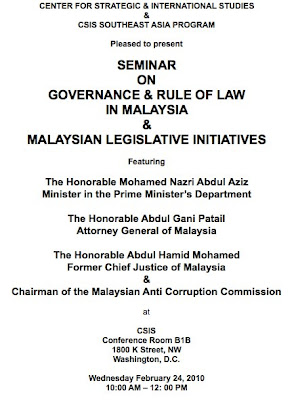 Those of you who wish to attend, or register a protest, please send an email to SoutheastAsia@csis.org
or call Mary Beth Whyel at +12027753278. Don’t abuse her though…she’s just the messenger.
The invite says “CSIS Malaysia is honored to invite you to a presentation and discussion with a panel of leading Malaysian officials with the responsibility for the legislative agenda, parliamentary affairs, governance, rule of law and anti-corruption initiatives in .”
Of course its nothing new for think tanks to be used by lobbyists for political stunts like this. [Read this article on Democracy Now] This is what companies like APCO promise when they receive contacts in the amount of RM 20 million. They promise to place your client in prominent speaking venues in and get you meetings with key political figures.
So on this trip we should not be surprised that Nazri, Gani and Abdul Hamid will try to pay calls on Capitol Hill to Senator John Kerry, Congressman Richard Berman, and whoever else is willing to open their doors to these groveling dogs.
If they were sent to talk about rule of law and governance then the topic of their lecture should be the the decreipt condition of Malaysia’s judiciary starting with the 1988 Crisis, followed by the handling of Anwar IBrahims 1998 trial and then the most embarrassing incident of the VK Lingam tape, which led to the findings of a Royal Commission confirming that there is political and corporate interference in the appointment of judges and decision of cases.
They should admit that nothing has been done to restore confidence in the system and some paltry reforms that have been made are inconsequential.  They should talk about how corporations in prefer to have their disputes resolved in or courts. They should talk about Perak and the illegal overthrow of a democratically elected government.
Instead, these individuals will talk about the Judicial Appointments Commission and the revised MACC laws passed a year ago. They will pat themselves on the back for three minutes and then immediately start their barrage of attacks on Anwar Ibrahim, who they will say is being tried under the laws of and will be given a fair trial.
I am all for free speech and the Malaysian government should be allowed to represent its position. But to send government officials to basically go lobby on behalf of Saiful Bukhari is pretty pathetic. I don’t think it’s a good use of taxpayer dollars and I do think it makes a further mockery of our government and the elected officials in the Barisan Nasional.
APCO, I’m very disappointed. You’ve been at it for a year now. And this is all you have to show for it?  By the end of 2010 it is a fact that the nail will be hammered into the coffin of 1Malaysia. Najib will continue to cower in front of foreign media over his inability to answer questions about caning, church bombings, murdered Mongolians, submarines that don’t sink, 2 missing jet-engines and  Anwar’s trial.  ’s reputation will continue to sink and slide, money will continue to leave the country and Malaysians will continue to migrate overseas.
And the best you can do is send Gani Patail to talk about the Rule of Law? Really?  You sent the former head of the MACC to talk about anti-corruption the same week that the autopsy of Teoh Beng Hock is being released?  Why don’t you send Musa Hasan as well to talk about how crime rates have increased geometrically in the last decade and prisoners are routinely killed and abused while in custody? And maybe throw in a few officials involved in human trafficking?  Do you think the Americans are that dumb to not see through this charade?
And then to top it off you have JJ (Jamaludin Jaris) there as well. The racist, butt pinching representative of the Malaysian people in .
Right now ’s foreign policy consists of one thing and one thing only and that is demonising Anwar Ibrahim and spending as much money as they can to compete with his strong international networking. It’s not a surprise that MPs and politicians around the world with a shred of credibility are speaking out in his favour. He has cultivated strong relationships over the last three decades premised on a commitment to some basic principles of good governance, pluralism and democracy.
I look forward to hearing back from my friends in  how this event goes. I expect  US media to be present and to grill these clowns. I expect friends and supporters of Anwar Ibrahim, KeADILan and Pakatan Rakyat to be present and show strength. I don’t expect anyone in the policy making establishment to take this delegation seriously. I expect CSIS to make some easy money in hosting this event. And we’ll be laughed at even more as the useless trial to incarcerate Anwar Ibrahim slogs on.
Posted by zorro at 9:13 AM

Is Najib sending these three stooges to Washington using our money again? I hope the Americans issue them green card so that they stay there for good. I'm sure their circuses there can do with more clowns.

Those jerks will not go anywhere!!!
If they think Americans are idiot then so sorry that the effort initiated by the "raba raba'' guy will be a laughing stock and another humiliation to Malaysia.
So how much money these idiot spent for the trip!!! It is rakyat money!!! poraaah..... raba raba!!!

Why the need to explain if everything is above board?

Of all places, USA - a country which our politicians despise now and again, especially if their politicians spoke highly or in favour of Anwar Ibrahim.

Waste of taxpayers' money... any other country lined up for the roadshow by our patronizing leaders and our ever powerful AG?

The US today is a very sad place and its best friends are dictators. Even the Dalai Lama on a recent visit had to leave the White House by the back door. The US cannot be trusted.

Those Americans sometimes need to be educated on how other people do their things. Unlike Australia where the kangaroo court originates, we do not want a new term like orang utan courts added to our vocabulary.

More crucial it will give them a better picture from the government side as opposed to anwar's global spin, without much facts.

So, they have to bluff more with their road show in USA. Hi. American we in Malaysia have been fooled again and again now this three Malaysian think it about time to fool you.

I supposed if you really want to get your message across you may have to rewrite your article into a more simple English form. Do not expect too much from them when they cant even come out with a proper English banner during their protests

These hypocrites are well paid to go for endless holidays then come back to screw Malaysians , again and again
and we take it cool then wait 5 more years only wat

DUMNO WILL DO WHATEVER IT TAKES TO REMAIN IN CONTROL OF MALAYSIA WEALTH, EVEN IF TAKES TO DUMB THEMSELVES GLOBALLY.

still, sad to see they wasting our taxpayers money$.

Wonder whose money anwar used to fly around the world for his roadshows & lobby.
Did he save up all his TPM salary, last paid sept 98?
Or was it Malaysia taxpayer money.
Or US citizens taxpayer money.?

Anon209am....you poor thing...still haven't got rid of your nightmares about AI? Try inhaling clorox before sleeping. "Or was it Malaysia taxpayer money...." gee, I think you are a gonner...inhaling wont help...drink it..that's fast-tracking.

I have RSVP-ed to attend the event. Will keep you guys posted on "what happened" and "what was said and asked", etc. if you are interested.

Anon 2.09am
Perhaps it is from Dentist Toyo 's private practise income, no?

Jinn, you are god-sent. We will definitely welcome your report of the event....a you-tube of the event would be welcomed. Email me, yah? Thanks in advance Jinn.

no harm in seminar such as this, yea Jinn, I envy u for being there. Do keep us update.

I am proud of Malaysia and I am sure the government will handle this brilliantly. Make us proud Malaysia.

Why are you scare to allow my posting. No balls ah Apek! Pity you never feel grateful. What does your tuhan alla taught you? Postong hate messages. Is Jesus that type of human or mini god as you believe?

Anak pp: I am posting your comment because I want my readers to know the bangsat quality of the comments you make. I did not do it previously to save you the embarrassment which will be coming your way.....just be prepared.

anak permatang pauh, I'm not here to defend Zorro...he can hold his own quiet well, but you... you poor sod. Zorro's allah taught him to have patience with vermins like you bro....i.e. If you really are a guy with balls. Why a nick and not a pic with name bro ? You come out using the holy name of Jesus with hate. Why ? Don't you believe in Him ? Is it not written in the koran and preached by Mohamad that to be a true muslim you have to believe all prophets before him, from Adam to Isa ! Now you being a simpleton won't be able to comprehend between Isa and Jesus, yes ? very sad indeed moron....now crawl back to that cess pool you emerged from....and stay there you racist/bigot .
And Bernard just ignore this idiot next time he makes a sly cyber-appearance here, ok ?

I think APP is that new type of cyber-trooper from a recently launched right-wing malay NGO.

Don't bother publishing their drivel coz, then, they can't claim their wang ihsan from dubious paymasters for services unfulfilled.

Btw didja hear about a Facebook expose on a conspiracy plan between Saiful and Papa Gomo?