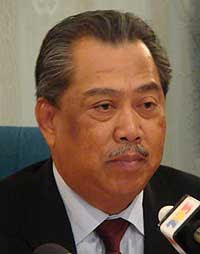 I remember my late PA often telling us: When you have nothing worthwhile to say, just shut up.

It is not that the DPM has much to say, he has to say things to do damage control. He is perceived to have said things contrary to 1Malaysia and mama isn't very pleased.

What did he say:

"Long-established institutions such as the police, the judiciary, the
Malaysian Anti-Corruption Commission and economic institutions, which have been well received, are being disputed by them," he said at a public rally at Taman Sri Liam, Ulu Yam Baharu in Hulu Selangor last night.

Moo can only assert most presumptuously everytime ; I haven't heard him say anything that's profound enough to make any (good)impression on himself.

You are in Hulu Selangor, right and I am taking you out of topic for awhile, that is if you don't mind.

We are working on our Malayan Tiger, ie: Pak Belang, which presently +-500 in the wild. Therefore, the Tiger Blogfest 2010.

Any tiger stories or jokes just to get out of busy campaigning ???

All the best anyway.

PS**
We have common friend Alfred Hendroft, can you confirm. If not sorry.

mr Moo, rpk nids help. can u pls confirm if ur mr kamal did go to tis Edith Cowan University and was awarded a Bachelor of Mass Communication ... or could he be awarded bachelor of Mass Destruction?

The campaign by umno had being turned into slandering and character assassination. Drinking and gambling are the moral issues that they hit at Zaid Ibrahim without realising that most of umno' ministers, MP and adun were also at one time or another connected to these immoral acts.

A Perakian commented that Perak should emulate Selangor State - If there are no deserving Perakians to confer the title to, then should not have done it!

Pathetically unrealistic on whatever he said! Shameful and downright pitiful to have a DPM of his calibre in this beautiful country! Guess either they refused to wake up to face reality or in true essence, a leopard will never change its spots. Just don't waste time with these UMNO goons!

Muhyuddin Yasin - not fit to be a minister what not the TPM of Malaysia. God help us.

What do you expect with a guy with cow mentality???? Whenever he opens his foul mouth, cowdang comes out.
It is amazing that he is a DPM with credentials so so low.
Oooppps.. this is UMNO.
Actually most of the rakyat have already ignore this moooooooo....
Lets move on and dont forget to vote ZAID/PKR!!!!!!

That dpm is indeed a fool.

this moohidin's face is so scary. like a dead man's face....