STAY WHERE YOU ARE PETE. I RATHER YOU BE A LIVE COWARD (which you aren't) THAN AN INCARCERATED HERO. 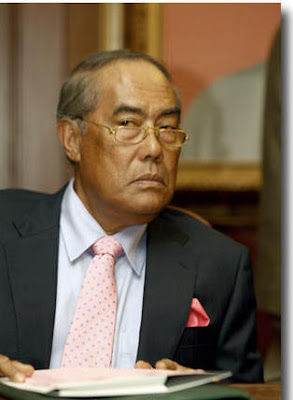 LAST week former MP of Subang KS Nijar promised Pete that he can arrange for him to come back to defend himself.(HERE) I thought Karnail Singh Nijar was pathetic and I sent him running along with an over-powering Punjabi curse word.

And yesterday, I read HERE  and HERE that my friend Tan Sri Megat Najmuddin Khas also lent his voice to kind of entice RPK to come home, using the buddy-buddy MCKK comrade call. Who next? Najib or the First Woman?

The buddy-buddy call of an elder brother is ok, but asking how Pete could support himself overseas being a declared bankrupt has negated that buddy-buddy overture.

I never expected Megat to use that line. I have in the 70s partied with Megat when he was spouseless in Section 12 and was a partner with my late nephew Danny Teoh. I followed his meteoric rise and offered him my house for his last ceremah when he stood as my (UMNO) Adun in Kelana Jaya. Thence I could not catch up with his jetset-pace except when he urged me to have a last cuppa at Castell around 2am. I last congratulated him when he won the Presidency of the Subang Golf Club.

Yesterday, I was prepared to do a post on this but an ultimatum from Hantu II resulted in a deferment. But now that Pete has posted a reply HERE, my piece would be insignificant and obsolete.


Yes, Pete stay where you are but do warn us when you stray too far.  Whilst you are in the Steppes of Ulaanbaator, Hantu advises  you visit Terelj Hotel Cigar Lounge where you can exchange anecdotes with other cigar lovers from around the world in this quiet hideaway, or step out onto the balcony to take in the clear mountain air and majesty of the Terelj National Park. You would enjoy the  rich, velvets and comfortable, dark furnishings, This Cigar Lounge kinda forces you to relax in elegance and timeless style.  An endless selection of cognacs and whiskeys may even distract you from your two companions.

You are in your element when you write like this , philosophical and in the tone of an exceedingly wise man ! Tho your untold close association with those true democracy people in blue or whatnot might actually harm your this god given wisdom , I fear. So take care, for your greatest enemy is more often than not the one closest to you when you are strong and high , or when you think you are

played out more than once

This "man" who sits on thousands of gaji buta commissions and boards and his wife and children should all spend a couple of years in Kamunting courtesy of HRH Perak.

Then he can exchange and share notes with RPK on how Kamunting is really another Club Med and what a delightful place it is to spend one's free time in and cope easily with life and all its vicissitudes as afforded by the 1 Nation Government!

So, it's now war between 'friends'?

What's the world coming to?

Stay stoic and get curious, Bernard!

They were baiting and my opinion is RPK bit. Now they know where he is. Sigh!!

Hey Zorro,
RPK's son is taken for a PDRM ride.Can we organise some bail etc. to stop this nonsense? Get the right lawyers and let's move man. the least we can do for RPK.
Major.

RETREAT SO AS TO ADVANCE

Osama Bin Laden goes hiding and noboby calls him coward. In fact many revere him as hero.

RPK you are not a coward. The cowards are the ones who uses all dirty and cruel means to stay in power.

They are now using sympathetic means to lure you out - I'm sure you know this. In other words, they really fear and shitting in their pants because of you. Imagine the whole machinery of the country are used against ONE man.

friend or no friend, no money$ no talk mah. this Megat fella is UMNO top fella too, and knowing UMNO, he must be as loaded as the Toyol fella, probably more loaded too mah.

RPK is mou-qin-yan person lah compared to this Megat fella. of course, more castles palaces and bentleys maybachs included if he secure RPK in his compund mah...

Come back and be subjected to Kangaroo justice? Hey, that's not funny.

RPK would have a better chance in Zimbabwe.