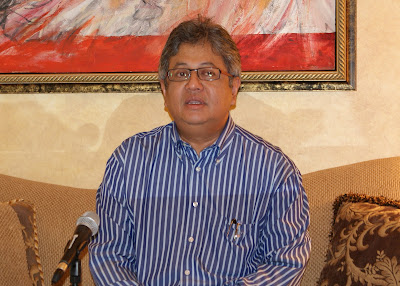 No there was no rumble, nobody tumbled, nobody got humbled, though some might grumble that someone fumbled! Zaid just needed to be away from  the thick of things for the next 6 months to do his thing – “to provide a cohesive foundation for the coalition and this involves meeting various leaders” ……”and with the Pakatan Rakyat Convention due to take place in December, I need time to finalise the policy framework which hopefully will be approved by the leadership of the respective parties.”

Before the start of the PC I asked Datuk Zaid if he was going to tomorrow. I was given a very spontaneous YES. Any significance to my query? Remember he was called away from his open house Tuesday night? Reports have it that some in PKR was against his going to the Eastern  States. Period.

Today he reaffirmed what he told me at Tengku Vic’s dinner party in PD even before he officially joined PKR:  “I have no interest in the internal politics of PKR, nor of any of the other parties in Pakatan Rakyat. Neither do I aspire to assume a leadership role in PKR. I made this very clear to Dato Seri Anwar Ibrahim when I joined the party. I only want to be a facilitator to bring about the realization of a strong, credible and united opposition – an opposition with a strong leadership, sound common policies and structures to be a meaningful alternative to Barisan Nasional. Only a strong united opposition can restore democracy to this country…..”

On the sideline of this Press Conference, he made reference to jibes by PM Najib on his being found guilty by the UMNO Disciplinary Tribunal. “I believe I was framed by UMNO and found the findings of the Tribunal flawed, where basic rules of evidence were ignored.”……”When I was made a Minister, one of the first things I did was to ask the then Anti-Corruption Agency to investigate the findings of money politics against me by the UMNO Disciplinary Tribunal……The Prime Minister should not take jibes at me when it suits him. He should be more interested in the truth. I therefore wish to appeal to him, to instruct the Malaysian Anti-Corruption Commission (MACC) to complete its investigation and the findings disclosed to the public. I am prepared to face the charges if there is evidence of corrupt practice. BUT IF I AM INNOCENT, THEN THE PRIME MINISTER SHOULD HOLD HIS PEACE AND REFRAIN FROM MAKING SUCH STATEMENTS IN THE FUTURE.

HOW NOW MR PRIME MINISTER? CARE TO RESPOND? LET YOUR MACC DO SOME SNIFFING!

You are totally ignorance of UMNO politics.

Zaid was in a one upmanship war in his last battle for Ketua Bahagian Kota Baru as to who can stand the top up game.

The man is corrupot to the core!

Anon736,thanks for exposing my ignorance. For starters why don't you give yourself a name and tell us or better still give us proof that Zaid is corrupt to the core. If you hide under anonymity and make this accusation, then I say you are ignorant of this basic value system called honesty....its direct opposite being "accusing without facts". Get your facts ready, post it here and I will make sure the MACC gets it...and of course be ready to be a witness to substantiate your accusations. We will assure you that you, as witness, will not meet the fate that was TBH's!
By the way ignorance is not a sin, false accusation IS!

It takes all sorts to make up the tribe called the human race. Some have been gifted with what is called common sense. Others are severely lacking in it.

Common sense would have me say that Zaid Ibrahim isn't corrupt, regardless of what MACC may 'discover'.

But like I say, not everyone has common sense.

By the way, Uncle B, what's with your friend Hantu Laut? He seems to be misguided about the whole Anak Bangsa Malaysia concept.

I knew it! When Zaid first made his entrance into PKR, some within the party were feeling terribly insecured. Need we mention names?

Zaid,
You must be losing your patience and needs to get your space from them, and even if you feel intimidated, just don't let them get under your skin!

Errr.... The prime minister in question was actually Pak Lah when Zaid was found guilty of money politics. Why are you making reference to Najib? You're old, and already senile.

Now here is another of your ( and oposition ) hypocracy revealed. Both Isa Samad and Zaid Ibrahim were found guilty of money politics.
But you guys accepted and hailed Zaid into PKR but told the voters of Bagan Pinang not to accept Isa.

So what exactly your point Bernard?

Anon732, my point is you dont seem to understand what is written.... even made easy by hilites. Cant help you much then.

Ruth, did u notice exclusion from my blogroll. That explains huh?

Politics is similar to the WWF bouts.

In the wrestling, viewers are fooled by the silly stunts and controversial decisions, the referee looking the wrong direction, the obvious cheating etc. but they look real.

At the end of the show, there's a small notice saying 'Entertainment Programme'.

The kampong folks at the local warong will argue till the end of time that the controversial winner was wrongly crowned.

The same with Hindustani movies. The hero gets bashed, shamed, villified in the begining to crying viewers and end the show in predictable endings.

Our local politics seems to veer in the same direction.

What's the difference between Zaid Ibrahim and Isa Samad ?????

Guys
Have you heard of money laundering? So PKR like that lah. If you're dirty, join PKR and you'll be whiter than white.

Do you know that Anwar won the Deputy President post in UMNO just by talking? Azmin and wife are brilliant business people? Tan Sri Khalid was a brilliant corporate captain?

I am wondering what if Zaid goes back to UMNO, definitely a compulsory course in political science.

What's the difference between Zaid Ibrahim and Isa Samad ?????

should have let them contest against each other at Bagan Pinang and see what Pakatan says against Isa...

Word on the street is that Zaid should not have challenged or bypass Azmin Ali and step into East Malaysia.
No one challenges Azmin in PKR. Not even Ezam.
Azmin has Anwar firmly in his grips as he has proof of Anwar's affair with his wife. Proof which can easily be exposed and bury Anwar for good.
You cross Azmin and he will use Anwar to get rid of you. This is what happened to Zaid.

No on crosses Azmin in PKR.

That's old story la, we've heard that before! I don't believe AA is that all-powerful; he just needs to wake up, take responsibility of himself and be aware of 'shit-stirrers' around him out to cause trouble unless he harbours hope of striking rich with a B-Toto grand win?

Didn't you read what Uncle Zorro said - slander/false accusation is a SIN?

No, I didn't notice the exclusion on the blogroll but yes, it certainly explains matters.