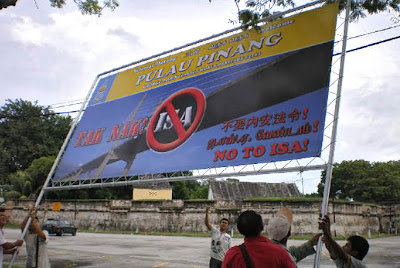 JUST as I am about to congratulate the Penang State Government on being the first to put up a NO TO ISA billboard, Daniel alerted me to his posting HERE. Whilst in Bagan Pinang, Daniel gave me the good news that the billboard was up on 10 Oct. I had not seen the pic of the billboard as Daniel meant to put it on his blog on 11 Oct. On 10 Oct I did a posting HERE . I wrote: I hope it is a billboard per se, sturdy and not filmsy to attract vandals.


LETS HAVE A GOOD BILLBOARD

THAT THE PEOPLE OF PENANG CAN BE PROUD OF.

LET'S DO THE RIGHT THING RIGHT THE FIRST TIME AND ALL THE TIME .

Do they have a permit to put up these billboard?

Permit are issued by Penang State Government! They could back date the permit even 15 months ago if they wish or even makes the permit valid till the next election.

yes, bn or umNO always back-date their permits for their own offences !

Now you see it, now you don't
When message is clear some won't
Like it because they simply can't
Accept what the majority now want

Can a state defy a law, legally constituted through the act of Parliament. I think PR government must out of their mind. If this is the culture and become norms, the country would soon dip in anomie and chaos. Everyone can defy any law, regulations. Well done PR goons.