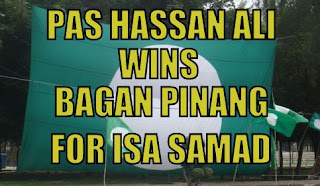 It is stupid to blame PAS, hasan ali etc. We have to admit that we put a wrong candidate. A 'reject' in his own constituency, general public here said that why should he think he could win here?

We should openly admit that we have put a wrong candidate. If you speak to any member of the public here in bagan pinang, they will definitely say that is our main reason for losing badly in the by election.

"Blame it on the rain" - Milli Vanilli.

WHATAFAK!!! When one gets OLD, is it normal for BLAME syndrome???

Zorro, the statement could be right, but I still there are more issue at hand.

Most of us, well, at least me, would want to see a viable political coalition among the three that can make combined policies, implement them, prove them to be workable, and convince malaysian that THEY are worthy of our votes come 2 yrs later.

It has to be done quick, very quick, and it only has 1.5 yrs to prove the new coalition can be functional.

The time is against them. I hope they realise the magnitude of the voter's disappointment.

Spot on, Uncle. Spot on. Barua is his middle name in case we miss it all this while...

if you think hassan ali is one only problem than pakatan rakyat will fail the next general election,big time.there were 3 estate were the majority are indians,i am sure the majority there won't know who the hell is hassan ali but the name kampung buah pala sure rings a bell.plus,isa is a budak kampung from bagan pinang.what about the pas guy?

also,why are pakatan rakyat supporters insulting the voters in bagan pinang? considering the next general election,you still need they votes.

Bro Zorro,
He the cause. The beer incident in Selangor.

The nons expecialy chinnese and Indian use to consume beer during weekend and holidays. And playing digit games and visiting nigth pub are some sort of passing weekend to these folks.

With the Hassan Ali turmoil about these case in Selangor,the nons are getting feared with PAS on a whole even its one men turmoil.

Now they are suspicious about PAS sincierity in Pakatan Coalition.This became a plus point for MIC and MCA to create fear among the nons.Its true.

This Hassan Ali is a"Musuh Dalam Selimut" i would say.He dream to become the MB of Selangor.Believe me , if PAS take action agaist him than he be another first frog in this mellinium to jump to the shit ship of UBN and will bring along with him other PAS adun in that state.

Why cant he be like YB Ir Nizar.?Better get rid of him.

Another spoil spot of PAS is that Nasha fellow with his support for the unity gomen.

Pakatan will lose all the state and back with only a few Parliment seat comes GE 13 if people like Hassan Ali is with Pakatan.Terminate him.Let him free to join the UMNO shit ship.He is worth that.

Plus point for UBN in Bagan Pinang"

1. Isa Corrupter from Teluk Kemang and very rich -plus point

3. Fat short dotty(also from Rembau might brought some home sentiment among the strong UBN suppoters- plus point.

4. Hassan Ali with his beer case which feared the nons of hi Islamic-plus point.

5. That Nasha fellow also from Negori.And he is so eager in unity talk with UMNO.Which make voters think they might well vote UBN expecialy the Malays voters-plus point.

7. Pakatan suppoters not allowed any near polling station but The UBN lickers allowed by blue dog-Plus point

well even a buffalo will win with this kind of advanragesa as UBN candidate.

IF that is so, then its more important to know who is the puppet master. Anyway, this guy did not win it for UMNO single handedly. There's also Zul Nordin in Kulim and the infamous "unity talks" with UMNO.

Yes, Agreed. Hassan Ali is the best supporter of UMNO...

Not only Hassan, PAS Youth also! Port Dickson people are the partying kind. When you protest Beyonce Knowles you also are telling these people their values are not good enough. Who are PAS to tell them that anyway? Who are PAS to tell that it is right and imperative that all Muslims must align their believes and thinking and attitudes to theirs? How do PAS know that their attitudes are in fact the right ones anyway? PAS operates under some assumptions that have been dismissed by Bagan Pinang voters, including Muslims obviously. Will PAS admit this? I don't think so. The day they do, then maybe got hope.

Agree, Hassan Ali is the main player. Ronnie Liu, Dzulkifli Noordin and Wee Choo Keong too, they all won the election for Isa Samad. For God's sake, kick them all out in the next election.

It's difficult to find a politician more repulsive and unpalatable than Khir Toyol... but Selangor's Hasan Ali fits the bill. I believe most Selangorians would prefer to see the arrogant & evil Toyol back in power rather than have Hasan Ali as mentri besar!

Perhaps you can tell us:

a. How did the team turun padang to engage the voters. Was it just superficial ceramahs or door to door in the estates (Indians) and new villages (Chinese)?

b. What was the messages like? Teoh Beng Hock, Kugan, Perak? Or how voters can still fend for themselves better if PAS was elected?

c. Even the PR bloggers and PR friendly onlince channels featured extensively on ceramahs and skirmishes.

Was there door to door canvassing in the estates and new villages?

What about the 'women' wings?
They applied innovative ways to be one above BN teams or were they contented with just waving flags and makan-makan with bits and pieces of slogan shouting here and there?

Granted that PR lost, what about at least door-to-door turun padang to thank the voters for
a. 'participation in the by-elections)
b. thanking the 2000 odd for casting theri votes in favour of PAS?
c. Any service centre by the defeated PAS candidate in Bagan Pinang for the voters to give feedback on unkept promises by BN and also an opportunity for PAS/PR to maintain its presence there till next elections?

Just because PR lost, it means abandon the fort?

One should check how Jeyakumar did it in Sg Siput. He did not retreat even when defeated 3 times by BN. He continued to be available for the Sg Siput folks and last year he was rewarded.

I am sure PR folks can do the same.

Are there plans like this, instead of 'blaming' Hassan Ali in Selangor? What has he got to do with all the 'local' issues in Bagan Pinang?

Its better to take aim correctly and constructively - targeting the voters and how to win them over next round, rather that waste 'bullets' on fellows from other states.

I think PR lost because you fellas forgot to pray to your god an ask him to spread his magic powers into bagan pinang ler...

IMHO, it is AWFULLY simplistic to dump the blame on Hassan. PR must do intensive and extensive soul searching exercises, URGENTLY.

BN won because 1Malaysia endorse corruption and bribery..it a way of life for many Malaysian...no money no talk and votes la bro...a simple as that...

So, what is PAS doing about him? Or should they get rid of their President and Deputy President first?

Antares, i fully agree with u.
i despise khir toyol & want him behind the bars soonest possible, but if i left only 2 choices, hassan ali & khir, i will kick hassan to the far far away seven river!

btw, i'm totally confused on the result. after the iccident of Teoh and Kugan, they still choose UMNO. what can i say... let have more sudden deaths in the country. and nobody should be responsible for it.

bagan pinang voters beware, it could be your family member!!!

70% of indians voted for BN in BP despite how BN treated the indians. Indians will always be indians ... sell outs.

There is no reason for them to vote PAS, when it quotes scripture to its own puepose....same as UMNO....at least with UMNO u get sewing machines and cooking oil. Wat can PAS offer besides new serban.......

As I've said in Malaysiakini:
"its only 1 against 7 in Semenanjung. 1 - 0 in sarawak. so what? panicking already you people who have hopes on pr before this? now, doubting? losing faith? you all are really playing and responding positively to what and as what bn has preempted. didn't you all see what pr perak state govt. had done in their short-lived administration? good result, yes? what about selangor - the cut on water bills on monthly basis - has bn ever done this ever?! penang? nothing good so far? c'mon you all, enough of this idiosincracies. you all are no different from those people in bagan pinang who just need their instant shot to relieve their existing pain. just like a junky, give 'em the shot, he'll be more than happy to serve you to death! in the 1st place, who let this junkies and poor peasants flourish in poverty and dirts? WHO? as if pas ever ruled in negeri sembilan. enough of this self-service self-indulgence kind of talks!"

Is UMNO A Racist Party

Antares, we beg to differ. khir the PENYAPU is a munafiqin saying one thing but meaning it a different thing. one rule for him and cohorts another different one for others.

and.. don't forget the zaharah kechik aka minah songlap. how you reckon that.

2) PAS has "pas-sed" it's expiry date with their latest ultra-islamic antics.

Spot On but walk the talk.

Yes, this guy is bad for the PR, he tried to damage the Permatang Pasir's by election chances by announcing the beer ban two days before election day, remember? But alas, he failed then. He certainly could had announced it after the Permatang Pasir election, but, he chose to before. Only he knows what his intentions are.

Anyway, there was no way for PAS to win at Bagan Pinang from day one. Let us stop the blame game, and be realistic ok?

hasan ally of BN must be put out for good in the next general election. Whether he contests in a state or parliamentary seat, just dump him, REMEMBER, RAKYAT, IT IS OUR DUTY TO DO SO. AGREED, WEE CHOO KEONG TOO, from the Most Despicable Party (MDP), already close shop, I guess.

Oh come on! Get over it, you can't win them all. Stop the blame game. Do you think Karpal Singh will win in Bagan Pinang? PAS was never and still isn't a force in the southern states.

Even if all the indian-malaysians and chinese-malaysians in Bagan Pinang voted PAS, PR still could not win as these barely cancel out the army vote.

Pakatan need to think of ways to win over the malays in the southern states, DAP included.

Well something obviously not working right..!!

All this while it seem DAP & PKR does no-Wrong, so therefore the "scape goat" musta be..the oddess among the coaliation. PAS..,and narrow it to a few personalities..!!

The assault upon him will continue..!!

Does his "Rakan Syurga"...comes to his aid !!That too will remain to be seen.!!

I believe anil is right on the money.