YOU NEED ALL THE LUCK APCO WORLDWIDE 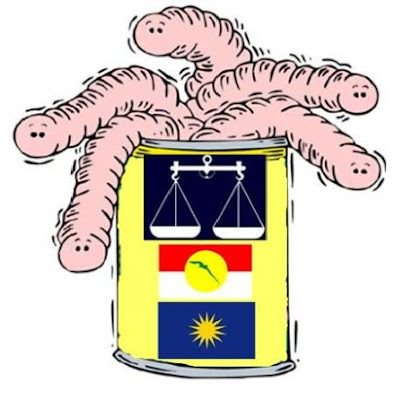 It is rumored  that the contract is worth some RM20 million

Yes RM20 million to improve PM Najib’s image is chicken feed when some USD1.2 million was paid to disgraced and convicted felon Jack Abramoff (a Jew, if you do not yet know) for Tun M to get an audience with US of A’s most despicable President Bush in 2002. ("It is true that somebody paid but it was not the (Malaysian) government," Mahathir said. "I understood some people paid a sum of money to lobbyists in but I do not know who these people were and it was not the Malaysian government."} Ahem......

It is a gargantuan task for APCO which will include crisis management, issue management, government relations, media relations, coalition building, and opinion research. APCO will have a tough time influencing decision makers and shaping public opinion by crafting compelling messages to offset anti-1 tirades.

Just to satisfy my belief that APCO does not know what they are getting into I would like them to name the government characters involved in the following WHO IS questions:

Aside: These guys have the licence to wed 4, why are they having to go to hop, step and jump?

Answer: Either they are of the pussy-whipped breed (as in henpecked), or the forbidden apple is always much crunchier!

This story broke in August but it's taken Koh Tsu Koon two whole months to finally admit it. Check out my blogpost dated 26 Aug! :-)

No amount of purfume can make this Najis gomen smell good; no amount of whitewashing can BN rule can make them credible. No wonder the American PR outfit is charging an arm and a leg for their services...they know the formidable challenge ahead!

Uncle Zorro
forget about Mahathir paid Abramoff to chit chat with Bushy Bush. that was long past!

now how much our tax payers moneys spent by groping JayJay paid Paul Wolf to get Najis The Faggot talk to Obama end of the this year....???

the country need another stimulus package to cover the 'consultation fees', no???

Brother!!! forbidden apple is much crunchier!!! hahahhahahaha
The winner of who is who will be.....
Go to hell APCO Worldwide.

u really hate malay muslim leaders (except those who serves yr interests), right? lies and slanders doesnt really matter. its getting obvious, u dont want the truth or what is good for this country. all u r only interested in is getting yr racist bigoted agenda ahead.

its the Malay leaders that is selling off the Malays. I am Malay too.

Correction, Big Cat, who said to Zorro: u really hate malay muslim leaders (except those who serves yr interests), right? Your mind a bit twisted lah. We hate arrogant, corrupt, dishonest, greedy, hypocritical, authoritarian public servants and symbols of power - regardless of their skin color and operating software. Calling Zorro "racist bigoted" is a very unfunny joke. Do it again standing in front of a mirror. Then go get yourself spayed cepat-cepat.

Big Cat you MF pussy. What are you on about racial issue here. I don;t see any racist comments except yours you dick head. Can't you stomach the fact that all this itchy pricks are your kind. Thats a fact you pussy and no one can change that. Zorro was kind enough not to mention other more despicable dick heads of your kind such as the 2 frogs from Perak who thought that the 2 lard-laden lip whores from china that they so enjoyed smooching were god sent.

I myself do not know the answers except 1, they must be doing a great job but do tell.

I am a voter in PJU and I gave my vote to DAP in the last GE. But look what has happened to SS2, DU, DJ, Aman Suria today!! There are hundreds of fuck shops operating under the disguise of Traditional Massage, Foot Reflexolgy. PJ is now worse than when it was under MCA.

DAP opened a cafe called Rocket Cafe in SS2. The shareholders are sleazy characters who owned a few illegal businesses in PJ. The cafe is a front to launder money. Tony Pua and Dr Cheah are both a letdown.

big cat said...
u really hate malay muslim leaders (except those who serves yr interests), right? lies and slanders doesnt really matter. its getting obvious, u dont want the truth or what is good for this country. all u r only interested in is getting yr racist bigoted agenda ahead.

My dear big cat,
Race is not the issue here. Those questions posed by Uncle Zorro are facts. Unfortunately many Malay leaders were involved ... .

People....will give list of names but you fit in as you think most correct...some are too easy...one or two may be difficult. Some have more than one offence on that list.But of course it was not the intention of this post.

Big cat is definitely not in....he is too small a kuching to get a mention amongst the luminaries.

Om today 23.10.2009 NST Classifieds, there was a few pages on POOR RAKYATS lowANDn medium cost flats being auctioned off by the respective banks auctioneers.

Imagine! Bank repayment for these low cost flats which ranges from RM30,000+K to RM60,000+K might be around the most RM500 or less and yet the POOR RAYKATS could not service their loans. WHY?

Probably this is their only selther, now being placed under auction by the bankers.

What did this message tell us?

That our currency are glossly of no value though the poor rakyats work hours of overtime trying to earn more.

What was left after paying for food, children's education, transportation, necessities, etc., the balance are not enough to pay the installment for their only selther.

Everything nowadays are so overly inflated in prices and yet the ruling government are doing noting to contain all these problems.

Likewise for cost of transportation and education. I doubt poor families could put their children through colleges and private universities.

I wondered where all the money that the government spend went to... and I wondered how the 2 economic stimulus package funds in term of billions released were used and how it benefit the poor rakyats. Who benefited?

And here now, we have our PM wanting to 'clean' up his image by spending some RM20 million of the rakyats hard-earned money!

With all the SHIT THINGS that the present ruling government did over the past many months plus the last 50 years, no amount of money could 'clean-up' yours, your warlords', your free-loaders', your toyols' faces.

Bloggers who read this... take out a piece of paper and write down all the bad they have done across to you, to the nation and states... and please... come the next general election, you know what to do!

We, Malaysians procrastimate and take all things as a passing comment, soon we all forget... but now please try to learn to remember and please don't procrastimate!

*the tan seri who last time or still is the chairman of Gabem, yes?

*the mantan mb of Perlis aa? a pakcik drebar teksi told me once maa..

* not sure one la this one

*this one aa no secret one already out in the papers many years ago maa.. you know who what? the menteri ayam maa.. haiyah.. selangor maa..

Uncle, how many korek answer? got price aa?


Uncle, why not ask about that "raba" federal minister? you know who one maa..
-ms. ong-

Eh kuching kurap(big cat,it seems),
The government just happen to be a Malay Muslim majority who more often than not F-up big time by abusing their positions!Who do you blame?Trouble is these cretins think they are 'the untouchables' but time's running out.....


Well, let's hope that answers your questions then. LOL!

Ahmad Syafiq....you get an A++++++
for matching the right person with the wrongs! Can I buy you a teh-tarik session?

at these rate of hassan alis , soon we all be screwed....unless we get the house kick those mad cats ..we be oon be history

ahmad syafiq you are good lo. I had couple of unknown and you helped me to fill in the gaps. Thanks mate

big cat....only fight back you have is to bring racial issue