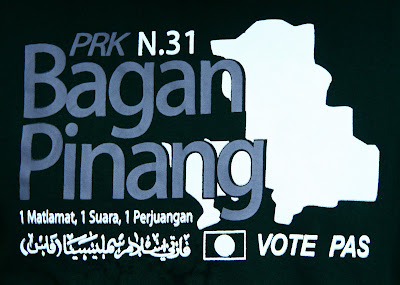 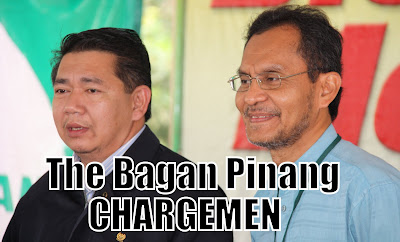 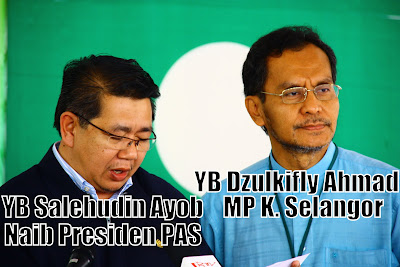 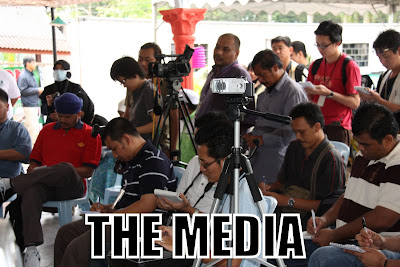 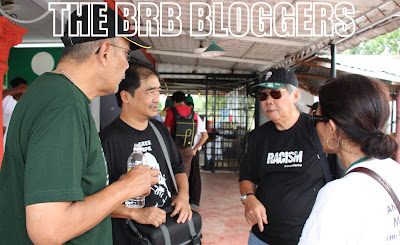 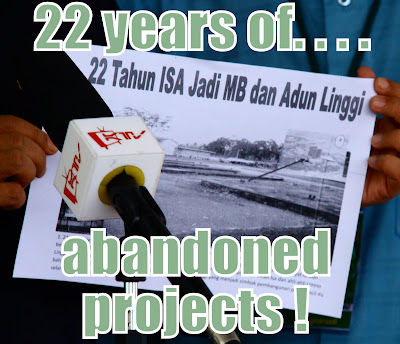 THE first Press Conference kicked off on the dot of 11:00am and YB Salehuddin Ayob, true to form went into the specific
business of the day. UMNO had already made a police report. Its UMNO Putera chairman, the Preseton (not Princeton University) MBA or Phd) graduate made a police report that he was assaulted by 9 (NINE) PAS supporters. Instead of making a police report he should make thanksgiving offerings for being alive, unlike KUGAN and TEOH BENG HOCK. According to YB Salehuddin who was in the Nomination Centre, this Aseez something had a smooth unblemished skin and did not look traumatized and very alive after a 9-men assault, unlike Kugan and Beng Hock. Of course  everybody is telling LIES except UMNO.

I asked my favorite question: Is the Election Commission addressing the problems posed by PAS re postal votes. YB Salehuddin and YB Dr Dzulkifli said that a meeting in the next few days was on the tyable.

If you think that there are no issues in Bagan Pinang, you would be in for some surprises. We are aware that Tan Sri ISA assured voters in BP that he ain't a recycled politician. Well, you just got to be patient. PAS has some goodies and the Barisan Rakyat Bloggers also have planned a few things. It should be an interesting week. The last pic may give you a clue. Stay clued then.
Posted by zorro at 7:48 PM

With the PAS Research Center's head honcho leading the charge... only one thing that needs to be said to the people of Bagan Pinang -
LISTEN TO YB DZULKIFLY AHMAD !!!
This man is gooooooood.

I haer Negri Sembilan is full of Menangkerbaus. That's the cue to go: "Moooooooooooooo!"

The location where that dark "putera/putar" from UmNgook was "assaulted" is manned and guarded by the our famous polis .
Plus there were a chopper in the sky.
He still have all his teeth after being beaten by 9 PAS supporters?
No witnesses from such a commotion under the ever watchful eyes of the polis !
So simple to spot a lie..hahaha

moon cake festival. bulan is the only choice of course.

moon cake festival. bulan is the only choice of course.

A big THANK YOU to you and all the bloggers for helping in Bagan Pinang.We are also doing our part and being homemakers we have our ways of reaching out to the residents who do not use the computer.
God Bless All Of You.

Honestly, I really don't know why you & ya fellow PAKATAN RAKYAT supporters bother to even go down to BAGAN PINANG for campaigning.

Based on facts & figures, it's IMPOSSIBLE for Pakatan Rakyat to defeat ISA SAMAD in the coming by-election. Infact, everyone foresee PAKATAN RAKYAT will end up as WHIPPING BOYS to the BARISAN NASIONAL candidate.

It's better to focus on the Selangor issue as there are strong sentiments coming out from PUTRAJAYA regarding toppling PAKATAN RAKYAT in the Selangor State Govt.

What's even more sickiening is to see DAP idiotic leaders being at BAGAN PINANG. Are they trying to pretend as if DAP & PAS are best of friends??? They can't even compromise & discuss basic conflicts behind closed doors & yet wanna show to others they are best of this & that.

ADVICE: You can put your last PENNY on Barisan Nasional to win BAGAN PINANG. You'll infact WIN it without the need to even do anything. They call this "SURE WIN" or to most gamblers..."MONEY IN THE POCKET"

Toky....not to worry. We are all unemployed and cannot find better things to do. Unfortunately UMNO is not a very decent party, so we chose the lesser of the two evils to support. So dont worry about the outcome. It is the last laugh that counts.

Between the two evils?
Better off with UMNO. We have no idea what in store with the other one. No experience at all!!!

No, we are no longer better off with UMNO Baru. Umno has forgotten its roots and the promises they made with the various parties of the Alliance and later with other founding parties of the BN.

The current entity is a vicious self serving entity, that will go the way of KMT and the Soviet Union. But it will take a lot of innocents with them.