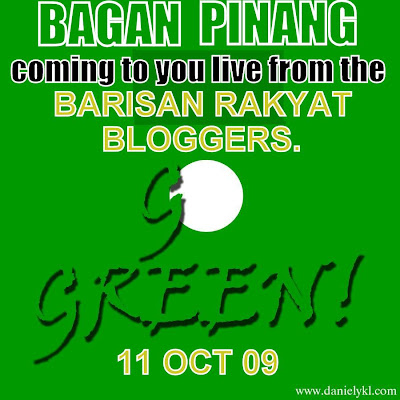 WE ARE GETTING READY FOR THE COUNTS

iN THE MEANTIME GO VISIT FAUZI AT PERISIK-RAKYAT

Chinese voters coming out now, after sunday afternoon chinese drama. How come our Chinese and Indian friends give priority to their Sunday fare to voting for their man. 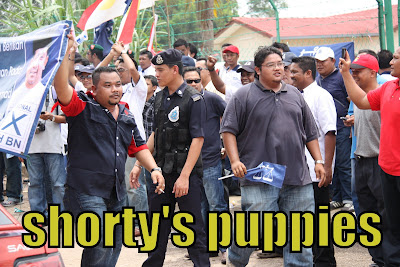 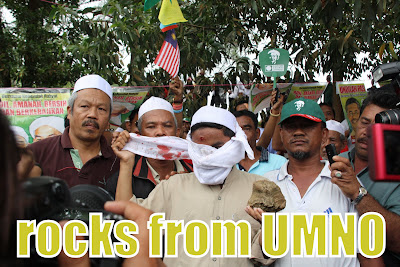 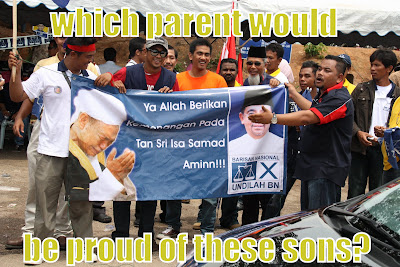 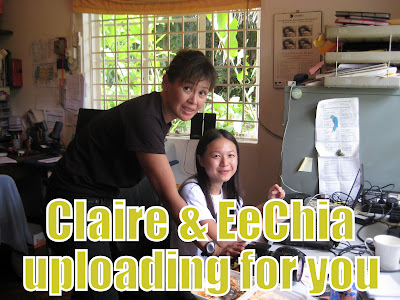 Rodi and Claire have joined Danny DelCapo and Mila. They are heading for the more exciting zones after tempoyah lunch. Hantu says they are the Special Bunch's rempits without the agro. 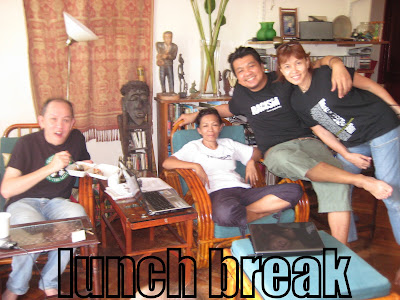 At Panglima Adnan 71% have cast their vote.

pics sent in by the Special Bunch 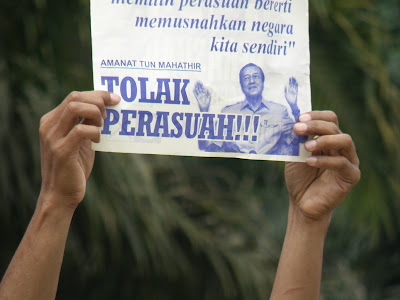 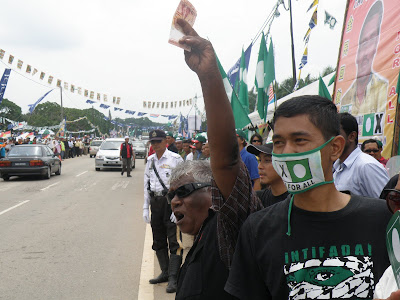 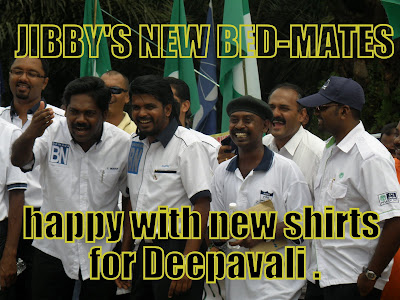 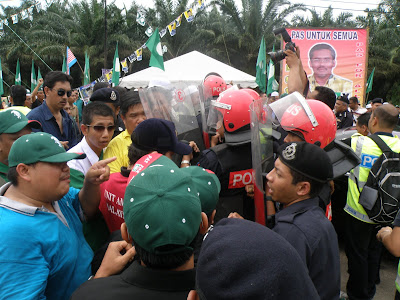 Duke and Stephen still refuses to go to their Ladangs. They said no point as the whole ladang will be busy watching the Sunday TV2 Tamil movie. They have a point according to sources close to MIC.

Telok Kemang - BN supporters stoned Police by accident. Arrests were made. FRU separates BN from PAS and asks both to disperse.63.78% have voted.

Sek Panglima Adnan - 51% have voted....but this is slow......when will the phantom voters be released.
FRU separates

The Special Bunch has come back to Bunker for a break and lunch. 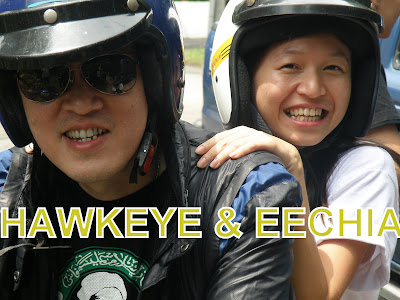 We will be ba 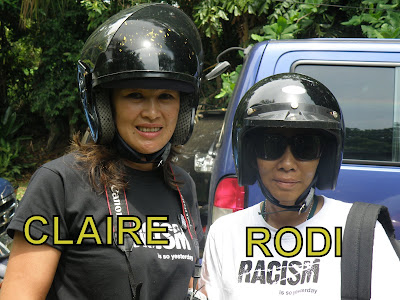 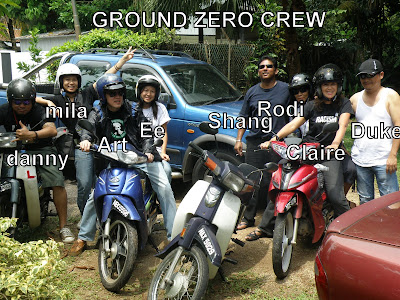 Rodi and Claire came back to check on us in the bunker. We have sent out an alert to look for the missing Duke. Guys concentrate your efforts on some todi outlets in the ladangs. That is the Admiral's advice. Shang, it is your responsibility to smoke out your partner.

Situation in Sek Panglima Adnan very tense. PAS still pacifying their people. This tenseness has been going on for sometime. The police has to be firm but fair. Both PAS and BN has to rein in their hotheads. The are no leaders if they cannot difuse this volatile situation. The police are no better if they cannot quell this situation. They should take off their uniforms and prove to us that they got it there. Period.

At Panglima Adnan, reacts against insults flung at Tok Guru esp. the poster of an ailing Tok Guru. I wouldn't waste my time getting angry at stupidity....being silly at times is OK, but being stupid as a preoccupation should never be tolerated.

Gerakan boss KSK visits Sua Betong hoping to console both tee Kiat and the Doctor. Three stupid big-time Chinamen about to lose their undies full-time. Some people are really thick.

Shang reports that he has lost his pillion rider Duke. Jeering prevails at Ladang Siliau. A lady UMNO adun was ordered behind the line by police officer Selva.

Alan met up with Iranian Sattelite TV (Andy Sengiah) who shot footages of the scuffles at Telok Kemang. He hurt his shoulders filming the fracas. Damages to equipment: lens hood cracked. (cost:RM2,600)

Did FRU apologise for beng tardy in preventing the scuffle? Why should they....they prefer to deal with candle light vigilers.

PAS leaders all assemble at Telok Kemang. They walk down the line to appeal for calm. However, Alan had a word with  PAS Nazzaruddin Mat Isa who is convinced that BN started the provacation. That's normal, the blame game.

2 not 4 arrested at Telok Kemang. Temperature still sizzling. Police showing restrain although stones have replaced water bottles in this exchange. An unidentified was hurt by the stone throwing. Time the police took control of the situation. This is not a candlelight vigil.

Fauzi, Alan and EeChia separately report this similar fracas at Telok Kemang. Bottles fly from one side to the other. Police arrested. As warned by PAS yesterday, there would be imposters. Fauzi confirmed that the 4 arrested were BN plants. Things hotting up and the overcaste sky not helping much. No voilence should be wished on anyone.

Ronnie Liu greeting supporters. He left PD for KL this morning at 1:00am. He is back for PAS after officiating a function in Selangor.

Hawkeye spies UMNO mat rempits in orange outfit (like in Permatang Pasir) speeds by taunting the crowd. Bottles exchanged between both groups.

4 police trucks in Sek. Kg Baru Si Rusa enclosure. For sure this is not their R&R centre.

Voter turnout at Telok Kemang stands at 12.03%.....MAFREL have 2 reps in each polling station. They were not allowed into the camps during the last two days of postal voting. The EC really believes in CHANGE!  LANCHEOW someone in this bunker shouts out. Sounded like the Admiral.

Still no news from Duke and Shanghai Steve.....the Virgin was against this partnership at last night's final meeting but Rodi gave in to this tested Manek Urai pair. My intuition is that these two are moving around identifying R&R for easy access in times of need.

Dang.....Boom received a transcript in Arabic.....we have sent it for translation....stay tuned if you are interested ....Colin thinks it is more expletives than what is happening.

PAS candidate Dr Dzul arrives at Panglima Adnan.....opposition parties taunt each other.....this will be the trend.

Supporters from both sides taunting each other. Voter turnout 1500. Rodi, keep away.....stay safe.

Generally tide rising and should peak around 1100am.....so reported Alan

mister zorro....
thanks for the info
our other like albanjari,poji and other are OFFLINE for a while

thanks for the update

Sir.. Check my blog sidebar for my updates on twitter

I will be following you guys all the way...the whole day - ...may God be with us!

Thinking of you all. Wish I could be there. Take care, darling.

Thanks you for being in the front line bringing us news of aal these by-elections.
For us who can't be there we have to PRAY hard.
PAS & PR will overcome with the help from God Almighty!
God bless & good luck!

Wow, Zorro... sounds like a very well-coordinated operation you're running in PD (except for the delinquent team of Duke & Shanghai :-)... also seems that Bagan Pinang is the most aggressive by-election so far, since it's the frontier between PR and BN controlled states! If PAS wins in this Umno stronghold, BN territory will rapidly shrink across the nation...

Our prayers are with all of you.

Thanks for the LIVE coverage - no tv station can beat this!

Though we are all aware, BN winning this buy-election is almost guaranteed, I really admire the spirit of PR election machinery people that work tirelessly.

For that, you all are my heroes!

Greetings to Uncle Zorro and our Special Bunch

Our prayers are with you, always.

Although BN's V is almost guaranteed (reminds me of Ijok Buy-e, instant developments mushroomed everywhere in BG), i really admire the spirit of PR people, who campaigned nonetheless.

Just like one blogger succinctly says "LAWAN TETAP LAWAN", even if the opponent used tactics to blind the refs.

Above all, thanks Uncle Zorro and our Special Bunch that have been providing us LIVE coverage on each by-election. I must say you guys beat any MSM anytime.

May God bless this Ibu Pertiwi

Duke, I suspect, bumped into a bitch in heat and is busy cooling her down with an icepack. What a compassionate guy we have here, another human angel!

Uncle Z ,Is the presence of the unseen guests altantuya and TBH felt in this By-Election ?
Felt anything strange?

Dear Zorro,
Wish you all the BEST. Thanks for the up-dates BRO. Shang take care Bro.

GOOD Job to all of you!!

Will buy you GUYS A round of .
Drinks..Owe you guys ONE.

Keep up the good job.

Oh, that's no longer your average "sarcasm", not as you have claimed, Unker Zorro.

Looks like your favorite Chief Minister have failed, once again !!

I pray for a PAS victory

last week we had dinner at luket, the election was our main course...we collectively made one decision vote for b n ...one reason? we dont trust pas as long as there is some bigots like hassan ali ...we drove back last night n stayed with my umcle..all in we , 26 of us made our vote count ,

Looks like the Army COs did all the voting on behalf of their units. Early results show that, minus the postal votes, PAS is actually ahead.

UMNO endorsed corruption. All Malaysian should be proud, and join UMNO in celebrating Isa's winning.

Bro,
Even a buffalo contest using UBN symbol will win there due to 4600 postal votes.

Pakatan not allowed to campaign in army camp but the UBN did it.Pakatan suppoters not allowed near polling centres but UBN regime can. All well planned trics.
The EC and Blue Dogs are UBN ass lickers and will be like that until doom day if the UBN in power.

The Chinese and Indian show PAS that they cannot always trust the moon.

Special thanks to National Hero from Selangor. Keep it up, comrade Hassan Ali.

Hey, Zorro and everybody else who has been helping out in Bagan Pinang, another great effort all around. I think we managed to get Umno real worried for a while there :-)

a blessing in disguise for Pakatan Rakyat..now they will have to work more harder as a team/coalition
in confronting an awaken BN...

to all the DAP adun of NS....
this is a wake up call...
without the Malay vote DAP or PAS is nothing....unless they start engaging/approaching the Malay voters who are the majority in Malaysia..DAP NS will lose all their state seat...

Why the Chinese sacrifice their vote for PAS? Answer: Sincerity, Fairness
and Stop Race Discrimination.

Why the Indian sacrifice their vote for PAS? Answer: Stop Race Discrimination, Sincerity and want their life difficulties be able to be understand.

The Chinese and Indian doesn't want money from PAS.

What BN can offer to Chinese? Answer: Money and security.

What BN can offer to Indian? Answer: Lots of Money and security.

The PAS cannot give security to others because his own people get Parang's and Batu's.

The PAS cannot give money because it is wrong.

If the PAS are not sincere, power crazy, telling lies, only fairness to one race, willing to sleep with BN anything just benefit to only one race and stop other races of their halal drink like the national champion Hassan Ali endorse by it No.1 and No.2, tell me what else can PAS give?

Hassan Ali , now u should KNOW why PAS can lose without non-muslim votes ?
Wake up for your pensen laa !!

Although it may be academic,but would
like to know about the postal votes you mentioned at:

Are not postal votes done at the Army Basic Training Camp for Military personnel and their spouses?

BTW, thanks for the live report... none of the MSM gave so much details as You and Team did.

GOOD for pas ( NOT PR ) to lose or they create more ripples in other PR states, AWAS !

umNO endorsed corruption !?
why then Tuhan allows its victory !?
pas is the issue & problem !