EVERY Wednesday, I will feature a blogger from Sarawak. When I visited the Bloggers in Sarawak, prior to the Batang Ai by-elections I did not meet Dr John Brian as he now resides in KL. Dr John is editor of this site. 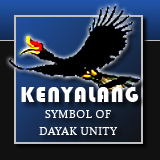 SHOULD SABAH AND SARAWAK SEEK AUTONOMY OR FULL INDEPENDENCE?

Just my personal thoughts and opinions for discussion here: “Dengan Izin YB and the citizens of Malaysia”

Firstly, I am pleased to hear and more than agree for Mr. Baru Bian (an experienced lawyer and well versed on NCR Land issues) to lead the Dayaks. In this new generation agenda, Dayak Baru not only need a capable leader but an executive leadership of creditable and reliable leaders who should finish well not only for himself or herself or his/her family but for their peoples and the state in general.

These new leaders are not appointed but  act as rakyat’s nominee(s) and/or trustee(s) to “serve” the rakyat and the country in general! They are expendable neither dependable nor acting as monarchy but for and by the rakyat.

Secondly, it’s better for Sabah and Sarawak to seek legal and rightful autonomy from West Malaysia after all they have never recognized the proclamation of 1963 independence of these two states within the MALAYSIA context ever since the 16th September, 1963 i.e. when Sabah and Sarawak joined Malaya to form MALAYSIA.

**Sarawak achieved its independence on 16 September, 1963 and joined Sabah, Singapore and the Federation of Malaya to form MALAYSIA.

Fourthly and so on: You may add the rest…. (Dayak Lama and Dayak Baru/ BN and PR)

Disclaimer: Point of thoughts only not instigation or discrimination or provocation but a privilege to speak out as a citizen who believes in the truth of democracy, human rights and indigenous rights.

What could it be if Sabah and Sarawak (referred to as “East Malaysia”) seek to withdraw their constitutional rights out of the formation of the Federation of Malaya and/or Malaysia?

I presume it would tremendously benefits the people of both states in many spheres or possibilities via autonomy or outright independence as new “North Borneo” or new “United East Malaysia” (just a suggestion) or whatever name that is favorable to you.

Notes: Even the current or the future CM(s) could become the new “Rajah” or the “President” or the “Prime Minister” of the new states “North Borneo” or whatever name that please you thus has full immunity from the two states and recognizable by the United Nations and other power nations. I also believe countries like China, United Kingdom, French, Australia, United States of America, Russia, Japan and many others are keen to support this formation of the new “East Malaysia”. Is it viable, feasible and worthwhile?

Being a new independence nation yet a bigger and stronger states, and inter-alliance with the regional Asean nations, the Commonwealth, the United Nation, the European Union, the 18 American Native Nations and others both Sarawak and Sabah could prosper well as these two States are able to tap the opportunities of greater political stability, better economic growth and security strength within a unified new federal system of it own government.

New “Financial and Logistics Hub of the East”

Although there might be some initial skepticism in response to this new development, especially those concerning the welfare and the protection of their interests, I am pretty sure this skepticism would one day proved unwarranted as the two State continued to prosper to what it is from today to become a strategic “Financial and Logistics Hub of the East” i.e. located on the 3rd largest island of the world known as “Borneo”.

On the social front, the attainment of racial harmony would help to provide the foundation for the human development of the two states and enhance by the Kalimantan neighbors.  As these two States that have many indigenous ethnic groups practicing different religious beliefs, traditions and cultures, racial tolerance and harmony are important factors in ensuring a stable political environment.


The new formation of “North Borneo” would one day be proud of its achievement in fostering such close ties among its different ethnic groups, thus promoting peace and harmony as well as sustaining stability in her political milieu. Its economic development could also benefits West Malaysia and its peoples too.

Economically, these two States could prosper by leaps and bounds. Endowed with huge reserve of natural resources and large tracts of land to be potentially developed, these two states have been ranked as one of the two resource-rich States in Malaysia.

With the formation of this new “North Borneo”, these two States could plan, coordinate and centralize its political and economic development in a new administrative zone. Hence could result in the future rapid pace of development throughout these two States in the next millennium and in compliance to the UN Millennium Growth Development.

My apology if this article become sensitive and/or racist or you may delete it as I mean no harm to create any havoc or other but to discuss on the subject openly if we believe in transparency and the true spirit of democracy.

Enti ka berani, anang takut-takut…. Speak the truth and believe in yourself if you dare to dream and achieve a better “Change”. What is the paramount thing that Dayak Baru needs to work on harder in the years to come is not only to “Change” but to improve it better and effectively? How should Dayak Baru view their role as far as making these changes happen and in terms of managing this process of “Change We Must”?

Please do not think for one second that people of Malayan states like my Terengganu have never thought of seceding. Imagine an independent Terengganu with all the oil and gas riches. We can be like Dubai. So Sir, please do not lump us Semananjung people as one. We too would like to be free of Muddy Confluence.

Sabah and Sarawak should merge with Singapore. Then we will see some amazing chemistry - mostly positive!

irresponsible people like these are the reason why we have ISA and sedition act in this country.