SOME PERAKIANS ARE VALUED AT RM30 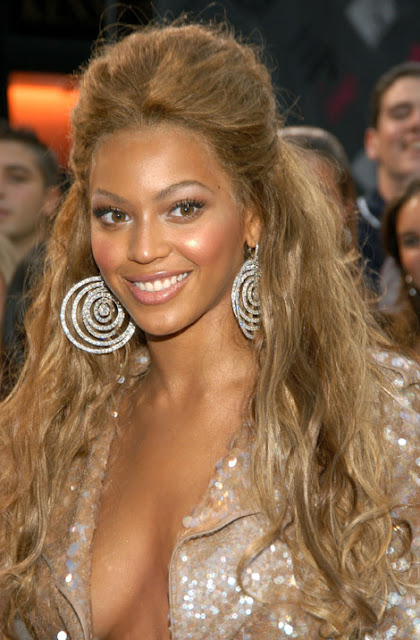 PAYING RM380, I will get to watch Beyonce Knowles perform only from a distance. For being paid RM30, some 30,000 to 50,000 Perakians got to see the PM and his First Girl ride by open-topped. Quite a deal depending on your value system. Of course this was orchestrated by the illegal stand-in Mamak Zambri. Never mind his devious antics as it achieved its aim - the PM was tickled thrilled such that he now associates traffic jams to Perakians coo-ing up to his 1 Malaysia love affair:

Najib, said the traffic jams meant that the people of Perak were embracing the “1 ” concept. 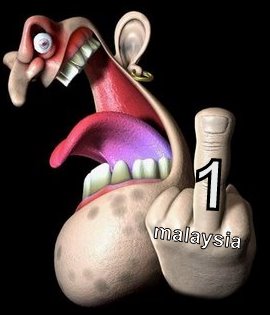 “You are not here because you were forced to. Your presence is out of the sincerity of your heart and your willingness to show support to 1 .”

Najib added he had never been so proud to see such diversity in the crowd.

“As I entered this stadium, I was extremely proud to see this place packed with the people of 1 . I waved my flag and I saw in every corner of this stadium, people from all walks of life, people of different races and cultures.

“I thank you for this. I am happy to see the spirit of the people of Perak in celebrating this I Malaysia ideal,” he said to the crowd that listened in rapt attention.

This 1 this and 1 that has distracted some of us somewhat. But it went too far when some clown coined his 1 Toilet to lend weight to the PM originality.  (was it?)

And if you think 1 Malaysia is a brain-wave, see the original untainted 1 Malaysia HERE

My take is straight forward....cut out all the bull, talk straight, tell it like it is! We don't get fooled easily these days. 22 years of BN and they have exposed all their dirt and this one gimmick is no different. 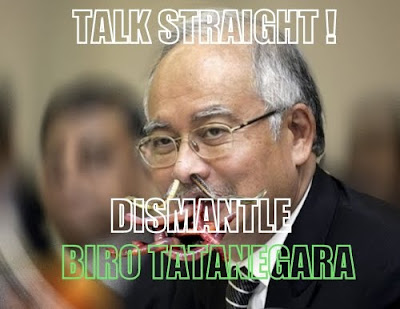 Perhabs OTK, KTK, SAM can help to explain:
WE ARE"1NEP41race" NOT RACIST

HahaHHa, a good one from this 'Mastermind of Perak PowerGrab'!

Did Rtm cameras zoom in on those 'peoples of all races and cultures' that made up the spirit of the people of Perak? I thought there were alot of Indonesians and busloads of paid spectators all looking forward to foc Hari Raya Open House? Since they are all so cheap RM30 is alot of money for their effort eh?

Never knew the Najis can descend to such despicable depths in trying get Perakians to support him, conveniently forgetting that he cheated them of their lawfully elected govt by inducing 3 frogs to jump to his side. But what can you expect of someone who blew up Aminah with C4?

You know its time to stop supporting pakatan rakyat when they start speaking against unity.


PS - i think PR has caused more traffic jams with their riots and street demos then BN has done.

Beyonce cancel, liao!! kekekeke. Don't worry bro, what goes around comes around, karma police will get to them eventually.

Too cheap lah, RM30! But then again, what to do, times are bad.....
It's an insult to those who can think for themselves.
So, these people will keep on hoping BN will give out more money, otherwise they won't vote BN again.

I think this gathering is a prelude to Perak state election... especially after UMNO won Bagan Pinang... it's just UMNO's modus operandi before decide to dissolve parliament / DUN...

oh SHIT! is that Najib??? he does look like SHIT!!!they goes my taxed money to his bulging stomach. idiot!!!

Once again zorro, you are acting all high and mighty, like a dick.

while i don"t need to comment when i agree with you (there are a lot of parrots here), but when you blast the poor practical people instead of just the evil governement, better go check your blood pressure. might die soon.

times are tough, and if given $, people will take. that's all. you can blast najib for such manipulative trick, but the people, it's just extrac pocket money they need to get through. it's not like they are taking the money & in return signing a petition to support ISA or anything like that.

while you are on the pakatan's side, opinions and blind blasts like this title just makes you as good as extremists like kulim wonder and pas youth.

I was bloody pissed that nite...the whole entire road (1 that lead to my resident) was totally haphazardly park by huge BUSes along the kerb for the stretch of 3-4 KM.
Why so many buses instead of passenger cars? Are all of them from outstation..yes. What about the locals..?

Next is..why no cops & enforcement giving summons to this idiotic hazzardous parking? What causing the traffic?

The last event held at Stadium...the whole car that park illegally got summons.

During the Anti ISA march..the heavy congestion & traffic was caused by the Cops, not by the huge march.

Yes..the crowds mainly comprises die hard Members of Component party. Yes..they were paid RM30.00 each.
Yes..its the State big lost for spending over RM1 million over the event & thus increase the State Deficit position.
Yes..its an act of DESPERATION , as the last Nizar's Ceramah attracted 50,000 mainly the whole of Ipohans only & they came voluntary.
If Najib thinks he got the support of locals..please allow the rakyat to decide who they want for state governance. Please..as Najib said, Rakyat Didahulukan. (Seems UMNO didahulukan, rakyat dikecualikan).
Please dont educate & decide for Rakyat Ipoh.

Najib..Rakyat Perak is not stupid. those real educated locals surely know what u have done for us. We are not easily BOUGHT OVER.

Why is CKY so gullible. Its time to support Pakatan as UMNO is getting racist by the day.
BN or mainly UMNO is trying to DISUNITE the races.
Najib should pay Lim Kit Siang for the 1-M'sia slogan as is LKS original idea...Go get education & come out on your senses. Dont daydream..CKY.

Lets sing a rap song!!! It would make a nice theme song for the next GE!!

If you don't get what you want,go ahead & protest with a COW HEAD!
Or you can try C4 for BIG BANG!
But just don't mention Her Name in the Media.....All Tan 2 Ya!!
He never met that Mongolian woman..so he swears !!


Say No to the Ummmm NO Party!!

I know of many who have been comfortable, so used to collecting rent and scraps thrown at them from under umno's table that their brain are hardly used. Don't think you fall into that category do you?

Dirty politicians are scums of the earth regardless of their party affiliation, they deserve to be removed from office.

You saw Perak PowerGrab happened under your nose, how Article 72 Clause 1 & 2of Perak State Constitution was abused left right and centre yet you still feel there is good deed coming your way to benefit your children? Sigh!

PS: For the record, there had never been any street riots in Perak other than UMNO's rowdiness! Police came in droves and truckloads just to break up concerned citizens in their peaceful assemblies.

Those 'Men-in-Blue' and Red-Helmets were the cause of traffic jams when they were summoned by your political masters to antagonise and intimidate the rakyat who ironically pay their salaries. You aren't aware?

The stars and an insignificant looking prophecy from Nostradamus predicts an embarassing turn of events for Najib and BN in Perak from the Quatrain below:

People of argent state below their fortunes,
The few who hath betrayed them,
The usurped regain the upperhand
The end of a tangle by the usurpers.

If Najib is really dead serious about his 1Malaysia, then the Biro Tata Negara becomes redundant. Its continued existence and the work that it does only stands to show the lie that 1Malaysia is. So, maybe, its about time we make a honest man out of Najib, if that is at all possible. Push him to shut down the Biro!

Will Star and Str Times do an article on Biro Tata Negara and what exactly do they dish out? I am sure it will be damn interesting to the NONS and the world at large. It should squarely place Malaysia on the map as a SUCCESSFUL, PROGRESSIVE but racist, pariah COUNTRY