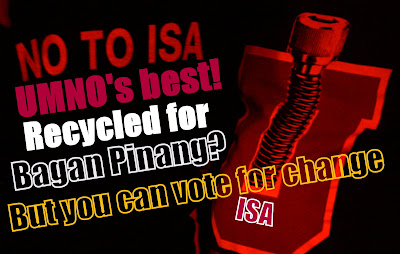 You guys betul betul terlebih when you start dangling, fluttering and waving your ringgit notes at them, that they least expect it and so humiliating! So when you got their backs against the wall, faking a neck injury with the help of another federal institution is a desperate act indeed! LOL!!!

Nice banner. very discreet and subtle but full of meaning.

Keep up the good fight.

Let one and all know that the BP indian votes are confidently for PAS.
A comment by prof dr. chin below.

However, according to Chin, the Indian Malaysian vote will probably be influenced by the Malaysia Makkal Sakti Party (MMSP) and the MIC trying to outdo each other. He says the BN-friendly MMSP will be trying its best to prove to Prime Minister and BN chairperson Datuk Seri Najib Razak that it can get the Indian Malaysian vote. The MMSP's fervour might threaten the MIC, though, which could then be incentive for the MIC to "disturb" the vote.

Influenced ? I really think the good prof. has got it very wrong.
His comment is only theory, but the fact is , at least 90% of the BP indians vote will be for PR through PAS.
The indians never forgot the grave injustices that were shoved unto them for 52 years in all fields.KBP issue is purly a land matter and has nothing to do with the future of indians.Dont confuse the issues.But the "curry kepala lembu" issue has pissed off most ndians who are hindus.
It is now the "in-thing" for groups opposed to PR to get the "affected people"to demo at PR govt. buildings ,of course ,financed and planned by the shit heads like mic mssp and their lackeys.
I understand that a group of indian graduates are now in BP incognito,explaining the real situation to the indian people in a house to house manner, on why they should vote PR through PAS.
MMSP is a farce and if the good prof says that they matter or takes them seriously, then i am forced to ask the prof from where did he get his PHD.Dear poor prof, according to simple calculations,there are 9.5 mil members as CLAIMED by all the indian based parties but NRD says there are about 2.5mil indians in malaysia.Can you see their claims of support,in their mind prof only in their mind.
That mmsp guy thenentiran is playing a game of poker but his cards will show a poker bluff and is now on "sailang mode".this "party" depends on friends and relatives as a personal favour to make up the slimy numbers at their PC and functions.Just go to an indian wedding and you get more numbers than this mssp.
Maybe Mic could distract a few voters by BUY election and hollow promises, BUT will not succeed though they have their structure but a disillusioned structure.
my comments about uthayakumar and wathamoorthy of hindraf[human rights party] is simple.
There were given a garland by the malaysian indians to represent them but it was like giving a garland to a bunch of monkeys.
To the both of them,i say this, stick to PR at all cost or wither like a lotus flower [a one night stand like of bloom]You never had it so good, dont blow it you two arse holes.
I say to the two of you arse holes,
make amends with PR or you both will snuff out the aspirations of the indians and ther future.
Dont ,dont ever dare to make deals with the devil,you have been forewarned.

jong----it was done in jest they hurt their necks looking at the money (as greedy as they are)?????
lol

Can I just remind you the Pakatan Rakyat de Facto Leader was an ex-convict, jailed for abusing his power over sodomy allegations and the most corrupted UMNO leader at that time (using money politics to topple Dr.M ). Being in control of MOF at that time, one of his proxy (ex Bank Negara) revealed he had over 3 billion stashed in various accounts.

So PR actually picked up UMNO garbage for their own recycling !!!! )

Anwar is BIG on corruption. please recall recent PAS party election where Anwar influent has been rejected by grassroot PAS members. Candidates bought by Anwar were all rejected.

So we are not surprised he was confident of buying over a major number of BN MPs about a year ago to become a backdoor PM.
Do your maths. Anwar has to offer money, cos most of the ministry position will be taken up by Pakatan Rakyat MPs. Otherwise, it would not be fair for the loyal PR MP as they need to be rewarded first.
This is just to rebuke PR argument for not using money to woo the BN MP.

Just think!
If Anwar form his own government and reward the jumping MPs all the important portfolios, so where will Anwar place all his loyal PR MPs? second important portfolios? So Anwar has to offer BIG money. Really filthy figures.
Let me do you a favour, we do the maths.

Say, how much do you think that will make the MPs to consider defecting. A figure that will secure his/her retirement in most comfortable fashion. We must remember, they will no longer hold any important position in government coz these are already awarded to loyal PR MPs.
Lets work a figure. Say the MPs are in their 50. That leaves them on average another 30 years to live. Lets plus another 20 years for their immediate family to sustain comfortably since they are giving up important position. So that makes 50 years.
Multiply by 12 (months), That's 600 months!!
Now how much money for these MP need per month to maintain a comfortable and luxury lifestyle? We are looking at the income of CEOs of say mid size company, or perhaps a highly paid Caucasian Expat (since they practice a good lifestlye). I would say about RM50,000 a month. Yes, thats about at least how much most of the elite makes- those you see frequently on Malaysian Tatler. You got to maintain that lifestyle for the sacrifice you make to make Anwar as PM.

Why not? just one third of his coffers? He can make more after that.

So where do you think all the monies comes from especially from PKR to fund the party activities to match or perhaps bettered the BN campaign organizations ? the sky?

Maybe you should ask yourself this question before supporting blindly...

Anon3:51pm....WOW you have convinced me. I am now a born-again BN man. Can I have the honor of meeting you in person. I did not know all this. I am ashamed of myself. Please I need to meet up with you in person to be reaally purged of my old allegiance to Anwar and gang. Will you meet me. That would be the only way for my full conversion.

Wow zorro, I'm also convinced that you are no longer a bully. You really want to meet me? Think not, bully!!
I'm kind of skinny...

Eer.. Zorro,
you whole blog has not been convincing either....
Which makes easy picking...

Dear Zorro,
Once again I agree with your banner.
UMNO's BEST!!!
It should be BN's BEST!!! because UMNO is contesting under the BN banner.
Well done!!!